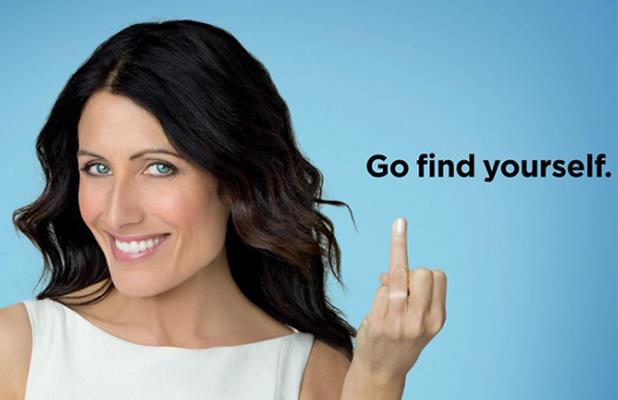 I seriously had to make sure I was reading correctly when I found out the ad pictured above, for Bravo’s newest scripted show The Girlfriend’s Guide To Divorce staring Lisa Edelstein, was banned by both the MTA in New York and the city of Los Angeles.

Reportedly, Metro Los Angeles outright declined the ad immediately (by the way, isn’t most of Los Angeles divorced?), while New York's MTA approved the ad initially, then changed its mind because they essentially didn’t like the nod to the word fuck. However, an MTA rep later claimed they never saw the ad.

In any case, it's hard to understand how a humorous ad about divorce could be considered too offensive for the subway . . . especially in light of other ads that do run on subways.

“The pairing of the extended ring finger with the ‘Go Find Yourself’ is hilarious and smart. This is milquetoast compared to the egregious sexuality and potty humor that you see in many campaigns today. If there aren’t any of George Carlin’s famous seven words, and you don’t see genitalia, sexual or drug-related acts, then it should be fair game.”

Let’s compare this ad to some others deemed just fine by the MTA. 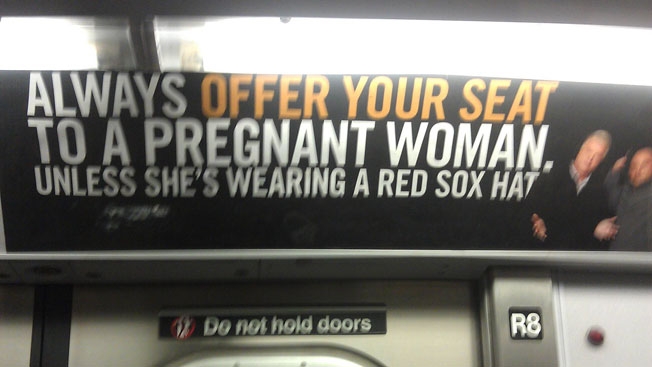 This ad for radio station WFAN is a parody of the PSAs that tell transit riders (correctly) that it’s polite to give their seats to pregnant women, and is not only mean-spirited, but sexist, with men telling other men they have the license to essentially be asses to women. (Though, in all fairness, it’s a bad idea in general to wear Red Sox clothing in New York . . . )

Another one approved by the MTA? 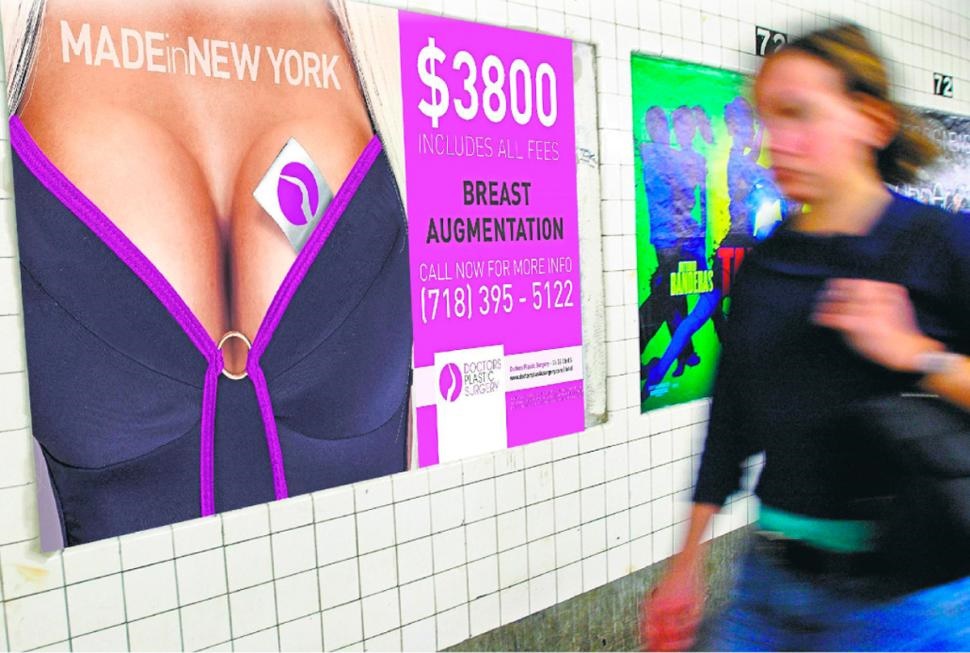 This borders on Skinimax levels of pornographic, and is downright egregious in its objectification of women, who can apparently be reduced to really, really, really big boobs.

And now, for some MTA-sanctioned fat-shaming! 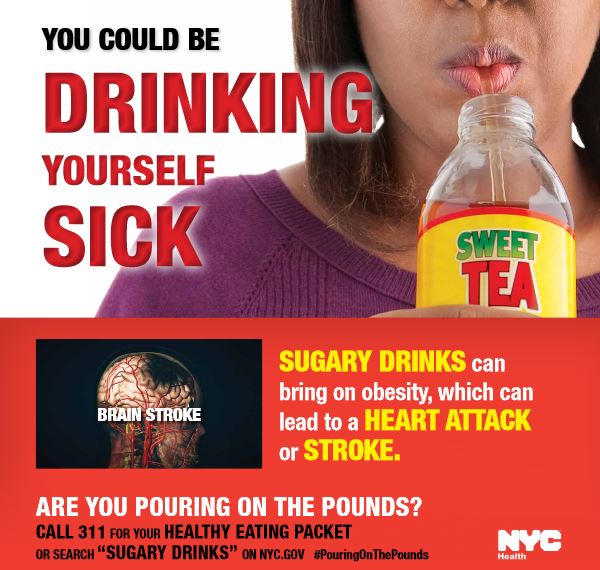 And who could forget the completely misleading ads for Crisis Pregnancy Centers? 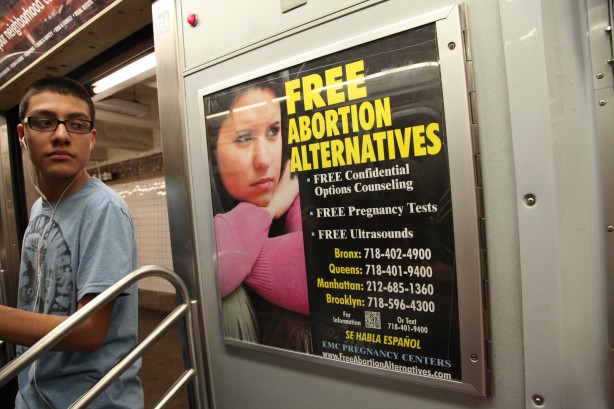 This pro-life group, which essentially tricks women and teenagers out of abortions, used to run tons of ads on the New York City subway. An unexpected pregnancy is crisis enough, without being mislead and misinformed about your choices as a woman. These ads are vague about what CPC’s services are and could be mistaken for those of abortion clinics. CPC’s practices are so egregious that in 2011, a law was enacted that required the clinics to inform clients of whether licensed medical providers are on staff. There have been numerous attempts to get these campaigns to stop, including by Representative Carolyn Maloney. Yet these ads ran for years on the NYC subway.

And just so we're clear that racism is also more acceptable than a divorce-themed ad, here's an anti-Islam campaign that was allowed onto subway cars: 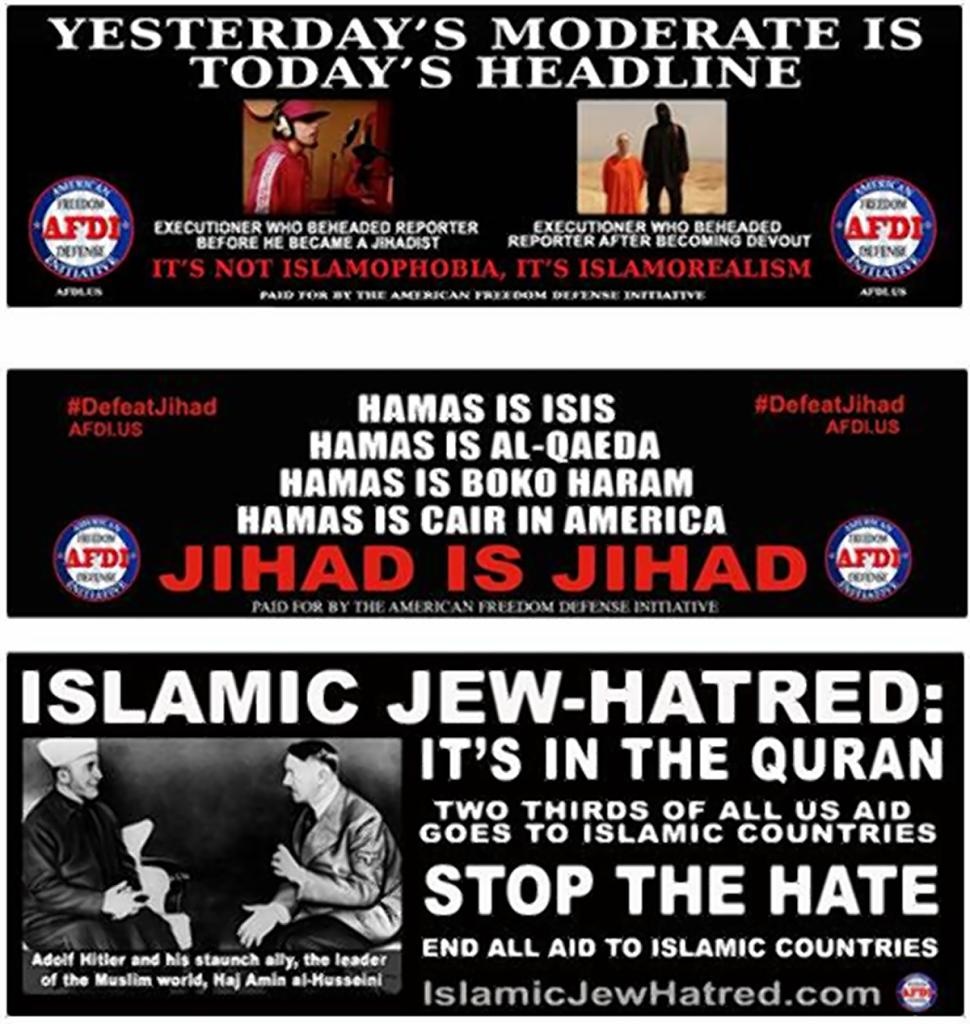 The organization behind these disgusting ads tried unsuccessfully to run similar ads in the past and sued the MTA, claiming it was their first amendment right to put them on subways—and a judge agreed.

So let's get this straight: Blatant sexism and Islamophobia are A-OK, but an ad featuring a woman with agency who's pissed off and trying to find her way post-divorce isn't?

We have just one response to that: 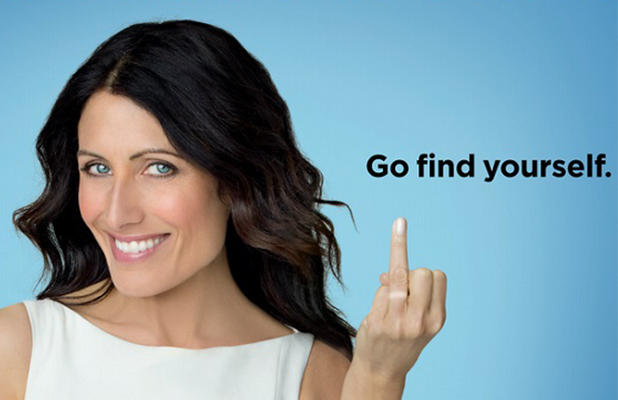