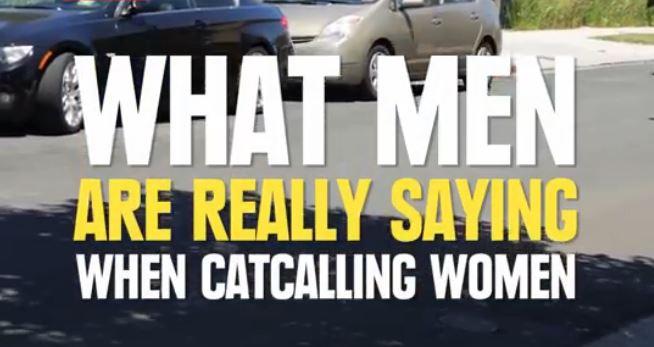 This year offered plenty of both, but particularly in the realm of videos tackling women's issues. From cuttingly clever videos critiquing street harassment to downright offensive ones equating the female vote with wedding dress shopping (yes, that happened), 2014 ran the gamut between commendable and despicable.

Woman Gets Catcalled 108 Times In A Day

The beauty of this video lies in its deceptive simplicity. It features no tricks, no script, no actors; instead, it solely relies on raw footage and one striking number—108 (108!)—to reveal the shocking ubiquity of catcalling. By unflinchingly showing just how much objectification, heckling and even pseudo-stalking a woman confronts while simply sauntering down a street, it bravely deigns to challenge our cultural complacency with a quietly insidious form of harassment.

What Men Are Really Saying When They Catcall

Taking a different approach, this Buzzfeed video challenges street harassment culture with a healthy dose of biting humor, revealing what men are really trying to articulate when they catcall—like, say, "Society makes me feel like I need to objectify you to feel manly!” and “Damn—this is the best part of my day, and I realize how sad that is!" It's clever, pointed and—most importantly—completely hilarious. Who says social commentary can't be a good time?

This video features the divine Gordon-Levitt proudly owning his feminism, saying things like:

“There were some people that were saying that feminism made sense in the past but it doesn’t anymore because men and women are equal now. I’m not an expert but I think the facts are pretty contrary to this.”

SCOTUS' Hobby Lobby ruling was, decidedly, not at all funny. But Funny or Die's video about it definitely is. By featuring the men of the Supreme Court playing in a "no girls allowed" fort, it points out the regressiveness of a male-dominated group making important decisions about women. By the time Ginsberg makes an appearance to muse "Isn't it weird that you're voting on women's issues, and all of the female justices disagree with you?" you'll be simultaneously laughing and seething . . . and that feels just about right.

5 Badass Ladies Of Science Who (Literally) Changed The World

Sometimes, you just want to get your rah-rah on, and this video—which celebrates history's female Science, Tech, Engineering and Math (STEM) pioneers—is the perfect vehicle for feel-good lauding.

UN Shows What It's Like To Experience Sexual Harassment In Egypt

Before the "108 catcalls" video, this PSA was deploying a similar tactic—following a woman during her daily routine—to reveal Egypt's sexual harassment culture. The video, produced by UN Women as part of its "Safe Cities: Free from Violence Against Women and Girls" campaign, leaves viewers with a shocking fact that's sure to linger . . . in the most gut-wrenching way possible.

On a superficial level, this video seems worthy of praise. Cleverly scripted, it calls out the incessant apologizing women are wont to do, especially in professional settings. The problem lies in the video's ultimate message, which can basically be boiled down to: Instead of apologizing all the time, buy Pantene products so you can look beautiful and "shine"! It is, in the end, a pandering attempt to make women feel bad about their hair, rather than a genuine effort to empower women and challenge social norms.

This video is so egregiously sexist, it seems at first glance like a parody mocking the GOP's fraught relationship with women. But oh, it is real. Very, scarily, hilariously real.

Paid for by the College Republican National Committee, and titled “Say Yes to the Candidate,” it compares voting to choosing the right wedding dress . . . presumably because the only thing women can relate to is bridal fever and dumbed-down TLC shows. Worse yet, the ad was made in bulk, with the female protagonist at turns "saying yes" to Rick Scott, Rick Snyder and Tom Corbett. Because, you know, who cares about a politician's credentials or agenda, when there's a dress to swoon over?

Actually, we were wrong. According to the GOP, women don't only care about wedding gowns. They also care about dating! In this equally tone-deaf ad, a woman discusses her growing distaste for Obama like it's a relationship with a lover gone awry. The video was criticized for its undertones of abusiveness. And, once again, it's predicated on the idea that women can't possibly care about policies and agenda items and stuff. Because . . . dresses and boys!

Oh, GOP. May you stay ever-classy and progressive in 2015.