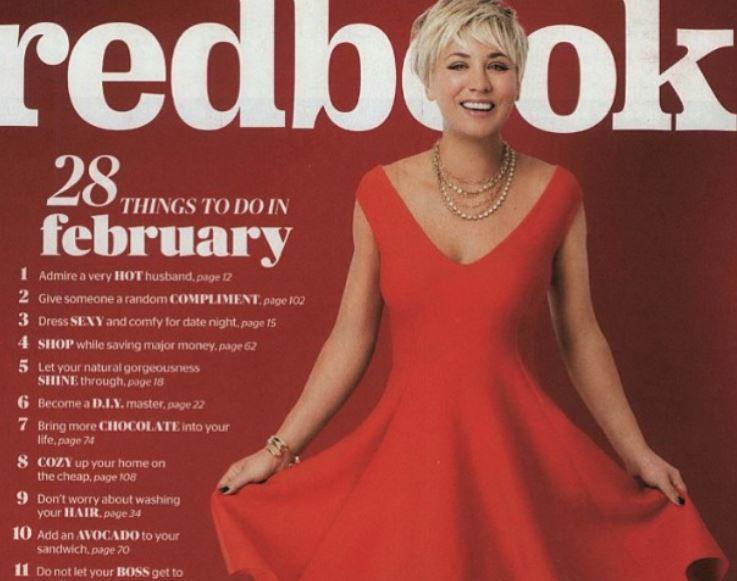 On CBS' The Big Bang Theory, Kaley Cuoco plays Penny, a busty, scantily-clad blonde bimbo who is lusted after by a group of brilliant male nerds.

But lest you think this very premise is rooted in entrenched sexism, Cuoco has let the world know, via an interview with Redbook, that:

Sure, this morning she backpedaled a bit on her quote by offering up a half-hearted apology about how "completely blessed and grateful" she is "that strong women have paved the way for my success along with many others." But she's yet to say anything about that whole inequality business, which leads us to believe she stands by her assertion that it simply doesn't exist.

What great news this is! How lovely, how wonderful, that we can live in a world so blissfully free of misogyny and gender bias! To celebrate the apparent demise of gender inequality, we decided to take to the interwebs to explore the many ways in which Cuoco is never treated unequally or unfairly as a result of her gender, nope never not at all.

In a story ostensibly about her soaring career, Business Insider referred to Cuoco as "CBS' favorite primetime blondie."

*The story excluded any mention of Cuoco's co-stars as primetime's favorite brunette males.

In a Comcast/Infinity TV Blog interview, Cuoco, referred to as that actress "known for playing the role of hottie on TV," was asked if her co-stars were actually nerdy in real life—and, in a totally similar vein, if she had ever dated a nerd in real life.

*No word on if Cuoco's male co-stars have dated female nerds in real life.

Last year, in an Entertainment Weekly post about Cuoco's freshly cut hair, one man in the comments section, veering rather wildly off the topic of Cuoco's locks, wrote:

"Some ladies . . . are trained predators. knowing full well that biology is on their side, they use sexuality to wheedle, trick and complain their way into a man's wallet, life & psyche."

"If you were attempting to bang [Cuoco], pepper spray would be involved."

"That would be one horrible lubricant."

*We found no mention of the merits of pepper spray as a lubricant for Jim Parsons' sexual encounters.

On the blog Fishwrapper, a woman posted pics of "hottest thing ever" Cuoco in a bikini and wink-winked to her male readers:

"The proof is in the pictures, guys—no cuts, all butts shaped like tasty coconuts."

*We found no evidence of the asses of Cuoco's male co-stars being compared to coconuts—delicious or otherwise.

"She has one of the most impressive bodies around—from her store bought rack to her awesome white girl booty. But that face . . . I really like the girl but if you look close enough at her face, it can throw off the whole package. Cutting her hair recently doesn't seem to have detracted from it. However, if she were to continue to have the older lady sex kitten hair, it would have just aged her even more.

While I have those issues with her cranial appeal, it's easy to categorize Kaley Cuoco as being sexy. She's funny, she carries herself fantastically and damn, that f*cking body. Every interview that I've seen with her showcases that she's amazing outside of her CBS show, so even if she never really skyrockets into a lucrative career post-Big Bang, she's still a babe that I could easily see as a beer-and-a-game-hanging-out type. I vote hot."

*We do not know if Cherry Liquor, or anyone else, considers Johnny Galecki's white guy booty to be suitably hot.

On Break.com, a man shared his fantasies about Cuoco, the talented and accomplished actress, in all her naked glory.

"If you were to ask one of the brainiac characters from 'The Big Bang Theory,' they might be able to design some kind of hologram, time machine or alteration of the space-time continuum to allow a viewer at home to imagine what the blonde starlet would look like nude. For those of us stuck here in real life (darn you, poetic justice!), our imaginations are likely as close as we can get to seeing her in the buff."

*What would Cuoco's male co-stars look like nude? We haven't waxed poetic about such fantasies. And as far as we can tell, nor has anyone else on the Internet.

Taking things a step further, another man on the Internet shared a doctored photo of Cuoco with her giant boobs bared and legs spread as a gesture of sexual welcoming.

*Sadly, we could find no such photos of Cuoco's male co-stars.

So there you have it: all the ways in which Cuoco never ever has to face sexism or misogyny or anything else remotely like that. Based on our research, we totally get why she doesn't identify as a "feminist girl demanding equality."

If you like this article, please share it! Your clicks keep us alive!
Tags
kaley cuoco
redbook
Interview
feminism
not a feminist
Inequality
apology