Meet Our New Everything: Carmen Dell'Orefice, The 83-Year-Old Working Model 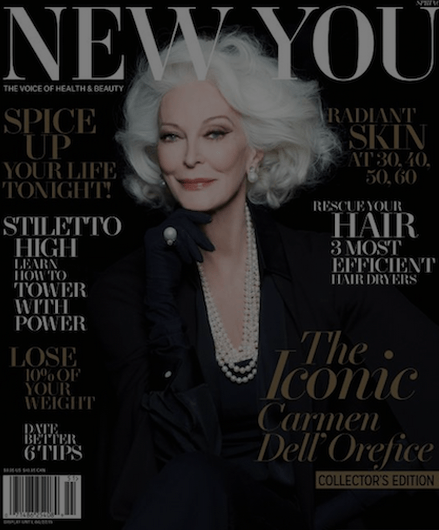 Ohhh right, because posessing both is a physical impossibility. Like tasty low-fat bacon. 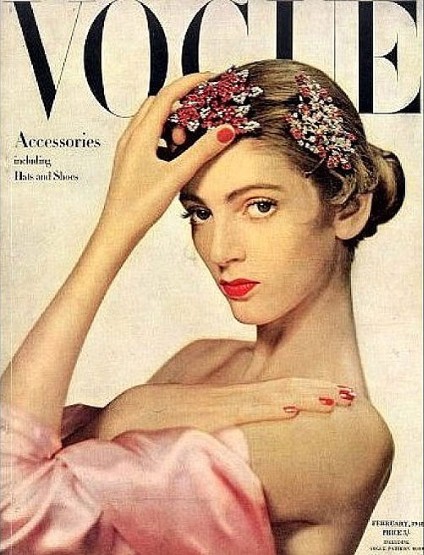 She's still gracing covers at age 83—and looking divine. In fact she just appeared on the cover of New You magazine, looking so smoldering and minxy—and those cheekbones, good grief!—that Gisele is probably green to the damn gills.

In honor of Dell'Orefice's utterly epic career (more on that in a minute) and her very existence serving as a stark and shining reminder that come 45 we need not all don bobs and high-waisted khakis and self-castrate, we thought we'd give you a brief biography of a woman we decidedly admire.

This Was No Norman Rockwell Tale

Dell'Orefice did not come from privilege or a life of ease; in fact, her childhood was rather harrowing. Though she later reconnected with him, her father abandoned the family when she was a young girl. Left alone with her mother, the two lived in poverty. Actually, they were so very poor that Dell'Orefice was occasionally left at various foster homes while her mother scrambled to earn money.

Now, the mother-daughter bond here isn't what you'd call a Lifetime Original special either. Dell'Orefice's mother was abusive and distant, and the story goes that Dell'Orefice strived to impress her mother in the hopes of feeling more love. Modeling was a means to accomplish this. Dell'Orefice—as a teen, no less—managed to support her mother through her modeling jobs.

"My mother taught me how to sew, how to upholster, how to cook, how to wallpaper, how to count the pennies. Our rent was $30 a month, and we’d often be a few dollars short, so at the end of the month, we would sometimes have to pawn the sewing machine, which was a tragedy," she told the DailyMail.

To save more money, Dell'Orefice even roller-skated to her gigs. (Oh, and her oh-so-lithe frame grew so extreme it raised concern amongst doctors; she was deemed malnourished, and prescribed shots to help her develop.)

Remember what it was like to be 15? (Wait! Don't throw yourself out a window!) Well, at that age ripe for awkwardness, Dell'Orefice was "discovered" by a well-connected friend of her father's, and forced hide her braces while on set. As a budding model (who landed the cover of Vogue), she had to pull her mouth in a particular way to hide evidence of her metal-clad teeth. And don't lie—you know just the face we're talking about. (And yes, Dell'Orefice used her modeling money in part to pay for her braces.) 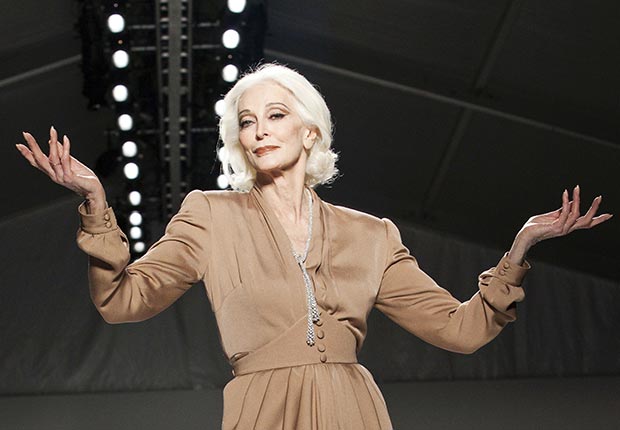 Her Career Is A Name-Dropping Blur Of Glamor

In the last 15 years alone, Dell'Orefice has scored jobs that would make models a quarter of her age drop a knee in admiration. In 2000, Dell'Orefice appeared in John Galliano's Dior haute couture show—at 69. Four years later, she showed some love to Jean Paul Gaultier's first show for Hermès. She then spent much of the 00's lending her look to Isaac Mizrahi. Over the course of her career, Dell'Orefice has worked with esteemed photographers like Richard Avedon, Irving Penn, Cecil Beaton, and Horst P. Horst. But interestingly enough? She doesn't think of herself as a cover-girl . . . or feel the light waning on her presence.

"As a model, I didn’t have an identity; I was a chameleon, a silent actress. I was an amorphous thing," she told the DailyMail. "I wasn’t full of personality, I was full of solitude and solemnity. I wasn’t a cover-girl type. I’ve had more covers in the past 15 years than I had in all the years before that."

You Could Totally Party With Her And Talk Politics

Okay, maybe you wouldn't be dancing on tables until 3 AM—but Dell'Orefice has a reputation for being one cool cat. Not only is she consistently described as "warm" and "respectful," but she is humble. And funny.

And the diva disease never ravaged her ego.

"It took me half my life to understand who I was," she admitted to the DailyMail. "How could I be true to anything when I didn’t know myself? I am able to be truer and truer with myself the older I get, but I am still a work in progress. You don’t have to like me, but I’m not going to please someone for the sake of their approval."

Oh, and girl-talk? Yeah, you bet. When asked by the Telegraph if sex was still important to her, she quickly shot back: "Is breathing important?"

Dell'Orefice pulled no punches in where she stands on reproductive rights either, telling the DailyMail:

"Did I regret my abortions? Frankly, no. I got over Catholicism and guilt when I was eight. I made my Holy Communion, but by the time I made my Confirmation, I had resolved that it was a crock. Women need to wake up. If the US rescinds Roe v Wade [the landmark 1973 decision by the US Supreme Court that effectively made abortion legal], women don’t realise what it will mean for the rest of their lives. And what it will cost the government, to deal with all those unwanted children dumped on society."

And despite physical beauty serving as her foundation for more than 68 years, she doesn't take any of it all that seriously. Her skin saving fave? Bag Balm. Fetching just under $4 at most drugstores.

What do you think? Are we ready to build a shrine or what?