There's Love In This Food: 4 Dishes That Helped Me And My Friends Through Crisis 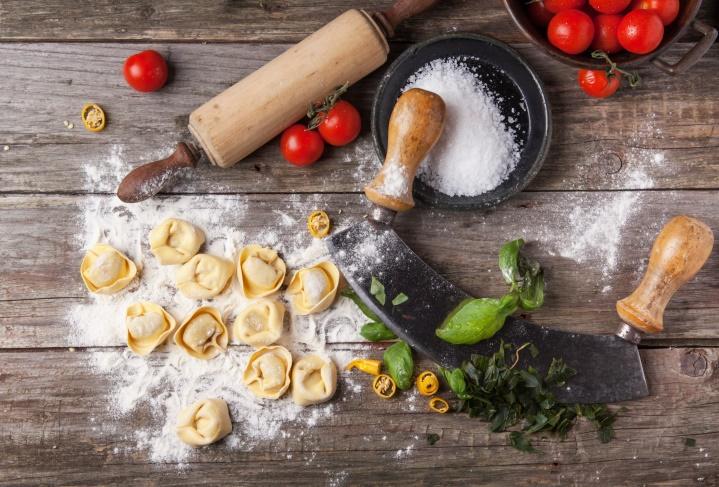 Sometimes, food is an expression of love.

I was never fully aware of food's healing power until I heard the song "There's Love in My Food" on a little-known CD called "Somewhere Else." On it, Killian Mansfield, a teenager stricken with a rare form of cancer, accomplished his dream of recording with artists he admired, including Levon Helm and Kate Pierson of the B-52s, who loaned her vocals to the tune. Not to put too fine a point on it, but the mélange of musicians who pitched in to make the CD were like the ingredients it takes to make a satisfying meal. Sadly, Killian passed away a few months after the CD was completed. But its message lives on.

It's a message I recently realized I've been living all along: Especially when someone's hurting, physically or emotionally, food can be more than nourishing. It can be redemptive.

I'm not talking about chowing down to soothe wounded emotions or polishing off a bag of Pepperidge Farm cookies in front of the TV because you're lonely. I'm talking about taking in, viscerally, the thoughtfulness that's been put into a meal.

I paid homage to the notion of food as an expression of love in my novel, The El. (There are dozens of recipes for dishes included in the book on the Facebook page. In fact, the photos here are lifted from it.) In Chapter 31, when a character is convalescing, her friends, family, and neighbors bring her wonderful dishes—the very best parts of them. I explain it like this:

"Day by day, Rosanna felt a bit more renewed. She attributed this partly to rest, but Rosanna also liked to think that her swift recovery was due largely to the healing food that was brought to her. Besides being delicious and filled with strengthening broths, hearty root vegetables and such, it was also filled with the love of her family, friends and neighbors. She could taste it in every spoonful, could detect it in every bite, as sweet and thick as honey on her tongue."

Below are some stories about how food has provided emotional renewal in my own life—plus recipes so you can bring these dishes into your home . . . or to your own friends in need. 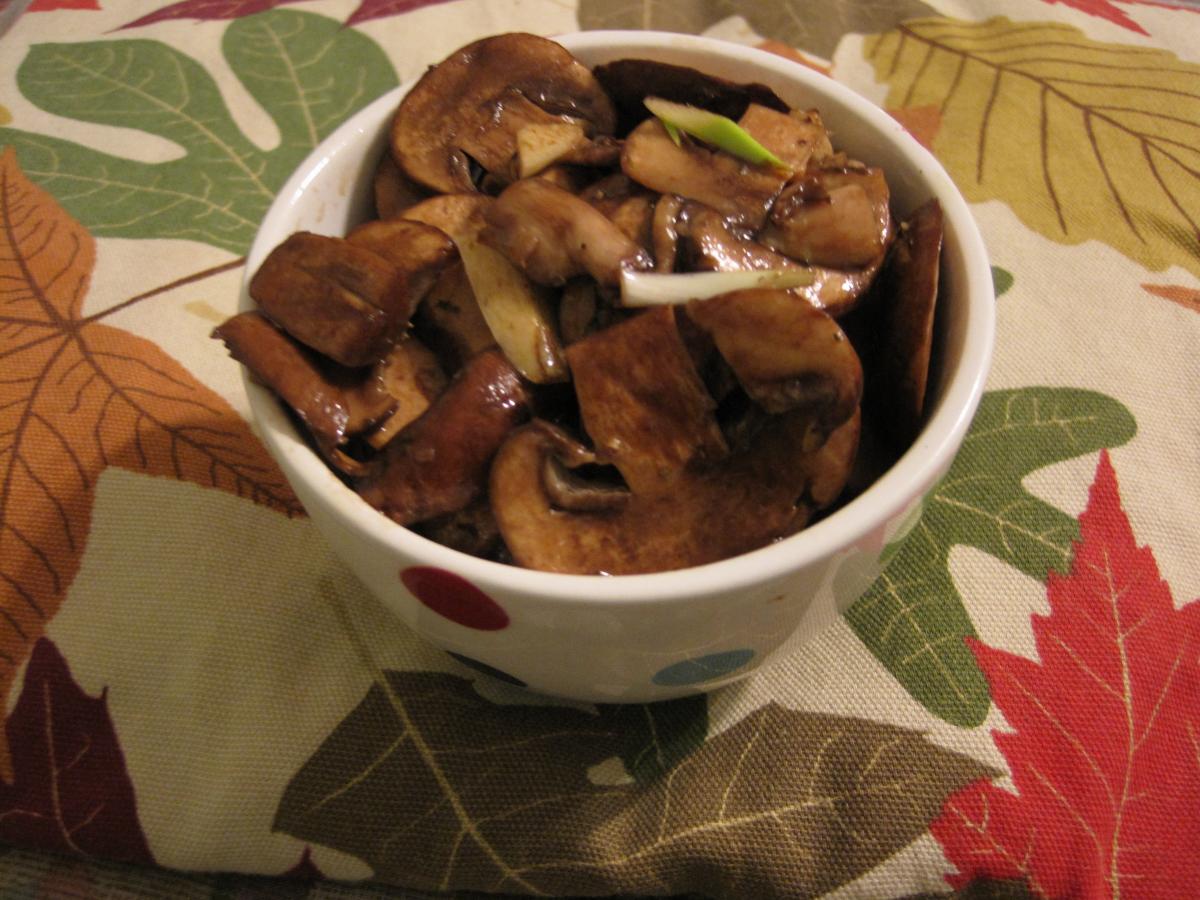 I'll never forget when I was hovering on the periphery of postpartum depression, recovering from a C-section and struggling to care for a colicky newborn. I was glad to have visitors, yet not quite up to entertaining.

And then, he left. I didn't have to try and carry on an intelligent conversation with my "baby brain," or struggle to be a good hostess. I just had to eat.

Similarly, while I was recovering from a mastectomy, my friend Claire breezed by with a treasure trove of Italian dishes—marinated mushrooms, succulent eggplant, olives. "You don't want me to cook for you," she joked—only Claire wasn't joking. "I'm good at assembling meals, though."

I decided that this was the best thing you could do for someone who's convalescing: feed them. It was some of the best treatment I received.

Place sliced mushrooms into a medium-sized bowl. Add garlic cloves, mix. Put olive oil, vinegar and basil into small jar and shake vigorously into well blended. Pour over mushrooms and toss. When well-blended, put mushrooms into plastic container and give a final shake before putting it into the refrigerator. Chill at least 2 hours, giving it a good shake a couple of times. When ready to serve, place in bowl and allow to reach room temperature. 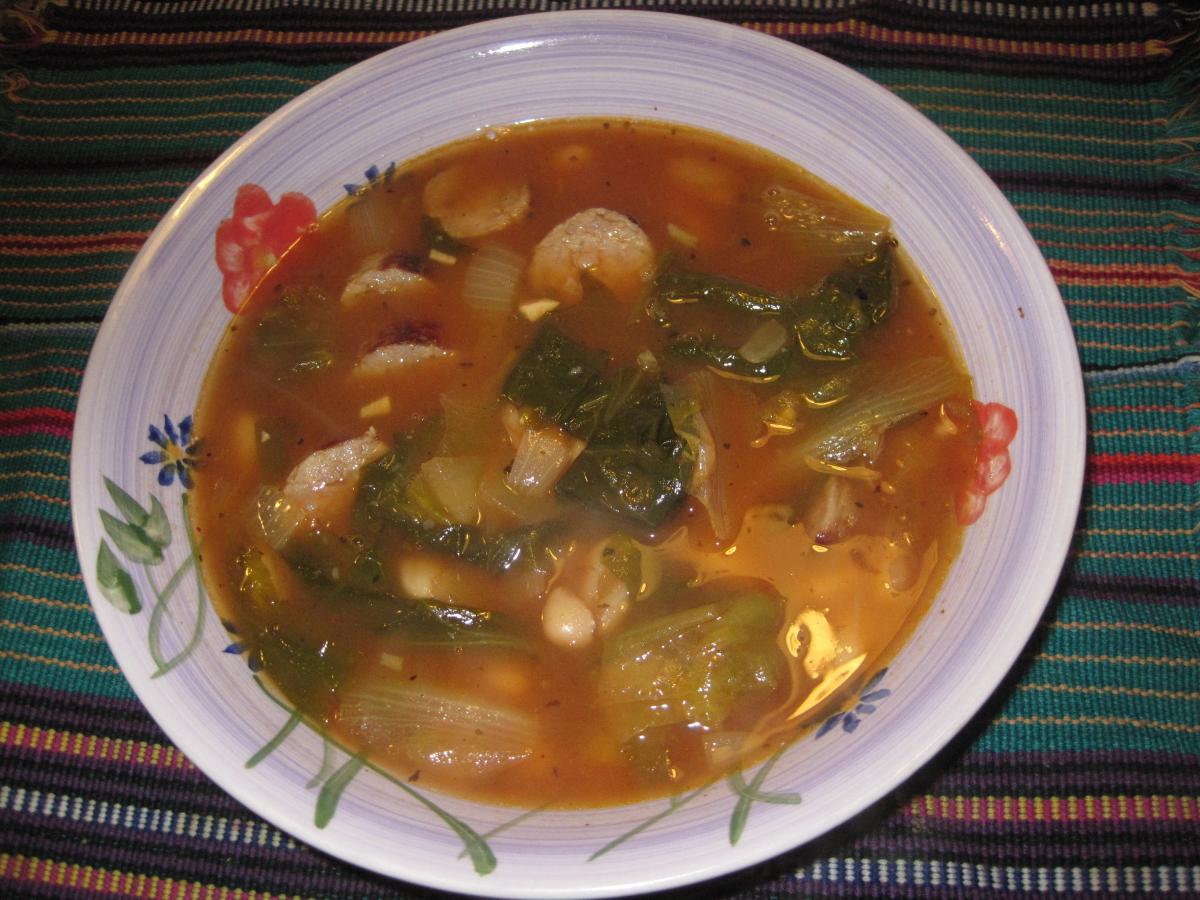 Many years ago, Neil Sheehan, a fellow firefighter of my husband Peter, was stricken with brain cancer. Neil had remarked to one of their comrades that he really missed Peter's escarole and beans. For a pure Irish guy like Sheehan to be craving Italian soul food was really something. So, on his day off, Peter made a big pot of 'scarole and beans, browning the sausage, onion and garlic just so, then adding the cannellini beans, fresh greens, and chicken broth. He then took a thermos to the hospital and fed his friend the dish. There are so few true pleasures you can give someone toward the end of their life; a good meal is one of them.

1 19 oz can cannellini beans (with liquid)

Brown sausage in olive oil in large pot. Set aside. In same pot, sauté chopped garlic and onion in sausage grease until soft. Add spices and cook a minute more. Add tomato sauce and chicken broth, heat to boiling. Add escarole and cover. When escarole cooks down, add cannellini beans and their liquid. Simmer uncovered 15 minutes, so flavors will meld.

Cut cooked sausage into ½ inch thick pieces and add to escarole/bean mixture. (If including cooked ditalini, add now.) Stir to blend. Simmer 15 more minutes then ladle into bowls. Top with grated cheese. Serve with crusty bread and a side salad. 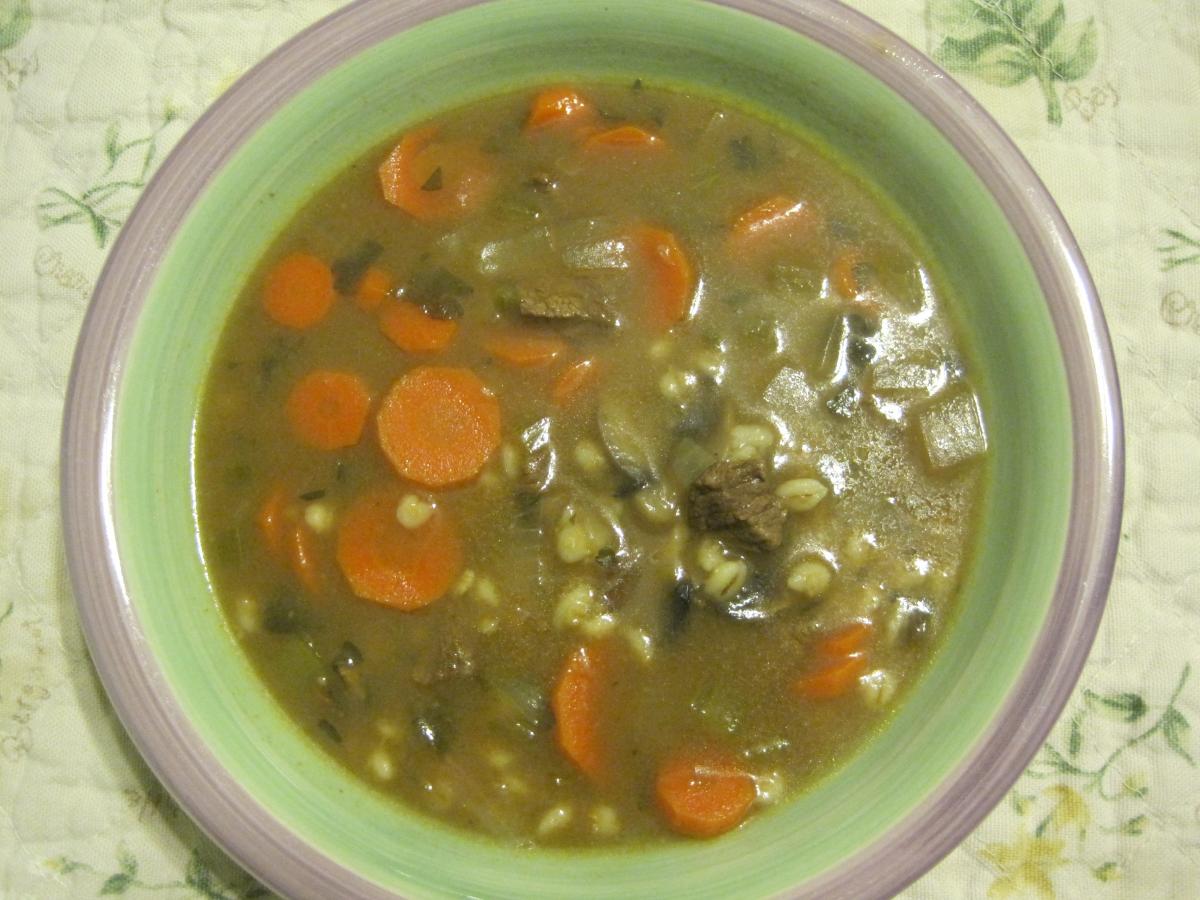 When our friend Jim came home from Sloan Kettering after being diagnosed with late-stage liver cancer, I dropped off dinner in a paper shopping bag for Jim and his wife Marcia. Peter made a batch of his famous Texas-style chili while I whipped up some cornbread. Petit fours embossed with treble clefts completed the meal. The significance of the musical dessert wasn't lost on them—Jim was a bass player. Marcia wrote later, thanking me: "The icing on the cake was the beautiful woman who delivered the goodies."

After Jim passed away, I bolstered up Marcia with frozen goodies from my bounty: vegetarian chili, chicken soup . . . I even hung a bright bag filled with Christmas cookies from her doorknob as a sweet surprise. "I was already so happy with the good things you brought me—so delicious and nurturing," Marcia wrote, "but thank you again for the new infusion of cookies. You are the dearest family."

One of the dishes I cooked for Jim and Marcia when he was battling cancer was a hearty beef and barley soup (plus homemade chocolate chip cookies for dessert). 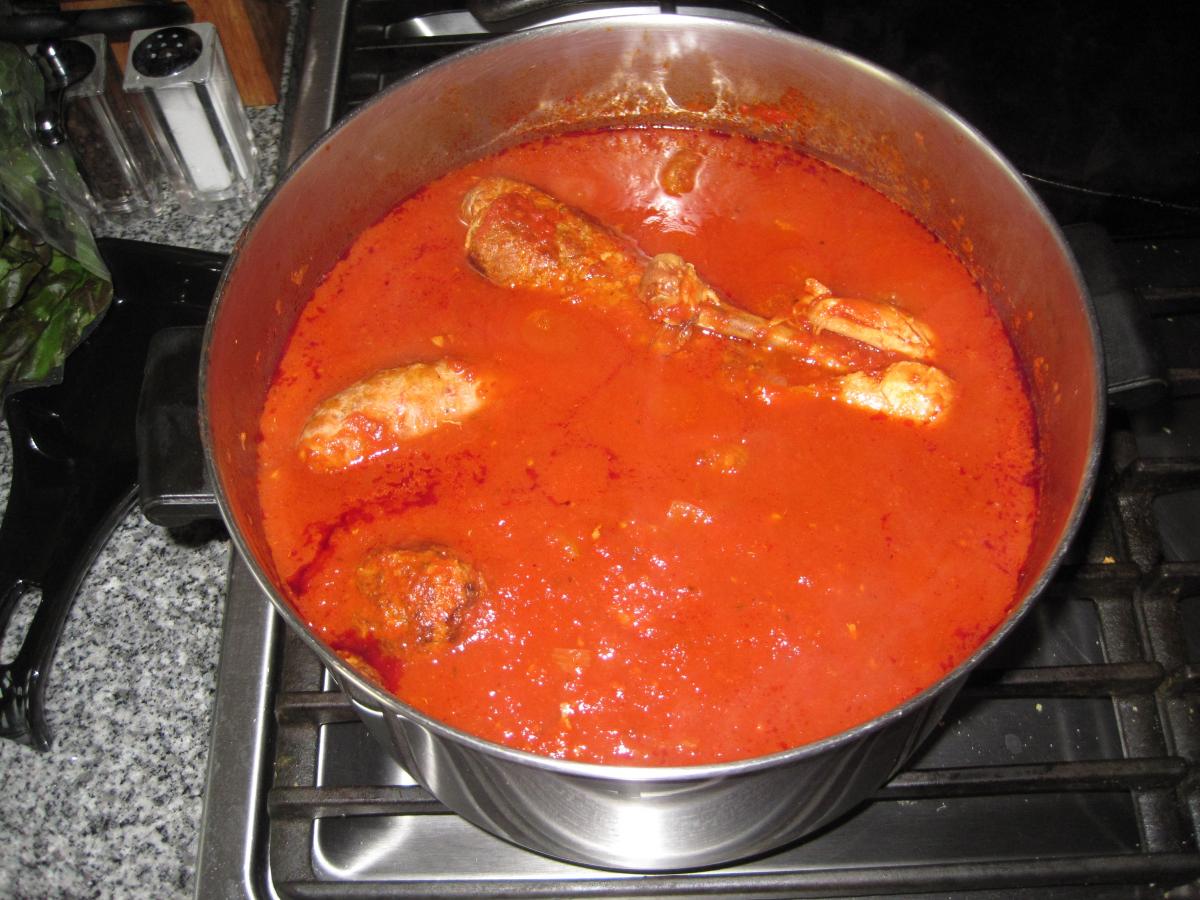 This summer, when a good friend had a hysterectomy, I dropped off an entire pasta dinner from soup to nuts—a red gravy brimming with meatballs, sausages and other meats, a box of pasta, even salad. The last thing she should have to think about, I decided, was feeding her family.

Optional: pigskin, stick of pepperoni (parboiled first to get rid of some of the grease), a dash of red wine

Brown the meats in a frying pan that has been brushed with a small amount of olive oil. Remove to bowl when done. In a separate pot (3 quart or larger), cook garlic and onion until slightly soft. Add basil, oregano and parsley. Add the crushed tomatoes and tomato sauce. Add a small amount of water to clean out the cans and add to pot. Bring to a light boil. Add meats, cover and simmer for 2-4 hours, until the bright red color mellows into a rich orange hue. Stir occasionally and taste. If the sauce seems a bit acidic, add a dash of sugar to neutralize.

Serves 10-12. Enough for at least 2 pounds of pasta. Freezes well to enjoy later.

I highly recommend sharing the love in food. It's simple and rewarding—and a reminder of how much meaning a simple cup of soup or bowl of mushrooms can hold.