Across The Steven Universe: Queerness In Our Cartoons 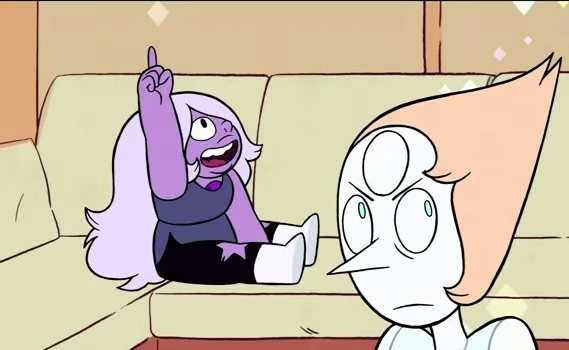 There needs to be more positive representation, or representation at all, outside of just my Twitter reimaginings of what I grew up with under the tag #KidShowsButQueer.

“Hey ma, look, I’m on TV!” is something I really wish I could've cried out in a joyous fashion growing up; sadly there weren’t very many, if any, fat queer outcasts who had crushes on the other girls on any show that I watched growing up.

From time to time, these characters will appear on children’s shows, but normally as a lesson to learn from. We’re constantly portrayed as a token after school special about how everyone deserves to be treated equally, and always shown in scenarios in which there is heavy bullying. Kids will mimic what is presented to them in the media, and if what they are shown over and over again is that the queer kid is always the victim and the odd one out, then that must be the way it is in the real world. There needs to be more positive representation, or representation at all, outside of just my Twitter reimaginings of what I grew up with under the tag #KidShowsButQueer.

Thankfully there has been some huge movement forward in the world of cartoons over the last several months, but this is not to say that this has come without obstacles. Cartoon Network seems to be at the forefront of this movement, but still hitting some censorship hurdles that come across as fuzzy regarding who is making these decisions.

Back in October, Clarence almost aired the first gay kiss on a children’s show, which would have taken place between two cis gay male adults, but replaced it with just a kiss on the cheek. The same show does feature a lesbian couple as the parents of one of their main characters. The Nickelodeon show Legend of Korra has openly queer characters, in their older teens, but they were only broadcast online as opposed to directly on television.

And then as of the season one finale of Steven Universe we received another glimmer of hope in one of the queerest episodes of a children’s show in television history.

Steven Universe has had a lot of firsts, one of which is that the show—created by Rebecca Sugar—is first on the network solely created by a woman. It also features many people of color both on and off screen. The representation continues throughout the show featuring a lot of narratives that normally aren’t touched upon.

The plot centers around Steven, a young overweight boy who is half human and half gem; Steven is raised by his father Greg Universe, who lives out of a van, and three gems: Garnet, Amethyst and Pearl. The gender of the gems is never specifically addressed since they aren’t human and don’t quite follow the binary view of “sexes” we encounter from day to day, although they all utilize she/her pronouns. Leading up to the finale, we see a moment where Steven and his close friend Connie dance together and end up fusing into one person known as ‘Stevonnie’. Stevonnie doesn’t use any gendered pronouns and presents fairly androgynous—oh and everyone they encounter admires them and is somewhat flirtatious as a reaction to their presence.

This fusion of the gems becomes more prevalent in this queer subtext in the season finale. In the second half of this episode—entitled Jail Break—all of the gems end up imprisoned on a spaceship by a group of nefarious gems who are headed back to their homeworld. Steven, who we learned a few episodes earlier, has harnessed the powers of his mother Rose Quartz because only one of them could survive; she has become a part of him in order for him to live on. It is assumed that one of the reasons for them being captured is they want to destroy Rose Quartz once and for all. His powers end up making him impervious to the force field keeping him captive, and Steven escapes to search for the Garnet, Amethyst and Pearl.

On his hunt throughout the ship he finds, and rescues, a gem named Ruby who begins frantically looking for Sapphire. Eventually they find her; Ruby and Sapphire immediately rush towards one another; they embrace with tears brimming in their eyes. They have a very emotional exchange before Ruby lifts and spins Sapphire around until they fuse into one gem—Garnet. Garnet tells Steven to find the others and that she will fight Jasper, the leader of the gems that captured them.

When Steven expresses concern over her ability to beat Jasper on her own, she responds “It’s okay, Steven, I’m never alone.” Garnet is so overjoyed that she sings a song called Stronger Than You about how together they are better. And just in case anyone was skeptical of it being anything more than friendship, one of the writers has described the relationship between Ruby and Sapphire as “romantic, yo.”

Hopefully soon—and not in a universe far far away—we won’t have to clarify with the writers of shows as to whether or not the characters in our beloved cartoons are gay. Until that point, I need to think of each tiny step forward in Steven and Mr. Universe’s positive mantra: “If every porkchop were perfect, we wouldn’t have hot dogs.”

If you like this article, please share it! Your clicks keep us alive!
Tags
steven universe
rebecca sugar
queering cartoons

On Being A Fat Wrestler
A.V. Christensen

Across The Steven Universe: Queerness In Our Cartoons
A.V. Christensen