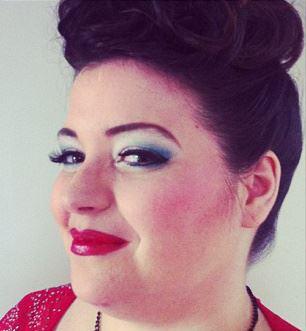 A.V. Christensen is a wrestler and founder of Femmezuigiri.

Recently on Twitter, #GiveDivasAChance was trending, and it was almost a relief to see the problem surrounding women in the sports entertainment world being acknowledged on a larger scale. For those of you who don't follow the world of the WWE, you may not know that their commentators constantly acknowledge throughout their programming what's trending in regards to the WWE on Twitter, in an effort to be on the ball and seem plugged in and interacting with their fans.

To no one's surprise, this hashtag was grossly overlooked.

The Divas is the name of the women's wrestling division within the realm of the WWE, and a name like that is just the tip of the iceberg in terms of how they view women. On top of that, the title belt is a big, pink butterfly, and a fair amount of their employed wrestlers are fitness models. Don't fit their designated aesthetic? Aren't stereotypically "pretty" enough? Well then skill be damned, you aren't getting your shot on television.

This hasn't always been the case, considering they used to employ larger female wrestlers, such as Bull Nakano from Japan, but the women have always played second fiddle to their male superstars. Their matches will be bumped entirely from a show if a men's match runs overtime, they only get one dedicated match per show, some male superstars have entrance themes that run longer than an entire Divas match, and most of the storylines are entirely centered around looks or being the love interest to a man and petty schoolyard romance dramas. These women aren't being allowed to highlight their skills that they have busted their asses to develop. Unless you can be viewed as a sex object, you aren't worth promotion in their eyes.

This has trickled down and affected the indie wrestling circuit as well. Growing up as a woman, I was always seen as an outsider in the boys club of wrestling fandom. Thankfully, my dad was happy that one of his children was actually willing to watch it on TV with him on visits, and we would make a big deal about renting a Pay Per View together. At the time there was a small amount of women being represented, but they were always tough. Even Chyna, whose entire gimmick was that she was ugly and big, was allowed to fight the men. I got the itch in me as a kid to want to fight. But I never thought I'd be welcome in this world, so I shelved my desires.

In case you aren't aware, I am a fairly fat individual, so it's already a bit of a hassle to be taken seriously when it comes to fitness and participating in sports activities. Add that to being queer and a lack of masculinity, and you end up with a winning, or losing, combination in terms of acceptance.

I ended up getting involved backstage at local wrestling promotions instead. I learned how to set up a ring, picked up tips and tricks from other wrestlers, and got a better feel of what it was like to be in that environment live. Sadly, I rarely saw any female performers participating in said shows. Fast forward to 2014, and I caught wind that there was a small feminist promotion called the League of Lady Wrestlers; they started as a performance art collective in Dawson City out in the Yukon but had one Toronto show called the Hogtown Throwdown. I immediately reached out and expressed my interest in being involved in any facet, pitched my character to them, and was shortly added to their roster after. It was like instant gratification; I didn't have to worry about my appearance, or desirability, or sex appeal, or gender identity, or sexuality. And so on and so forth.

Doughnut Messaround is my name, and playing up the fat card is my game. Other wrestlers in my league play on typical stereotypes—such as Dykemaster 3000, a butch dyke who has a manager in a giant penis suit named Dick; Ladyboy, a gender-bending character in drag who is quite the ladies' . . . lady; Cuntzilla, a swamp monster with vagina dentata; and many more.

Just as quickly I was accepted into a league with a bunch of amazing feminist women, and all seemed okay in the universe, there was the realization that we needed to train with professionals. Of course, these professionals are cis hetero men who don't seem to be properly equipped to handle having women in their spaces. We were given private lessons apart from the rest of the students so that we could train as a league, but it wasn't enough for me. I decided to reach out and look into training full time; I had gotten a taste for the ropes and I wanted more. Training was three days a week, but it was a strain financially to meet. Never fear: "We have a discounted rate for female students." I inquired as to why this was, whether or not the training was less intense or less frequent, but was just told that was how it was. Normally, I'd be one to fight against gender inequality, but this is one of the few times it worked in my favor, so I kept my lips zipped.

My first day of classes arrived, and when I showed up, everyone seemed shocked to have me there and immediately jumped into a mix of mansplaining what wrestling is and flirting with me. There was a lot of condescension in terms of my ability. Whenever I'd have trouble with a move, instead of being met with a solution or an attempt to teach, they would share one of the following responses: "Well, you're too fat to pull it off" or "Girls always seem to have trouble with that move." My favorite being "Women are allergic to leapfrogging." This was all said with a completely deadpan look on their face. No one thought they were being cheeky; they truly believed that women and fat people were less adequate.

The funny part about this is  that there are plenty of fat men, and women, in wrestling, and they are more believable in cases due to their size factor being an advantage. My in-ring experience was written off because it wasn't "real wrestling." It seems their deciding factor on whether or not it was real was the lack of men involved, since it was done in a professional ring and with the same moves they were using.

What was even more upsetting was how the women who would come to the gym to help out would feel toward female wrestlers. Complaints would be raised by me that local promotions didn't include women and they would retort, "Well, no one wants to pay to see women fight." Obviously, the right market is not being tapped, considering the Island Rumble, which was my first-ever match, sold out to a crowd of 300 people well in advance of the show itself, with many demands to release more tickets.

I wonder how much of being excluded since I'm a fat girl is from social stereotypes in sports, and how much is from the fact that the primary example we have for us in the media doesn't support women. The problem exists everywhere, and we need to start somewhere to fix it. Until then, my dreams of falling down and getting beat up for a living will only be fulfilled emotionally as opposed to physically. I can support my feminist league by providing alternative narratives to smash the patriarchy, wear queer-as-all-get-out shirts to the gym, and yell at the top of my lungs on the Internet, holding out hope for someone bigger taking notice.

Remember, I may be fat, slow, and a dyke, but I can still throw down, knock you over, and make you cry and tap out of even the simplest Boston Cream or Camel Clutch. I'm still wrestling and I refuse to lose weight to conform to your narrative of what you feel the public will buy into as a pro wrestler.

If you like this article, please share it! Your clicks keep us alive!
Tags
the conversation
WWE
divas
gender inequality
sports
wrestling
gender
men
women

On Being A Fat Wrestler
A.V. Christensen

Across The Steven Universe: Queerness In Our Cartoons
A.V. Christensen