From Baseketball To Death Race 2000: Movie Recs From The Sexy Film Librarian 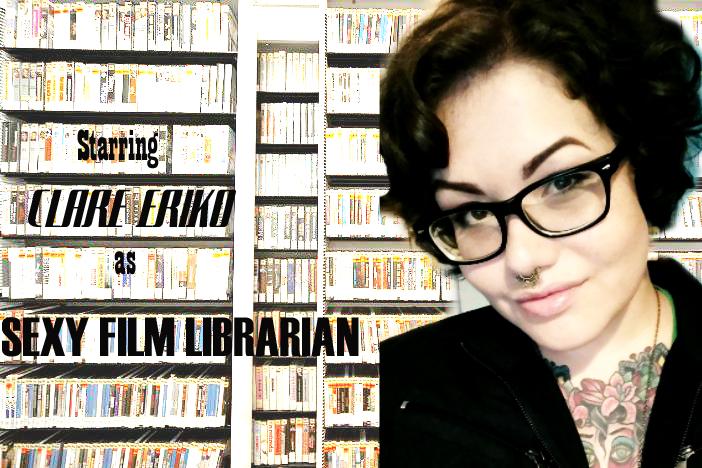 In which our resident cinephile and discerning critic offers advice on a sports and campy cult film double feature.

In addition to preserving our dreams of bookish babes with but the baddest of sides, librarians often provide what are called “reader’s recs”—informed book recommendations based on the expressed needs of the patron. It’s an invaluable aid for those of less well read who don’t know where to begin with finding something to keep us getting out of bed.

This tool was once denied the movie-going masses. Film criticism, skewing toward the current, focuses on whether we should see a movie amidst its theatrical run. There are few places where we can ask for advice on what movies to see, based on our own unique desires and needs.

So help you god if you say anything about Netflix’s suggestions.

To combat this cultural deprivation, we have enlisted our resident cinephile and discerning critic Clare Eriko to take questions from you, the humble viewer, and help match you up with a good flick.

Let them see what you can see.

I have a date with a girl this weekend. She's coming over to my house and we're going to cook dinner and watch a movie—like actually watch a movie. I haven't decided on the film yet. She's really into sports whereas I'm more into campy cult films. Do you know of anything that can meet us in the middle? Something in between A League of Their Own and Hell Comes To Frogtown?

First of all—congratulations on your date! Those are remarkably hard to come by. I’m also pleased that you’ve decided to “actually” watch a movie. I’ve heard that’s a cool thing to do with movies.

As for recommendations, my expert suggestion is a double feature: B​ASEketball and D​eath Race 2000.​ B​ASEketball ​is one of the few legitimately subversive cult sports films I can think of, plus it stars a very sleep-deprived Trey Parker and Matt Stone in 1998. Parker and Stone r​eportedly signed onto the project​ because they believed that South Park would be canceled after one season. No, instead they got to star in a film and produce a television show at the same time.

In spite of that, it’s a good date movie (especially if you’ve been drinking). Based on a hybrid sport that writer/director David Zucker (T​he Naked Gun, Airplane!)​ made up in his youth, it relies on a lot of crude and offensive sports humor. It really fails when it tries to provide legitimate satire, but when they just say “dude” at each other a lot it isn’t so bad. Parker and Stone didn’t write the thing anyway. Plus: Jenny McCarthy.

Afterwards, you should leave room for D​eath Race 2000,​ a really, really good Paul Bartel directed and Roger Corman produced '70s dystopian future racing film. David Carradine and Sylvester Stallone turn out some campy competitiveness, the design and music is brilliant, and it's way ahead of its time.

If you can’t find either of those, I’d recommend either T​alladega Nights: The Ballad of Ricky Bobby​ or H​ot Rod,​ which are two more mainstream comedies I can safely say get funnier nearly every time I watch them.