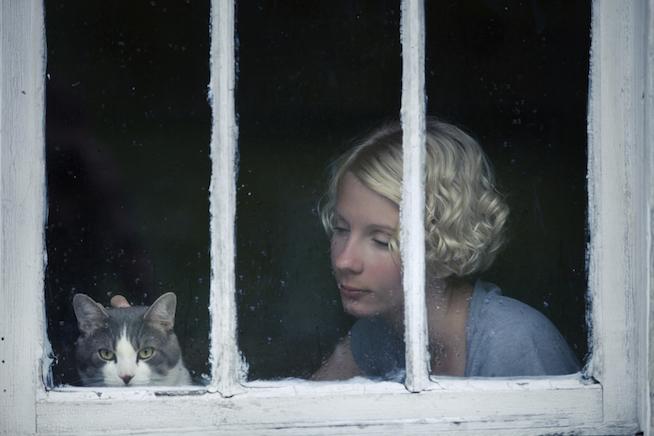 Having depression is a lot like having an asshole cat. He’s heavy and takes up space, lying on your chest at night, so you can’t get up. He’s always around, picking you apart with an air of disapproval and howling for you to feed him.

I’ve been in treatment, at different times, for mental health issues all my adult life. I’ve been medicated with different drugs in different combinations, and not medicated, all at the behest of well-intentioned doctors and psychiatric professionals. And I was hospitalized in 2013 for a week in the psych ward at the local medical center. My diagnosis shifts, as I imagine is common, and has run the gamut from ‘generalized anxiety’ to ‘mood disorder’ and ‘depression.’ The anxiety I experience most acutely is in panic attack form. This is the monster that jumps out of dark corners at me when I’m agitated or stressed. The mood disorder manifests in my inability (seemingly) to cope with, and properly express overwhelming feelings. And the depression, well, I named it Frank.

I once had a cat named Frank. This cat was a big, mean, asshole of a cat that I picked up as a dirty, abandoned kitten outside a diner in Indiana, brought home and tried to love. Frank didn’t respond to love though. As he grew from kitten to cat, all he wanted to do was lie around, destroy furniture, take up space, and eat. He ignored me mostly and just sat on the back of my couch, staring at me like I owed him money. Frank never did any of the cute things cats typically do — he only purred when I gave him food. One day he left and didn’t come back for two weeks. When he did, it was to die on my bed from a kidney infection he picked up out there on his adventures.

Having depression is a lot like having an asshole cat. He’s heavy and takes up space, lying on your chest at night so you can’t get up. He’s always around, picking you apart with an air of disapproval and howling for you to feed him. You try to pet him and he gets bored and jumps on top of the fridge, out of reach. He’s in that litter box all the time and you have to scoop out the shit or everything starts to smell. He’s the reason you don’t have nice things, scratching the couch and leaving hair all over your house. He’s not sorry, he’s just a cat that doesn’t really give a shit about you.

And you’re stuck with him because he’s your cat.

For the most part, I can live with depression. Anti-depressants don’t work for me, but anxiety meds would help. Talk therapy was hit or miss and I bounced from shrink to shrink, looking for someone to understand my existential dilemma and not try to talk me into the delusion that life held any objective meaning (talk about pet peeve). Staying busy, making art, and forcing myself to interact with people who loved me, made living with Frank bearable. So that’s what I managed to do.

A therapist once told me that by imagining my malaise as having shape, I could put it in a room, shut the door and walk away. But Frank just followed me around. And when I tried to close him in, he’d throw his body against the walls and tear at the curtains. I started to think that, really, my depression was pretty benign. People in the world have actual problems. I just have a bastard cat. That won’t kill me.

But managing depression is exhausting, which is also depressing. And I guess I hit my threshold for exhaustion/depression while going through the most unpleasant part of my divorce. The shame I felt was unbearable. I didn’t want to be around people, so I withdrew. Everything I wrote made me sad so I quit writing. I stopped eating so I could feed the cat. I stopped sleeping, because at night, my depression yowled at the windows. I stopped doing all the things a functioning adult does, and I laid down and felt so guilty about everything — my life circumstances; my depression winning — that I couldn’t will myself to get up.

I wish I could say that I kicked the cat the curb. And that I overcame my depression, and if you suffer, you can too. I went to the hospital, and there I saw other people, real people, with their own demons — some bigger, some smaller than mine. The staff re-acclimated me to being a human and I learned how to shower and eat again. I sat through workshops like Understanding Your Brain Chemistry and Meditation for Stress Reduction. And when I was released, the friendly nurses hugged me, wished me well, and told me to come back if it became unmanageable again.

What is it they say? The cat came back, he wouldn’t stay away.

And I guess that’s the takeaway from my whole experience in the hospital, at the lowest point of my depression. The real-life Frank was just a cat — a force of nature. He didn’t choose to be the way he was any more than I chose to be born with my particular brain chemistry. The anxiety and fear I experience, the aloneness, the meaninglessness I sense — a very large part of this is entirely beyond my control. But being guilty about my depression made it impossible to share with anyone how bad it had become.

I won’t live alone with a jerk cat anymore, but I’d be lying if I said he didn’t still come around, knocking over trash cans then padding silently down the alley, scratching at the doors and watching for an open window to slip through again.

If you like this article, please share it! Your clicks keep us alive!
Tags
living with depression
anxiety attacks
generalized anxiety disorder
Depression
managing depression