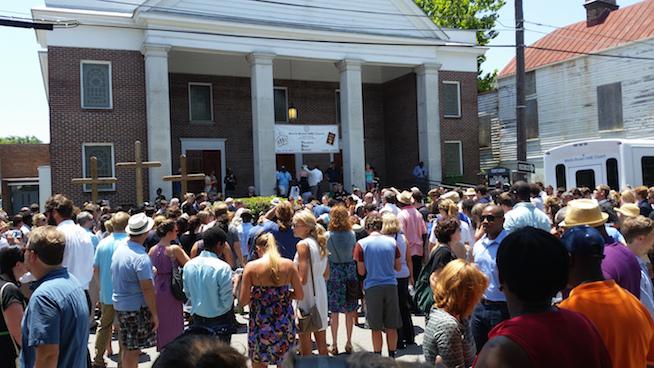 Race is a construct, but a real one. It’s not simply playing the “race card” to discuss a problem when the systemic effects are quantifiable, when on the balance some lives clearly matter more than others, when a shooter of a certain type is deemed “crazy” and not evil, when history calls to and echoes itself, circling us again and again.

I am not black, but I, too­, am tired. As a person of color in this country, from a background that may not scream Rockwell and apple pie, I am tired of explaining and trying to coherently lay out what it is to be the “other” to people who have not had the experience of having a background story, and destiny written for and about you — before you are ever met. And what it means to be a part of a group before you are recognized as a person. I am tired of trying to explain the experience of being constantly surveilled, yet barely heard or seen; of navigating a world in which your capacity and worth are too often judged by what you are presumed to be, and not necessarily what you are.

And yet, for so long, so many of us have done it. We try to explain in rational and dispassionate ways — lest we be deemed hysterical — our lived experience, seeking to validate what the remains of history left behind.

Understand that race, class, ethnicity and gender are “things.” They are complicated, interrelated experiences and systems that inform every aspect of how we live and are perceived. My husband will never understand, try as he might, my anxiety about walking alone in the dark, because he has never lived in a female body that is 5 feet tall and 130 lbs. Despite the fact that this is my body that I own and try my best to love, that doesn’t mean that, in the wrong place and wrong time, it can't be taken, owned, and claimed by another. My husband fears being mugged. I fear much worse. This is our small but significant parallel reality: one that cannot be met, but needs to be understood.

He is tall and blue eyed, and very “all-American.” I am always the “random” search when we travel together. It does not feel so random when it is always you.

My skin color and features are mutable and vague enough that I have been confused for Italian, Brazilian, and Moroccan. I have been alternately complimented on my “tan” and still denied entry to a train until I produced my “papers.” I have been taunted to “go home” when speaking Spanish, despite having been born an American citizen, and despite that my grandfather's blood earned this country a Purple Heart in a segregated Army unit. And yet there are worse situations out there; so much worse. I have never endured the historical weight of being an indigenous person, or been in the shoes of a black person who had to navigate space in a way I have never had to conceive of or gauge — for safety, survival, for peace.

I did not, for example, fear being shot when I set off the alarm to my house and greeted the police at night, in my suburban neighborhood. I am not a Dominican of Haitian ancestry (or just one that is ‘too dark’), currently being stripped of nationality and facing deportation to Haiti. I am not an African migrant drowning off the coast of Lampedusa, or a Syrian refugee — too brown, too Arab, too Muslim — to gain asylum anywhere. Whom we trust, whom we save, and whom we expel says so much about what we value.

I once got on a train in Madrid and an older woman tried to save me a spot so I wouldn’t have to sit next to the sudacas, like a good “Spanish girl.” Yet being Puerto Rican, I basically was one, much to her chagrin. Other times I have been called a spic to my face, or confused for Arab in France and called a salope (dirty whore). Race and class and colonialism are also international “things,” not just American sins.

But the festering, haunting specter of race, the will to erase the sins that constituted the very creation of this country, is ours. It is in our marrow. And so Charleston — in the wake of Baltimore, of Kalief Browder, of Ferguson; of protests, riots, lynching and desegregation and a Civil War — all of that is us. All of that is in the United States, today and not yesterday. . . but today and likely tomorrow.

The terrorist act that took place in Charleston, SC — and it was one, without a doubt — was not an anomaly in any sense. We have mass shootings in this country at what seems an incomprehensible rate. Yet the particular ideology of these murders is one of long-standing racial hatred and anxiety (“they are raping our women”), one that stinks of a reality we cannot wish away, one that keeps coming back to haunt us because it has never left, because what has not died cannot be buried.

Southern trees bear strange fruit. Blood on the leaves and blood on the root.

I am not Southern. I am not black. I cannot possibly feel the wound of Charleston the way some do and must. Even so, as a woman of color, I see. It is not productive when people declare they “don’t see race.”  This willed sameness is a false comfort, something folks get to say that when race doesn’t affect them, effectively negating its impact and legacy. Race is a construct, but a real one. It’s not simply playing the “race card” to discuss a problem when the systemic effects are quantifiable, when on the balance some lives clearly matter more than others, when a shooter of a certain type is deemed “crazy” and not evil, when history calls to and echoes itself, circling us again and again.

Whenever "mass shooting" comes on the news I am embarrassed and horrified to say I take a second or two to turn around and watch, because it's now so normative, a unique brand of American sickness. I tune it out; we tune it out. This latest one in Charleston, in a place of sanctuary, hits at the long-standing wounds we keep picking at, along the ways in which the injustices and the dirtiness of history refuse to be made invisible or smoothed over. It's here, all here, raw and broken. This is who we are...now what?

What Is Success? Why I Choose Relationships Over My Career
Lara N. Dotson-Renta, PhD