Kick Higher, Yell Louder: Teaching My Girl To Own Her Voice 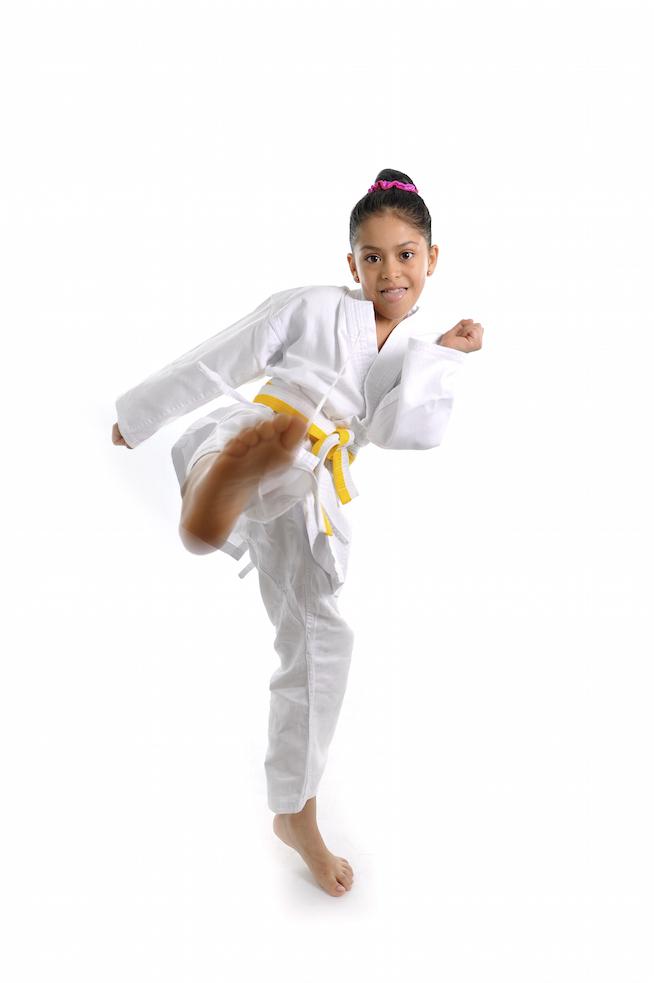 I realized that it was in fleeting moments like these, girls learn to silence themselves, to accept being interrupted, to deflect attention from their accomplishments. It is in tiny increments that little girls become women who hesitate to speak.

At six years old and roughly 40 pounds, my daughter has long been the smallest and youngest in her Tae Kwon Do class. Despite this, she has also always been the loudest, proudly counting out the warm-ups in Korean at the top of her lungs and bellowing a firm, high pitched “kia!” with each kick of her little body. I have always watched her in amazement, so imbued is she with a vitality and confidence I lacked at that age.

Yet on this day, my daughter glanced around furtively during her routine, less focused than usual. I waved her over and asked if everything was okay. “I’m okay, mama. It’s just that I’m the loudest in the class, and sometimes some of the boys look at me funny, and laugh. They don’t like it when I’m louder than them. So I’m being quiet.”

My heart dropped a bit, and I struggled with what to say. Tae Kwon Do class had always been a safe space for her; a place where her confidence thrived and the teachers encouraged her to reach her full potential. She beamed when she sparred, and counted out the stripes on her belts with glee. Yet here she was, just six years old, the only girl in the day’s class, quieting herself to appease a handful of boys during warm-ups. A kindergartener, she had already deduced that a “good girl” was quieter and that she might be accepted more if she demurred.

I realized that it was in fleeting moments like these, girls learn to silence themselves, to accept being interrupted, to deflect attention from their accomplishments. It is in tiny increments that little girls become women who hesitate to speak. I couldn’t simply let it go.

I took a deep breath and said, “Hey sweetie, listen. There will always be people who want you to be quiet, and who don’t want to listen to what you have to say even if it’s important to you. Talk anyway when you know it’s right. Don’t be afraid of the sound of your own voice.”

Seemingly assuaged, she gave me a broad smile and ran back to class, kicking a loud “kia!” with each swift turn. Yet I saw her waver, sometimes yelling, sometimes holding back, measuring the volume of her voice, and the distance between her exclamations, and the boys in question, negotiating in her head, when her voice was too big or just big enough.

Grown women do this all too often — we measure ourselves constantly, trying to calculate whether we are taking up too much space, or are too much of this, or too little of that. Voice draws the contours of our space. It helps us assert ourselves, articulate who we are, defining our limits and ideas. We so often teach girls to moderate themselves and defer in a way we do not do with boys, to ‘play nice’ even at a cost to themselves. We underestimate how much kids notice and internalize, how much they reproduce what they see.

I made silly gestures whenever my girl looked at me during the rest of the class, encouraging her to kick harder, move faster, aim higher, yell louder. I could see her across the room giggling and regaining her confidence, slowly putting aside her misgivings and focusing on her exercises. It was a bittersweet victory, for girlhood is fraught with moments when she will be told she should be smaller or more discreet, that she should remake herself in someone else’s image of her.

But on this day at least, I was there to tell my six year old daughter that she need not be quieted, that she can and should revel in what she loves, no matter who thinks she should or shouldn’t. I hope she remembers this, as she grows older, bigger, faster, and wiser. I hope she remembers me whispering in her ear when I am not there, asking her to trust herself, to never mute the sound of her own voice.

If you like this article, please share it! Your clicks keep us alive!
Tags
Tae Kwon Do
teaching girls to find their voice
motherhood
tae kwon do kids
girls taking tae kwon do

What Is Success? Why I Choose Relationships Over My Career
Lara N. Dotson-Renta, PhD