My Own Private Cuckoo's Nest 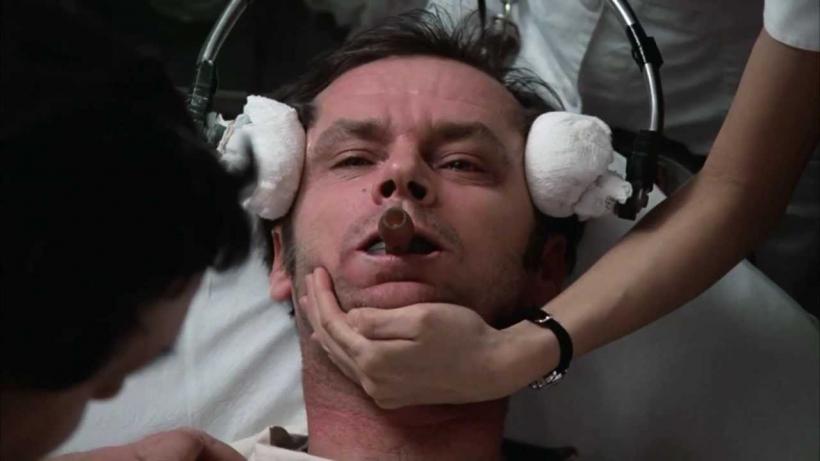 Jack Nicholson in One Flew Over The Cuckoo's Nest (credit: youtube screen grab)

A psychiatric stay never fails to be one of the most humbling, isolating, humiliating experiences a person could endure

I recently had the opportunity to watch One Flew Over The Cuckoo’s Nest for the second time. I haven’t seen in it in the years post bipolar diagnosis, for I watched it nearly a decade ago in the early days of courtship with my husband. The first time was a viewing to check the film off a bucket list of must-see classic films, sitting back and being thoroughly entertained.

This time I had some trepidation about watching it. I recognized in advance it had the potential to be triggering given that I now have numerous psychiatric hospitalizations under my belt. As the opening credits began, my husband whispers to me, “Try to watch it from the point of view that Nurse Ratched is not the enemy.” Interesting thought. Nurse Ratched is not the enemy. Okay.

Try as I might, I still disagree with him. I walked away from that film with one key thought: she remains forever the antagonist of the story. After the path my life has taken in the last several years, I am incapable of seeing the film from anything other than the perspective of a patient. I spent my viewing time recalling repeatedly one particularly difficult hospital stay in which the staff, in my mind, saw this film as required viewing during their unit orientation.

I recalled being left without water for hours at a time (sometimes whole days) with no access to a water fountain beyond the bathroom sink. This was while prescribed Lithium where a stable state of well-being depends upon one’s daily water intake. I recalled being told to sit tight in the day room all day and behave in lieu of walking peacefully to get some exercise and stretch my legs. I recalled fighting with staff over all-encompassing body wash products that were making my hair fall out. It was an argument to be allowed to wear a ponytail. Nurses would ignore patients for days at a time, materializing only when voices were raised or medications were due. If we checked in with staff at all, it was the tech that was assigned as our one-to-one companion while on suicide precautions. Once those were lifted, you might exchange a hello with staff during mealtimes or groups as long as you were behaving and staying under the radar. Nothing more, nothing less, lest we interrupt a nurse protected behind the glass of the nurses’ station and risk being scolded for needing feminine hygiene products or more toothpaste.

Nurse Ratched exercises her power in subtle, cruel ways to remind the patients of their lack of control, loss of dignity, and their surroundings at every opportunity. She fundamentally sought to suppress a sense of community that the patients might develop in their shared experience. I saw that in my staff. My brain may have betrayed me, requiring a higher level of care than was safe for me at home, but that didn’t mean that I was less than human. That didn’t mean my needs should be ignored. If I ask a question about my care, my medications, my nutrition, my exercise, please don’t put it off and tell me you’ll come talk to me later when you never intend to.

A psychiatric stay never fails to be one of the most humbling, isolating, humiliating experiences a person could endure. All one hopes for is a shred of humanity within to survive, as did the characters of Ken Kesey’s novel-turned-film. They banded together in the most unlikely of ways to remind the staff that they are human; they have needs and most importantly that somewhere in the recesses of their mind the person they are still exists.

If you like this article, please share it! Your clicks keep us alive!
Tags
bipolar
mental health
one flew over the cuckoo's nest