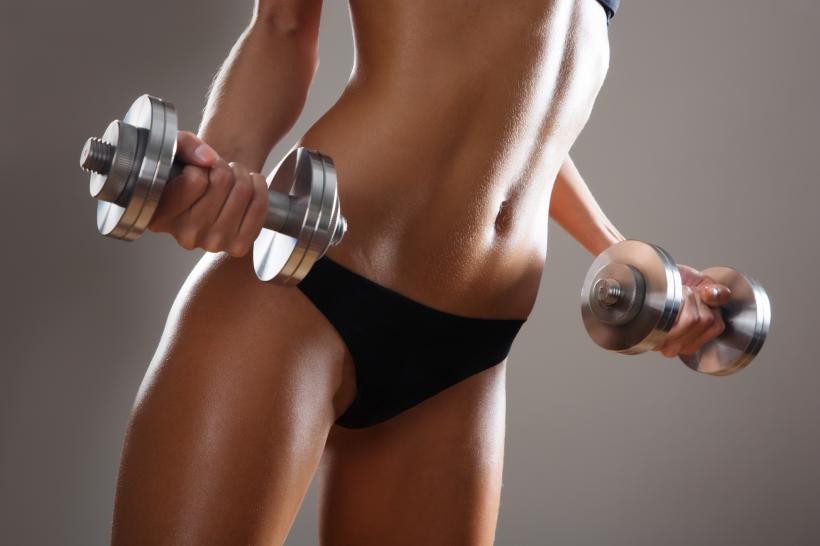 News flash: Not everyone wants to look like this.

Fitspo reeks of another impossible standard for women to live up to and then feel shit about when they can’t emulate it. Even though it’s not promoting extreme thinness as a goal, it is still peddling an unrealistic body shape that approximately 4% of the population can achieve.

If you’re a human being living in 2015 you’ll have come into contact with some sort of #fitspo. It dominates Instagram feeds, is used in mainstream advertising, and is probably the screen-saver of every fifth woman you know.

For some people it’s a get-your-butt-off-the-couch source of inspiration, making them more active and healthy — both positive things.

But for others, it’s a dangerous, all-pervasive force: a movement that triggers obsessive behaviour and another impossible body standard for women to compare themselves to, and ultimately, fall short of.

It’s everywhere. It’s growing. And it has the potential to screw up the body image of a whole generation of women.

“Even when women report that they find these images motivating (and many women say that they do), they often acknowledge that the comparisons with their own bodies leave them feeling worse about themselves and their appearance,” says clinical psychologist Olivia Patrick.

Fitspo, short for fitspiration, is hugely visual: it promotes toned, taught, FIT bodies in stylish workout gear. The fitspo uniform is small Nike bike shorts and a colourful crop. And a tan and a six-pack: Exhibit A.

Its core purpose is to motivate people to diet, exercise, and lose weight by flooding them with what they could look like (see above). It encourages people to share their own weight-loss success stories, all in the name of encouraging others to replicate them.

And then there’s the #soblessed motivational quotes that dictate the lives of Fitspo followers:

“Habit builds routine.” (Meaning: workout every day or you will fall off the wagon and feel shit about yourself.)

“Sore is the new sexy.” (Meaning: workout until you are so exhausted your muscles ache for days.)

“Your body hears everything your mind thinks.” (Meaning: DON’T let that negative thought enter your mind, lazy bones. Keeeeeep running, even if your brain is asking you to stop.)

All of this is done under the guise of “health.” But I am calling bullshit.

Fitspo reeks of another impossible standard for women to live up to and then feel shit about when they can’t emulate it. Even though it’s not promoting extreme thinness as a goal, it is still peddling an unrealistic body shape that approximately 4% of the population can achieve.

Everyone’s body is different, and health (which is what we should all be concerning ourselves with) looks different for everyone, and is not always directly proportionate to one’s exterior.

It’s much easier to buy into Fitspo. Thinspo, a movement that promotes super skinny frames, worships jutting bones and concave bellies, which is instantly off-putting for many. In comparison the Fitspo movement is built on honed and healthy figures, and millions of women around the world have shown that they want this, they want to be this.

For some, fitspo is extremely triggering, particularly those with a shaky relationship with food, or a tendency to get obsessive about exercise.

Various studies have found that the Internet and online communities can foster and exacerbate eating disorders when they encourage and promote pathological behaviours. Fitspo falls right into this basket:

– Exercise at any cost.

– Don’t make excuses (they stand between you and a thigh gap).

None of this screams moderate or sensible. And I have seen my own friends succumb to the intoxicating power of Fitspo. They talk about how empowered they feel by the movement, how it helps them get out of bed at 5.30am every morning and how it truly makes them want to change their own bodies.

And all of this is OK until it morphs into: “I hate how I look, I have only lost 10kg, I want to drop 15.” “I can’t come to dinner, I have to train in the morning.” “I was so fat and gross, look at this fugly pic of me from three months ago.”

The shaming of your own body is not, and will never be, cool in my book and this is central to Fitspo: the before and after picture.

Constantly comparing themselves to “perfect” Fitspo images has caused some women to hate their own bodies, and this is deeply disturbing. There is enough speculation about women’s bodies without us doing it to ourselves, on Instagram, for the world to see.

“I’m all for people feeling body confident and working out to be healthy and strong. But I think it’s something we should be doing for ourselves, not for the approval of others. The only person who really needs to ‘like’ or heart or thumbs up MY body is ME,” says Harriet Farkash, editor of young women’s website Flamingo Pink. “I’ve unsubscribed. I don’t want to compare my beginning to someone else’s end.”

We need to stop holding ourselves up to them, we need to unsubscribe and we need to set our own realistic goals and expectations. Only then can we be healthy and happy, free from the pressure of always comparing ourselves to someone else’s standard.

Eating clean isn't about health anymore. It's about shame.

How to REALLY love working out. No, really.

If you like this article, please share it! Your clicks keep us alive!
Tags
fitspo
thinspo
fitness
health

"Never, Ever Do This To Your Face, People. It's Not Worth It."
Kate Spies