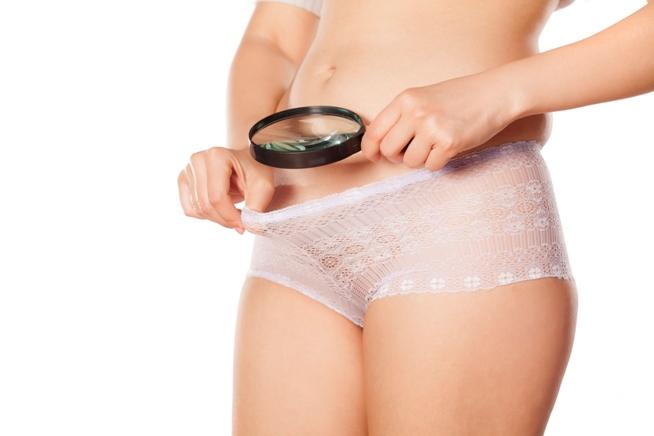 What's going on down there?

Let’s just put it out there: vaginal discharge is a bit of a sticky subject.

Awful puns aside, while most adult women experience discharge, we rarely want to hear, read, or talk about it. The word alone is enough to make people squirm.

Today we’re going there, because it’s important for women to be able to look at their undies and know what’s healthy and what requires medical attention. As with almost anything, the appearance and volume of discharge can vary greatly from one woman to the next, but here’s a general guide.

According to Dr Dasha Fielder of Sapphire Family Medical Practice in Bondi Junction, it’s common to experience a little more discharge than usual around the middle of your cycle (days 12-16) when you’re ovulating. “A ‘normal’ discharge should not have an unpleasant odour, and it should generally look like a clear mucus,” she explains.

For some women, it might be slightly ‘milkier’ in colour. Particularly if you’re not using the pill, you might also find this secretion has a stretchy or stringy consistency, which isn’t a cause for concern — Dr Fielder says this is a sign of ovulation and will usually last just a few days.

If you’re using a form of hormonal contraception, you generally shouldn’t notice any major variation in your discharge throughout your cycle.

Some women naturally have a yellowish tinge to their discharge, which might be perfectly normal for them. However, if yours is usually clear and changes colour and takes on a noticeably thicker consistency, Dr Fielder says it could signal a health issue.

Dr Fielder adds that as vaginas are not sterile environments, it’s perfectly normal to have organisms down there. “When it becomes problematic is when that particular bacteria or fungus multiplies many, many times and starts causing us symptoms,” she says.

There are a number of possible causes for spotting between your periods — it could signal pregnancy, your body’s adjustment to a new contraceptive pill, or an underlying health condition. Regardless, it’s worth having a chat to your doctor.

“I always say, if you see any blood coming from any parts of your body and it’s not associated with menstruation you should check it out,” Dr Fielder says.

Watery, frothy discharge that’s either grey or white in colour and has a distinct or ‘fishy’ odour is a common sign of bacterial vaginosis. However, around half of women with this condition won’t experience any symptoms at all.

It can be disconcerting to find dark brown marks in your undies, but it’s not necessarily a bad sign. “You’ve got to be careful that you’re not confusing it with the end or beginning of your period. Usually a dark discharge means old blood,” Dr Fielder says.

However, it’s definitely uncommon to experience this throughout the rest of your cycle.

“A particularly important test would be to make sure you have a pap smear that’s up to date, because usually blood would be coming up the cervix and we’d want to check that it’s healthy,” Dr Fielder explains.

Apologies in advance for the graphic, potentially appetite-destroying description, but if your discharge begins to resemble cottage cheese you might have a candida infection (i.e. thrush). “This is the most common one we see. It’s not so much the discharge that troubles [patients] but the itch that they complain about,” Dr Fielder says.

If this is the case, it’s important you have a doctor diagnose the infection before you commence treatment. Dr Fielder says some women who go straight to the pharmacy are given over-the-counter creams that aren’t quite right for what they’re experiencing.

Dr Fielder says it’s worth having a chat to your GP if you notice any change in the colour, volume, consistency, or smell of your discharge. Often a simple swab test with be sufficient, and what you might not realise is that you can administer this yourself.

“Basically, a self-collection swab is as simple as putting in a tampon and removing it, except you have a little swab. Then we can send it to the lab and analyse it,” she says.

However, in some cases an internal examination might be necessary.

6 Things You Should Never Do To Your Vagina

"We Saw A Sex Therapist. And I Wasn't Ready For It. At All."

MORE FROM The Glow Team