In The Case Of Rape: Hillary Clinton Was Asked If We Should Believe Bill’s Accusers 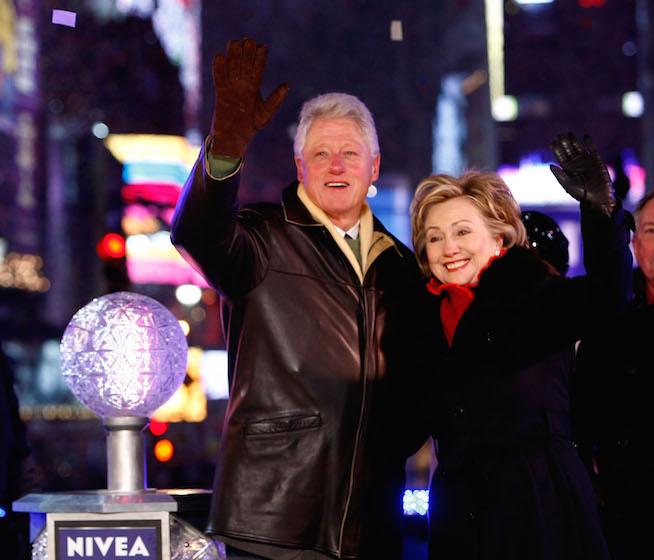 Bill Clinton has a long list of sexual assault accusations dating back to his days as a Rhodes scholar at Oxford.

Hillary Clinton wants you to “believe women” — as long as they’re not the ones who accused her husband of assaulting them.

The Democratic presidential candidate has vocalized her support for rape victims, tweeting in November: “Every survivor of sexual assault deserves to be heard, believed, and supported.” During a campaign stop in New Hampshire last week, where Clinton is competing in the primary with Senator Bernie Sanders (I-Vt.), a female supporter asked her if she believes Bill Clinton’s accusers: “Would you say that about Juanita Broaddrick, Kathleen Willey, and/or Paula Jones?” Clinton quickly brushed the inquiry aside, “Well, I would say that everybody should be believed at first until they are disbelieved based on evidence.”

Of course, these three women aren’t the only ones to accuse Clinton of assault: Bill Clinton has a long list of sexual assault accusations dating back to his days as a Rhodes scholar at Oxford. However, what makes her answer on the subject so disappointing isn’t just the severity or scope of the accusations against her husband but that she fails to comprehend just how much the system of justice is stacked against women like Paula Jones and Kathleen Wiley. Hillary Clinton wants us to stand with women, but American law enforcement is designed to prevent them from ever being believed.

The issue with a statute of limitations for rape cases is that it takes victims years to make sense of what happened to them — if they report the incident at all. Statistics from the Rape, Abuse and Incest National Network show that 68% of sexual assaults will never be brought to the attention of authorities, and a report from the Telegraph newspaper in the UK shows why: 2/3 of women cited “low conviction rates” as barriers to reporting. According to RAINN, just 2% of rapists will ever face jail time for their crimes, despite the fact that the rate of false rape claims is very, very low. Of that 32%, that means a lot of women will never get justice.

The reasons behind that aren’t just to do with states’ statutes of limitations. “Evidence of rape, such as DNA or bruises, is very time sensitive, and once it's gone, it's gone,” Bustle’s Lauren Holter explains. “Because rape cases often become hearsay battles in court, it can be more difficult to prosecute years after the fact than other crimes.” Thus, believing victims based on “evidence” itself is a tricky situation when many of the women who report their sexual assault are likely to wait until they no longer have physical evidence to prove their case. In the case of many of Bill Cosby’s accusers, many of whom didn’t come forward for decades, all they had was the power of their shared stories.

While the Cosby cases were notable for their stark consistencies, the accounts of survivors are well-known to be fuzzy and inaccurate. This is not the fault of rape survivors but a psychological response to trauma. A 1996 study from the Journal of Abnormal Psychology showed that sexual assault victims are actually less likely to remember what happened with clarity, as researchers found their accounts to be “less clear and vivid, less visually detailed, less likely to occur in a meaningful order, less well-remembered, less talked about, and less frequently recalled either voluntarily or involuntarily.”

Facing memory loss, many victims attempt to narrativize their experiences by connecting the dots with inaccurate details that don’t reflect the reality of what happened. These realities were at the heart of questions around Rolling Stone’s University of Virginia rape story, in which an undergraduate — referred to as “Jackie” — accused members of a campus fraternity of gang-raping her. Outlets like the Washington Post questioned the inconsistencies in Jackie’s story, which led to the magazine apologizing and retracting the story altogether. But as the Guardian’s Jessica Valenti reminded us, that doesn’t mean she was lying: “It’s much more likely for a rape victim to lie about the details of her attack than for a woman to fabricate a sexual assault whole cloth.”

Of course, there are women who lie about being raped, but there are many more who are unfairly discredited and dismissed. Earlier this year, Timothy Long, the chief of police in Charlottesville, Virginia, reminded reporters that we’ll never know what happened to the student at the center of the Rolling Stone story, but a lack of proof doesn’t “mean that something terrible didn’t happen to Jackie in 2012.” I would remind Hillary Clinton of the same: Just because her husband has never been prosecuted doesn’t mean we shouldn’t believe the women who accused him — after all, the former president agreed to an out-of-court settlement with Paula Jones to make her sexual harassment suit go away.

If you like this article, please share it! Your clicks keep us alive!
Tags
Hillary Clinton
Bill Clinton
bill clinton sexual assault
Rape