Friend Request Me!: Are Your Digital Friends Your Real Friends? 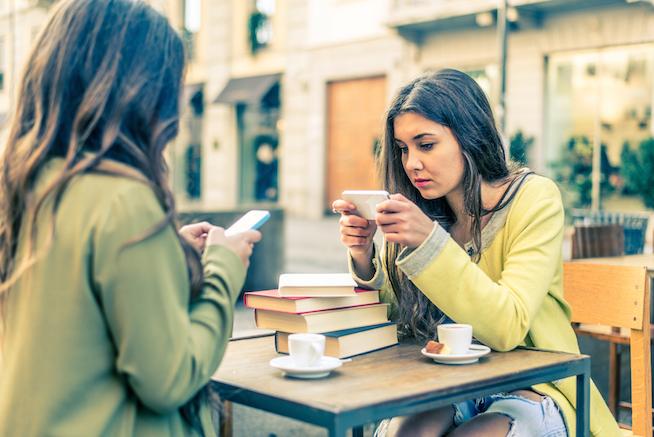 Or some friends you get together with only to stare at your phones...

Some friends are the kinds of people you would go to jail for, while others are merely casual drinking buddies, or office mates you occasionally text outside of work.

According to a recent report from Oxford professor and researcher Robin Dunbar, Facebook users can only rely on a small group of their digital acquaintances in times of crisis. He estimates that just four friends would help you out in a time of need.

If this is strangely reminiscent of the Seinfeld episode where Jerry declines Ramon’s offer of friendship because he already has three friends (“I really can't handle any more”), these studies are taken as a sign that online intimacy is illusory. If Facebook is already overriden with bots, it suggests your friend list is little more than digital spam.

While I agree that platforms like Facebook, at their worst, can serve as a replacement for human contact, technology isn’t solely the one-way mirror its critics suggest. In 2014, my best friend and I moved to separate sides of the country — respectively relocating from Chicago to Los Angeles and New York. In a previous era, we would have agreed to write when time (and the slovenly postal service) permitted or to call once a week. We would have slowly grown out of touch. When I said goodbye to him at LAX that July — leaving behind the person I was closest to in the world — part of me was gravely certain it would be the last time I saw him. The moment had the melancholy grace of a season finale for a show that quietly doesn’t get picked up for another season.

But of course, I was being melodramatic. We talk just as much as ever before — through text, tweets, emails, phone calls, and when I accidentally FaceTime him without realizing it. These technologies, whether personal devices or public platforms, are merely changing the boundaries of what friendships are by supplementing our IRL relationships. In a New Republic essay from 2015, Kyle Chayka suggested it was the end of “digital dualism,” the idea that we have discrete selves on the Internet and offline, but perhaps it’s a sign that those connections have always been more complex than a simple dichotomy.

In a truly great 2014 essay for the New York Times, Pamela Paul argues that the word “friend” has changed in its modern context — a trickle-down effect from its loose usage on Facebook. If being someone’s friend might have had a connotation of a deep, passionate connection when most Americans simply knew fewer people (how many acquaintances could you really have before the invention of the phone or a car?), the word has come to mean “person I know online.” You can meet someone at a party once, have a nice conversation with them, and become their friend for the next two decades, as if by accident. You might not even remember who they are.

But what this idea neglects is that humans have always had different kinds of acquaintances who serve different purposes. Some friends are the kinds of people you would go to jail for, while others are merely casual drinking buddies, or office mates you occasionally text outside of work. You are friendly with all of these people. You really do like them. You enjoy their company — or seeing an unexpected message from them on your phone. It might feel abrasive — practically Seinfeldian — to insist that your tenuous bond with these people isn’t friendship, even if you know you couldn’t rely on all of them for a kidney. Having online friends that don’t quite fit the definition is the way humans have always interacted: with a kind of avoidant politeness.

The Internet may enable this behavior (isn’t it difficult to cut people out of your life these days?), but Robin Dunbar himself has long suggested that humans have a maximum capacity for intimacy. His theory of the “Dunbar number” argues that our brains are only so complex and can only maintain a certain number of relationships. Dunbar estimates “150,” but even that figure sounds a little exhausting. Absolutely no one has time for that many close friends. Instead, the Atlantic’s Jacoba Urist instructs us to think of the Dunbar number as your “holiday-card list,” a phenomenon your great-grandmother would have been very familiar with. How many of the people she sent seasonal greetings to did she really keep up with the rest of the year? How many did she want to keep up with?

While this might suggest that Facebook is simply the newest version of keeping up appearances (and to an extent, it is), it’s also allowed us to become more discerning. In 1968, J.C.R. Licklider and Robert Taylor predicted that “life will be happier for the on-line individual, because those with whom one interacts most strongly will be selected more by commonality of interests and goals than by accidents of proximity.” As The New Inquiry’s Adrian Chen adds, these men felt that the rise of the Internet — an age where everyone is connected — would lead to “truer bonds than real world relationships determined by arbitrary variables of proximity and social class.”

That’s a utopian view, but it’s not entirely inaccurate. In a 2015 profile on teen social media use for the International Business Times, Julia Glum found that technology was eroding what we think of as traditional “cliques”— teen friend groups based on shared socio-economic status. Instead, modern teenagers have replaced them with “tribes,” associations based on a shared love of Call of Duty or One Direction. Even if one millennial reminds Glum that “you're never going to go to dinner” with most of the people you meet on Tumblr, there’s a reason that many teens “prefer to make friends online,” rather than in person. The Internet can help us envision those a truer self.

Sometimes those relationships stick more than the ones you made in real life. Of all the friends I made in high school, the one I still keep in contact with most frequently I only met in person a few years ago: Minnie went to high school at a small suburb outside of Philadelphia, and we became friends through our Xanga pages. Because I didn’t have to see Minnie every day in the halls at school or the lunchroom, I often felt I could be more honest with her — confessing things I couldn’t tell my closest friends. When I was fifteen and struggling with my sexuality, Minnie was one of the first people I came out to. There’s a reason we remained friends over a decade later: In some ways, she was the first friend who knew the real me.

The state of friendship has changed significantly since the days of MySpace and LiveJournal, but in some ways, forming social groups is the same as it’s always been — as blurry and tentative as the boundaries of our own selves. Facebook isn’t telling us anything we didn’t already know: Deciding who your real friends are is difficult. But if executed correctly, social media won’t drive us further apart — like fish viewing each other while submerged in digital isolation tanks. It will bring the friendships that always mattered into clearer focus.