The Only Thing That Cures Morning Sickness Is Having The Baby 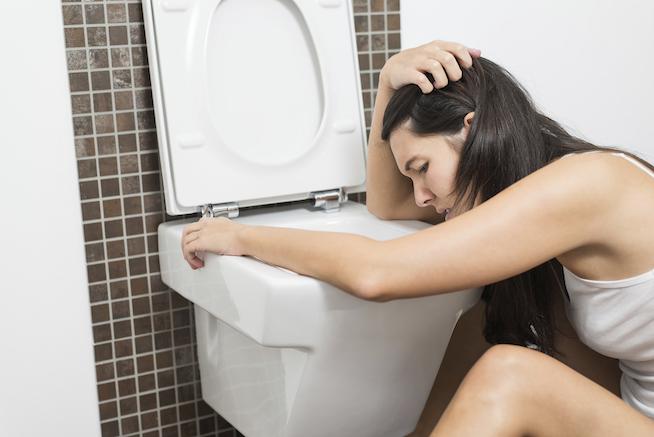 If someone had told me standing on my head would alleviate morning sickness, I would have done it.

I found out I was pregnant because my husband told me I was.

My period was two weeks late, but that didn't alarm me because I've never been on a regular 28-day cycle. And, while we were trying to get pregnant, we weren't trying all that hard — I wasn't tracking my cycle and it was our first month of having unprotected sex and seeing what happened. So I didn't think much of it when my period didn't show right away.

After the positive test and the cautious excitement of We're having a baby! came what felt like a literal gut punch — intense, chronic, debilitating morning sickness. I'd wake up and be OK until it was time to get out of bed and try to make it to work. As soon as I was vertical, the nausea would kick in and I'd run to the bathroom. For the next hour, I'd vomit, then dry heave so loudly my husband could hear me from upstairs when there was nothing left to throw up. More days than not, I'd have to call in late or call out of work completely because I couldn't leave the house. I vacillated between mild nausea and violent dry heaving over the course of the day.

Some mornings, I'd get off the train at a stop that wasn't mine so I could vomit into a trash can, then get back on the next train. I'm sure everyone thought I was just wildly hungover. In fact, as an alcoholic in recovery, I found this pregnancy symptom to be incredibly triggering. Throwing up every morning reminded me of the years of my life I spent battling hangovers, and it made it hard for me to remain optimistic. I found myself depressed and withdrawn.

This all culminated with a trip to the emergency room for fluids because I was just so thirsty — which, of course, is how I used to handle my very worst hangovers, too. Having the IV put in for dehydration was the icing on the terrible, horrible, no good, very bad cake that was the first trimester of my pregnancy. While I didn't quite meet the criteria for hyperemesis gravidarum (the extreme morning sickness Duchess Kate struggled with), it was bad enough that I was prescribed Zofran, an anti-nausea medication.

Unfortunately, my insurance would only cover six pills per week, which meant I could get relief for a few hours, but still spent the majority of my week feeling like I was stuck on the open sea — in fact, I even tried seasickness bands to help my nausea. I also tried ginger tea, crackers, ginger candy, bubbly water, mints, and everything else people suggested. If someone had told me standing on my head would alleviate morning sickness, I would have done it. SPOILER ALERT: Nothing helped.

Throughout my first trimester, I held out hope that it would get better at 12 weeks, like everyone promised it would. I ended up having to tell my coworkers about my pregnancy much earlier than planned because I was concerned that my chronic absences and constant vomiting in the staff restroom would lead them to think I had relapsed.

When week 12 rolled around, I was cautiously optimistic. I kept waiting for the nausea to subside and the vomiting to stop, but it didn't. It kept right on going. All I could think about was how badly I wanted to be pregnant and how miserable I was. I couldn't imagine having to go through that experience with an unwanted pregnancy. In this way, my pregnancy only served to make me even more passionate about access to abortion than I already had been.

Perhaps the hardest part was dealing with other people's commentary. I had tried everything I could to deal with my morning sickness (or, in my case, all day, everyday sickness), and to have well-meaning friends and acquaintances try to make me feel better. People reassured me that I'd get through it, pointing out how strong I was. But I knew the vomiting wasn't going to kill me, and that didn't make going through it any easier. Some people tried to make me grateful because so many people want to be pregnant who can't be, which, no. Someone else's fertility struggle does not invalidate my experience of illness.

About seven months into my pregnancy, I finally stopped throwing up all day (though that was replaced by the most painful indigestion I've ever experienced, and the vomiting returned when I went into labor). Throughout it all, the only thing I really wanted someone to say to me was, "I'm sorry you're going through this. It's OK to not love every second of your pregnancy. Being that sick sounds really hard."

Yes, it passed. Yes, I'd do it all over again if it meant having my amazing daughter in my life. But yes, it also sucked. And those realities can coexist. As I sit here in my first trimester of my second pregnancy, dealing with the pervasive nausea all over again, wondering why the hell I thought it would be a good idea to do this again, I just keep reminding myself of that.

This will pass, it will be worth it, and it also sucks a whole lot.

If you like this article, please share it! Your clicks keep us alive!
Tags
pregnancy
morning sickness
sea-bands