Fat Shaming Has No Place On The Baseball Field 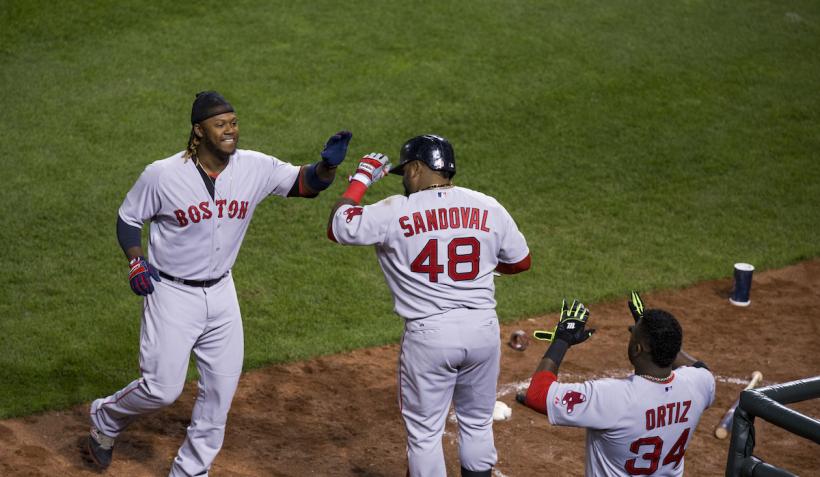 When men and boys watch the sports media fat-shame professional athletes, how must that make them feel about their own bodies? Image: Keith Allison

Sports culture's toxic masculinity has real-life impact not only on the athletes that play, but the young fans who are watching from home.

For baseball fans — particularly fans of the Boston Red Sox — there are plenty of reasons to criticize Pablo Sandoval.

After receiving a hefty 5-year, $95 million contract to play for the Red Sox, he had the worst season of his career to-date. His poor performance, both in the field and in the batter’s box, are deserving of criticism.

And while his outing last season is indeed getting plenty of critique, there’s something else that fans and sports columnists alike are harping on as well: his weight.

Sandoval is a husky guy — he always has been. He shatters the stereotype of what it means to “look like an athlete.” He is proof that it is possible to be in shape, play a sport at a professional level, and not have the kind of body we’ve come to associate with professional athletes.

He has demonstrated throughout his career that agility, reflexes, and the ability to hit a baseball have nothing to do with weight or pants size.

And yet, now that his performance is faltering, his weight has become an all-too-easy target for the sports media. It’s convenient for them to equate his poor on-field performance with his weight, even though it hasn’t changed much over the course of his career. Of course, if he was performing well, no one would say “boo.” (Take, for example, his teammate, David Ortiz — despite being another player with a larger build, no one attacks him for his weight because he generally does what he is paid to do on the field.)

Boston.com recently published an incredibly offensive hit-piece (major content warning if you’re clicking the link) mocking Sandoval and making fat jokes, complete with accompanying photos that showed Sandoval’s stomach hanging over the top of his pants as he threw a baseball. It was lazy and offensive at best, but dangerous at worst.

Because not only is this kind of rhetoric spreading misconceptions of what it means to be — and look like — an athlete, young boys and men who are reading this coverage and listening to these podcasts are absorbing these messages.

Boys and men are already overlooked when it comes to body acceptance, body positivity, and body image. While women do not fare much better when it comes to the messages we receive about our bodies, at least there is a discussion around mainstream beauty standards and how they’re harmful to us.

But men and boys are often left out of the conversation altogether. And when those same men and boys watch the sports media fat-shame professional athletes, how must that make them feel about their own bodies? How must that skew the perception of what bodies that look like theirs are capable of doing?

While women athletes deal with body-shaming on a much larger scale (hi, Serena Williams), the truth of the matter is, the way we talk about athletes’ bodies matters — even when those athletes are male. Fatphobia is pervasive in our society; no one is immune.

Sandoval is not the only baseball player having to answer question about his weight. Texas Rangers player Prince Fielder, an athlete who doesn’t look like “an Under Armour mannequin,” was celebrated on the cover of ESPN Magazine’s 2014 Body Issue. “Just because you're big doesn't mean you can't be an athlete,” he said. “And just because you work out doesn't mean you're going to have a 12-pack.”

A year later, he found himself fielding offensive questions from journalists about his weight and dodging comparisons to Sandoval.

His response was perfect, and one that the sports media and fans should take to heart: “I don't give a s#!t what I weigh.”

All this talk about what players weigh is a distraction from the real issues at hand, and has no bearing on their performance as athletes, or their health. Fatphobia is not just an issue that affects women — its effects on men are just as harmful. Sports culture's toxic masculinity has real-life impact not only on the athletes that play, but the young fans who are watching from home.

If we want athletes to be role models for young kids, we need to actually treat them like role models — and that means being mindful of the way we talk about their bodies.

It’s the job of the sports media to criticize the performance of a player, sure; but that criticism should stop when it comes to what they weigh. It’s not adding to the discussion, and it’s not doing anyone any favors.

Bash them for their sluggish bat, lament their lead glove, but leave their bodies out of it.