It's The Casual Homophobia That Hurts My Family Most 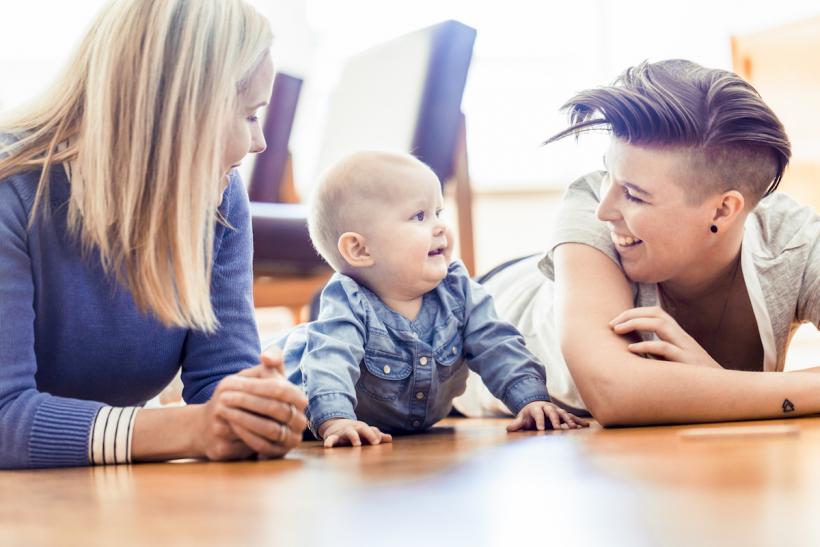 When subtle homophobia meets the three of us out in public, it looks back and forth from face to face and eventually just asks, “So, whose kid?” Image: Thinkstock.

That other, subtler form of homophobia — it is the worst, at least in my life.

It’s probably happened to most parents at one time or another: Something happens with your kid that just isn’t normal, and you're forced to try to determine whether it’s an emergency or not.

Of course, these types of things tend to happen after regular office hours, so just calling the pediatrician is usually out of the question.

In our case, it was a Sunday morning.

That's when my wife ended up on the phone with an ER nurse, carefully trying to explain the contents of our young son’s diaper. We needed to determine if he needed to go to the ER that day, or if it would ultimately be a better idea for all of us to wait until Monday and call his regular doc.

All of the guides to baby poop on the Internet (yes, these are things that exist!) listed this particular type of poop as a “contact your child’s doctor immediately”-type situation, so it felt like a gray area for the emergency room.

However, while I nursed a fussy baby in the next room, my wife was having trouble even getting to the important stuff.

“I’m his mother, but not his birth mother.”

“Well, I’m married to his birth mom, but the adoption hasn’t gone through yet, but he’s my kid, I’m raising him.”

“Oh. So you’re his stepmother?”

I could only just barely hear her end of the conversation, but I could hear her voice getting shaky with frustration and worry.

Being made to explain and justify your relationship to your own child when said child possibly needs urgent medical attention is awful — but it’s the kind of thing that happens when your family looks different from what folks expect to see.

When people are outwardly homophobic, it’s a pain in the ass, but it also quickly lets us know to avoid them.

My wife and I are lucky. We mostly reside in a progressive “bubble” wherein most of the people we know would never dream of criticizing two gay people choosing to parent together. We get congratulated (“Well, good for you!”) and generally encouraged for creating our family the way that best works for us.

Living in a liberal city, surrounded by lefty friends, it is easy to forget that broader American culture is actually rather divided on whether or not we deserve to exist and be respected. When we do experience homophobia (and we do), it is jarring and unexpected.

However, despite what you might think, it isn’t the blatant and aggressive homophobia that I find the most hurtful.

Instead, it is the subtle and insidious homophobia, always carefully disguised with plausible deniability, that cuts the deepest. When people are outwardly homophobic, it’s a pain in the ass, but it also quickly lets us know to avoid them.

Despite our relative insulation from homophobia, my wife and I are not unaware of the situation. There are plenty of people in this country who don’t believe that we have the right to exist, to be married, or to raise a child together. The distant relatives who ignored our wedding invitations, who refuse to make eye contact with us when they do see us, and let us know pretty clearly where they stand in the “culture war.”

It hurts — it absolutely hurts — but it’s also a bit like they’re holding up a huge sign that says “I AM A JERK.”

We generally don’t try to share space with those people, and so, for the most part, we live our lives in relative peace. Like, we’re not going to go to Westboro Baptist Church, you know what I mean?

While I was pregnant, a story broke about a lesbian couple, who live in a suburb of the city we live in, whose child was denied care by a homophobic pediatrician. After agreeing to be their baby’s primary care physician, the doctor decided that she was not comfortable dealing with a gay family, and told them so.

People were outraged. And rightly so! Doctors are supposed to provide unbiased care and not let their personal opinions affect that. They are definitely not supposed to refuse to treat an infant because they decide they are grossed out by the parents’ “lifestyle.”

But when I put myself in that couple's shoes, I couldn’t help but think that it might have been much more harmful for her to continue to see them.

Because that other, subtler form of homophobia — it is the worst, at least in my life. I cannot avoid it, because I never know where it’s going to come from and it’s never loud enough for me to scream, How dare you talk to my family that way?! and storm off.

When we respond that the baby is both of ours, subtle homophobia raises its eyebrows just slightly and says, “Oh. That’s right. I forgot that’s allowed now. Gosh, you see everything these days, don’t you?”

Subtle homophobia is always asking who our kid’s dad is, and when we say that our kid jolly well doesn’t have a dad, subtle homophobia smirks at us and says, “Well, sure, but you know what I mean — who’s his biological father?”

Subtle homophobia is very, very, very concerned with which of us carried and gave birth to our son, and with finding out my wife's legal relationship to him.

It doesn’t ever admit that it wants to know these things so it can choose to address one of us as the parent and ignore the other — but that is always what is going on.

Subtle homophobia is “just curious” if we’ve ever thought about whether or not our son might need a “strong male role model,” assuming that, because there is no dude in our marriage, our son must not know any men.

Subtle homophobia had an aunt who was “like me” but she didn’t talk about it much. She just seemed “normal!”

When subtle homophobia meets the three of us out in public, it looks back and forth from face to face and eventually just asks, “So, whose kid?”

When we respond that the baby is both of ours, subtle homophobia raises its eyebrows just slightly and says, “Oh, that’s right. I forgot that’s allowed now. Gosh, you see everything these days, don’t you?”

And all that shit hurts.

It hurts my soul. It chips away at my tough exterior and makes me feel like maybe we should have just stayed home.

So we keep going out; we keep answering the questions bravely and honestly; we keep reminding people that my wife is just as much of a parent as I am.

If I had been the one on the phone with the ER nurse, I would have called her out as homophobic, and no doubt she would have denied it.

But if I had been the one on the phone, there would have been no problem, and that is precisely the issue.

After going around and around for what felt like ages about who my wife was, and why “the baby’s mother” couldn’t hop on the phone right that second, the nurse finally listened to the description of what was going on.

She said it was possible that it was nothing serious, but it was a big enough deal that he should be seen that day. She advised “the baby’s mother” to bring the baby in immediately to be checked out.

We borrowed a friend’s car. My wife packed the diaper bag. I drove us to the hospital. With our baby in his car seat in the back, we sat in the front seat, worrying together through the traffic.

The receptionist at the ER used to work in the same building as our kid’s pediatrician. They don’t see many queer families, so she remembered us instantly. She didn’t ask who the mom was; she didn’t flinch when I crossed out “father” on every form she gave me.

She just smiled at us and said that she hoped that our kid would be just fine.

Our kid was just fine, but I’m still shaken.