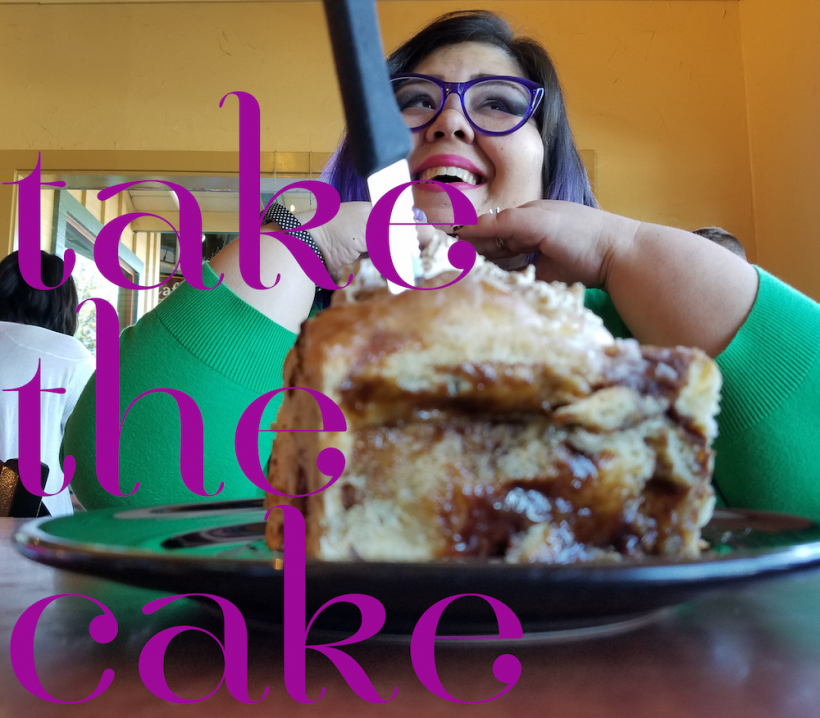 Fighting for fat rights isn’t just about fighting for access to clothing or the demand to be seen as beautiful. Image: Virgie Tovar.

We’re afraid of being patronized and dehumanized.

She and I met at the Curvy Girl Lingerie fashion show a few years ago — “I don’t mean to be a creeper but I know you from the Internet.” She later told me that her friend had to force her to say hi to me.

I was immediately hooked: She wore vintage frames, was dressed in technicolor, and had a caustic sense of humor with the kind of sideeye people get medals for.

I got the sense she was someone I could spill tea with, and that’s, like, 87 percent of what I’m looking for in a new acquaintance.

I hadn’t seen her in months, not since that time we went to this little bakery in San Jose. We ran into someone she totally hated from high school who awkwardly came over and hugged her, despite the semi-hostile awkwardness we were projecting outward, like hateful Care Bear stares.

“I’ve been dealing with a lot. I had a medical scare,” she says to me.

She tells me how she was exhausted all the time, unable to walk very far without feeling really, really shitty.

She figured it was just her weight, because, hey, that’s what all fat people are taught to think whenever we have symptoms of literally anything, from dizziness to pain to swelling.

We forego doctor visits because we know with near-total certitude that we are going to be told to lose weight.

Her medical situation escalated such that she decided to go see her doctor anyway. They called her back after running some tests and told her she needed to go to a hospital as quickly as possible.

It turns out she had anemia and didn’t know it. Her life was in danger; her red blood cell count was so low they had to perform an emergency blood transfusion.

When she told me she was looking forward to donating blood herself as soon as she was able, I almost cried.

On the cinnamon roll we were sharing.

I was reminded that fighting for fat rights isn’t just about fighting for access to clothing or the demand to be seen as beautiful.

When I was collecting essays for Hot & Heavy back in 2011, a woman named Abby sent me a piece she’d written about her experience with being misdiagnosed.

She’d gone into the doctor with severe and sporadic periods — she was out shopping, looked down, and saw she was leaving behind a trail of blood.

We are already always seen as sick, so when symptoms begin to arise, we just see them as part of what it means to be fat.

She sensed something was really wrong, but when she went in for her appointment she was told by her (very thin) doctor that the trouble was that she was overweight, and that she could leave this whole thing behind her if she just set her mind to shedding some pounds. Four years later, the cancer that had already begun to grow back on that day of the appointment had spread.

A couple years after reading that essay, I was asked to speak at a nurses’ conference in Philly. In preparation, I asked fat people to submit narratives about medical experiences that had shaped their view of healthcare.

I expected to receive about 15 replies, but ended up combing through 60 stories that left me shaking with rage.

Abby wasn’t the only person whose cancer went undetected due to a medical professional’s fatphobic bias. There were people who’d had unnecessary surgeries, openly hostile doctors, and who’d been refused treatment because of their weight.

And the cycle starts all over again.

My friend is OK now, but after we parted ways and I went home, I started to think about medical fatphobia. How it isn’t just the moments when a doctor refuses to show empathy or provide proper care to a fat patient — it’s also all the moments when we as fat people choose not to seek the care we deserve because we’re intimidated.

I was reminded that fighting for fat rights isn’t just about fighting for access to clothing or the demand to be seen as beautiful.