The Summer I Got Fat: A Love Story 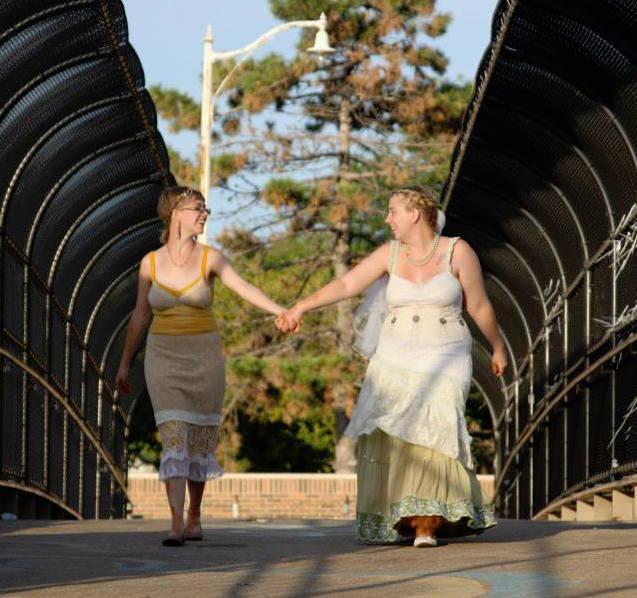 I’m fat in my wedding photos, and I also look damn good. Image: The Clovers.

How do you learn to love yourself all over again?

My wife and I got engaged in the winter of 2013, and pretty much immediately started planning a wedding for the next fall. (There’s a joke in there somewhere about how we moved somewhat quickly, but we actually went pretty slowly, for dykes!)

As winter faded into spring and spring faded into summer, despite the wedding planning stress, I had never been so happy in my entire life.

But something wasn’t quite right.

I first noticed it when one of my favorite shirts came out of the wash and just didn’t fit right. It wasn’t that I couldn’t get it on, it was just that it suddenly looked funny on my body. Flummoxed, I assumed it shrunk in the dryer (as I’ve never been exactly careful with my clothes) and gave it to my partner, who was just a little smaller than me.

You see where this is going.

I had always considered myself to be extremely body positive. I loved my body! I had several close friends who were fat activists, and I was working hard to be a good thin ally.

But despite all of that, I wasn’t ready for the changes that were happening in myself.

One day it clicked that there wasn’t actually anything wrong with our dryer — it was just that my body was changing. I found myself getting angry and sad and confused, and I decided to keep it a secret from my fat friends.

All of my already complicated feelings were further complicated by one thing: bride culture. We were totally engrossed in planning a wedding, and we were doing most of it ourselves, so that meant reading up on what to do, how to cut costs and where, and how weddings even work in the first place.

Almost everything in the known universe written about weddings is written for brides, and brides are assumed to be more or less the same:

Brides want their wedding day to be the most magical day of their lives.

And brides are all trying to lose weight.

I was a queer who was planning her wedding reception in a dirty anarchist collective, and I was getting fatter by the day.

Oh, and I was making my own wedding dress. By hand. Because there is something woefully wrong with me.

And because, you know, I guess I did want my wedding day to be extra-magical or something? Whatever?

Suddenly, all of the hours and hours I was putting into sewing while listening to Harry Potter audiobooks were punctuated by one thought: Oh my god what if the fucking dress doesn’t fit?

Bodies change shape and size all the time — this isn’t really news — but mine had been the same size for so long that I was in a tailspin. I carefully interrogated my eating habits and lifestyle.

It didn’t know it yet, but I was so plagued by internalized fatphobia that even though I knew plenty of healthy and active fatties, I was certain that I’d find something, a reason I was suddenly getting fat, a reason I could fix.

But there was nothing there, my diet and activity levels had remained the same (if not improved) over the last couple of years, and I actually felt healthier than I ever had.

Gaining weight showed me how much my self-love was actually reliant on positive feedback from society — and that shook me.

Anxious and filled with self-loathing, I told my fiancee I could never eat ice cream again.

In April, an acquaintance made a truly vicious fat joke, and I told her I didn’t appreciate her talking about people that I loved that way.

She countered that fat was inherently unhealthy, and there was nothing I could do to change her mind, and that therefore there was absolutely nothing wrong with her saying fat people should never have sex.

“Oh wow, are you going to eat that?” I heard from my office mates nearly every time I dared to eat anything.

The supposedly “alternative” wedding planning site I was using reminded brides that it was mean and unnecessary to shame brides who wanted to lose weight for their weddings.

By June, the acquaintance who made fat jokes stopped talking to me altogether.

When I saw her, she just glanced uncomfortably at my waistline.

Running was actual hell for me.

I have never liked running, but when I was thin, no one cared.

The fact that I disliked my runs was made even worse by my horrible allergies. My entire neighborhood was in full bloom: Snot ran down my face, phlegm clogged up my throat, and my lungs burned like fire until I literally could not breathe or see at all.

Eventually I gave up.

That summer was really beautiful, though. My partner moved into my tiny apartment, and endless packages of wedding supplies arrived in the mail.

I was building a life with the person I loved most in the entire world, a person who didn’t hesitate to accept my changing body.

We screenprinted our wedding invitations on a cold, concrete floor, staining all of our clothes with the ink. We went for long walks holding hands talking about the future. We took on way too many projects.

I sat in my bedroom and sewed for hours and hours.

And also, I got fat.

Everything in our culture had taught me that gaining weight was a form of failure. After changing my diet and exercise did nothing, I finally resolved to come to terms with my new body, whatever the body would be. It wasn’t easy, it isn’t easy to work against those kinds of cultural forces.

Then, one day, I weighed myself and calculated my BMI (which I hope we all know by now is bullshit, but I still wanted to know what mine was, for some reason). I found that I had just made the leap from “overweight” to “obese.”

Two days later, I read an article stating the obesity was now officially considered a disease.

I tried to joke it off, telling anyone who would listen that I was “not just regular fat, but sick fat!”

Inside, I was reeling with pain and confusion.

How do you learn to love yourself all over again?

I don’t have a real answer, except that it takes time.

Before I got fat, I imagined that I was the pinnacle of body positivity and self-love.

Gaining weight showed me how much my self-love was actually reliant on positive feedback from society — and that shook me.

I had to parse out all of my feelings about my body changing size and shape, and confront the complicated feelings I had around the loss of my thin privilege.

It had been easier to say that fat bodies were just as good as any other bodies when it wasn’t my body, when no one was giving me a dirty look just for daring to eat.

But summer wore on, and some days I was too busy planning my wedding to think about it much. As my new body stopped feeling like a stranger, it got easier, and finally, I told some of my fat friends about my secret attempts to become a runner.

They just nodded sadly; they knew the pressure I was feeling all too well, warning me, “It might be a fake it till you make it situation.”

I resolved to be kind to my body, even if I couldn’t love it again just yet.

The change in the way that I felt about myself happened slowly, it happened in spurts and fits, but it did happen.

We got married on a beautiful day in September, surrounded by family and friends and love. Our wedding day was everything that I wanted it to be, if a little stressful at moments. We had a cake topped with unicorns, we danced to The Clash.

I’m fat in my wedding photos, and I also look damn good.

I regret the time that I wasted worrying about my body changing, but I don’t regret that it changed.