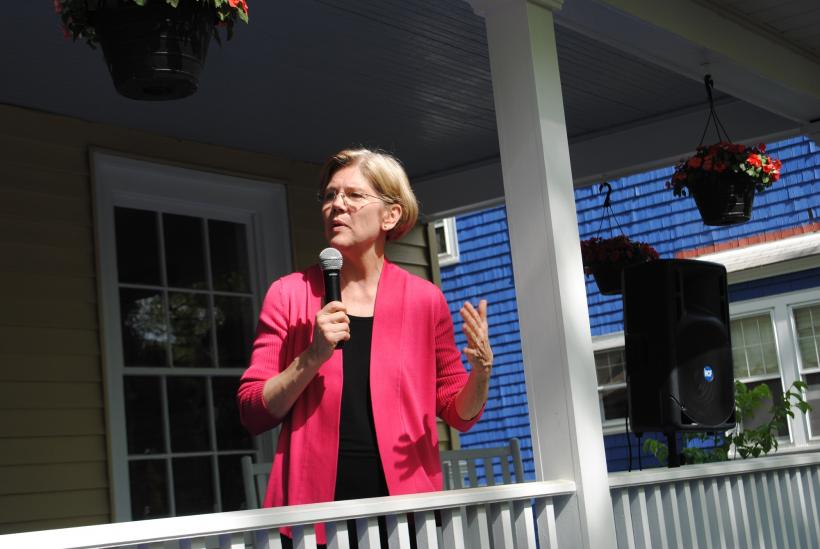 “All it can take is pissing off one billionaire on Wall Street to make it difficult.” Image: Edward Kimmel/Flickr.

Looks like some of Hillary's donors are playing hardball.

A new report by Politico’s Ben White reveals major donors to Hillary Clinton’s campaign may revoke their support of the candidate if she chooses Massachusetts Senator Elizabeth Warren as her running mate for the general election.

Several donors, interviewed under the condition of anonymity, told Politico that Clinton’s Wall Street base would “leave her” if she picks Warren. “They would literally just say, ‘We have no qualms with you moving left, we understand all the things you’ve had to do because of Bernie Sanders, but if you are going there with Warren, we just can’t trust you, you’ve killed it,’” one donor said.

Another Democratic donor with ties to the banking industry said Clinton will face a massive division in the government, and Wall Street donors need “a vice president who can negotiate for you on the Hill, someone like Joe Biden. And that is not a Warren strength.”

Sheila Krumholz, executive director of the Center for Responsive Politics, said the “volatile” state of politics means “all it can take is pissing off one billionaire on Wall Street to make it difficult.”

“And you don’t run national campaigns for as many years as Clinton has without some serious support from Wall Street, they are just too much of a heavy hitter,” Krumholz added.

Too true. According to the CRP, securities and investments industry has donated $28 million to Clinton’s 2016 election campaign. And tapping Warren, who’s one of the most aggressive Wall Street regulators on the Hill, would be a gamble for the presumptive Democratic nominee.

“It’s very clear that Wall Street guys don’t like her because she has been a lot more effective than most in communicating an anti-Wall Street message that has been part of the Democratic Party for 80 years, since the 1930s,” Wall Street historian Charles Geisst told White. “It’s not so much that Wall Street doesn’t like her personally, most of them don’t even know her, but they don’t like anyone that espouses that particular ideology.”

One Wall Street executive close to Clinton said choosing Warren would indicate Clinton is worried she can’t unite the party and pull Bernie Sanders supporters behind her. “Picking Warren would indicate weakness and panic for no reason and make them look like they are running scared of Trump,” the executive said. “There will be plenty of time to galvanize the left and get them to come out. And Warren would be a nightmare to try and manage.”

Still, Warren’s recent battles with Republican nominee Donald Trump prove the Massachusetts Senator is an effective attack dog for the Clinton campaign. “Elizabeth Warren very effectively called out Donald Trump for cheering the Wall Street collapse because it would make him money,” co-founder of the Progressive Change Campaign Committee Stephanie Taylor said. “And that moment reminded Democrats how powerful Warren’s megaphone can be.”