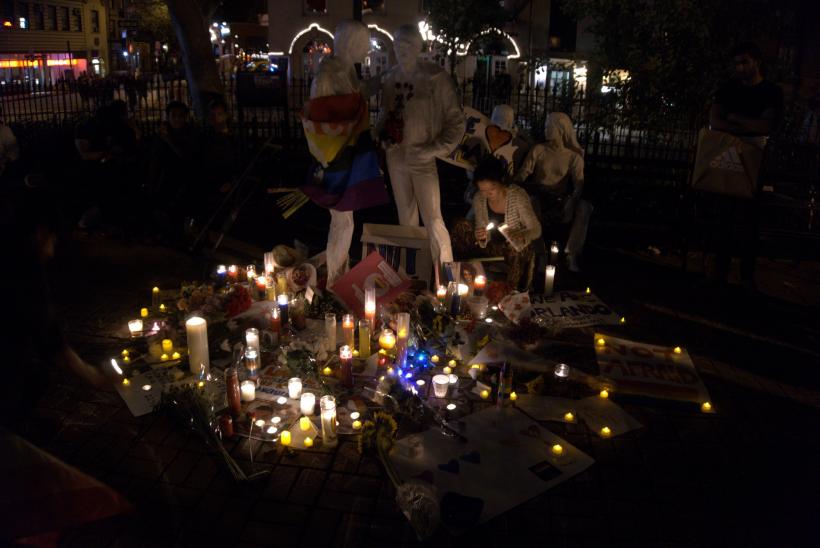 We need to take a closer look at ourselves as a country — because the scariest thing in this world is what we’re perpetuating here in our own homes.

As the airwaves get ripped apart by chatter, with us trying to determine whether to classify Omar Mateen’s brutal attack on gay nightclub Pulse Orlando, which left 50 dead and more than 50 injured, as an act of terrorism (which it was) or a hate crime (which it was) or both, it might be worth interjecting with another culprit that underscores both the terror and the hatred:

To look at the photos released of Mateen is to not be immediately stricken by his race or gender, but by his attitude, posture, build, and disposition. Broad-shouldered and cold of gaze, in one photo wearing the T-shirt of a major police department, it’s perhaps not a stretch to presume that toughness and belligerence were important parts of his self-image.

Mateen’s masculinity is of the excessive and toxic variety, yet masculinity in general, as we understand it, has tipped quite far in that direction, widely. The masculine impulse is geared toward results, willpower, and assertiveness at the wholesale level — which often translate into repercussions, force, and aggression at the retail level.

In other words, impulses which are sound and human at their root are routinely exaggerated and worshiped to the point where they become mad and depraved.

To worship all that is masculine often means to frame oneself in opposition to those in the LGBT community. The attitudes and values of that community do make room for the masculine, but predominantly veer toward the gentle, the soft, the empathetic, the sunny, the good-humored, the multicolored, and the spirited.

It’s that last one I’d like to look at closer. By “spirited,” I don’t just mean “upbeat.” I also mean “of the spirit.” Per the dictates of classic masculine culture, to refer to one’s spirit, or inner life, is one of many taboos. The masculine being does not look inward. Reflection, rumination, even big words or subtle displays of emotion — these are acts that “soft” people (i.e., feminine people) engage in.

Which is why artists so famously and eternally clash with athletes.

It wasn’t the gay men kissing that caused the bloodshed. The cause was a psyche that’s repelled by gentleness... A psyche that therefore feels justified to kill.

Which is why so many of the Mateen photos are selfies — the ultimate 21st-century gesture of trading one’s inward gaze for an outward one.

Which is why Mateen was known to show up at home and find some reason to beat his (now ex-) wife, for why turn one’s gaze inward when one can aim one’s fists outward?

Which is why, according to Mateen’s father, the sight of two gay men kissing in public threw the younger man into a rage.

Note, of course, that it wasn’t the gay men kissing that caused the bloodshed. The cause was a psyche that’s repelled by gentleness.

A psyche [whose] irritability is supported by many members of its prevailing culture, as a supposedly natural outgrowth of simply being a man. A psyche that therefore sees male humans and expects to see only coarseness. A psyche that therefore feels justified to kill, in the hope of restoring the coarseness it craves, yet creating a horrific and sickening excess of the same.

We see then why gay people are anathema to masculinity. In gay people, masculinity perceives its soft and vulnerable (i.e., human) underside, the side it wishes would just fuck off and shut its mouth — forever.

Sometimes, in pursuing its urgent ends, masculinity does indeed put on the cloak of religion (see: terrorism) or politics (see: hatred). But it’s still masculinity beneath the cloak.

Afraid to be anything less than mighty. Desperate for the world to observe that might.

And willing to kill to promote what it believes in.

Masculinity Is Killing Us
Eric Shapiro