Did Kaine Or Pence Win The #VPDebate? They Both Did. 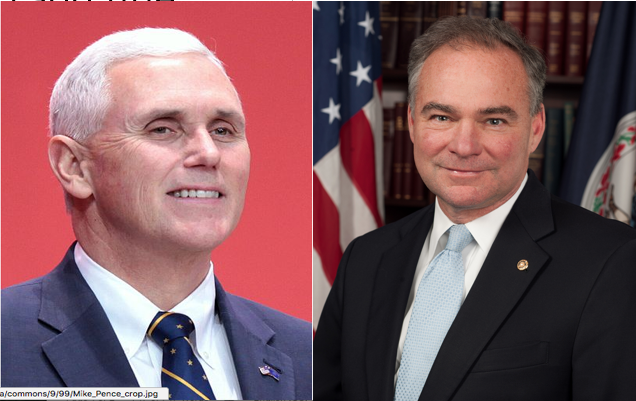 I have developed a love/hate relationship with this election’s never-ending stream of debates. They give me so much fodder to write about, and they are often, if not always, entertaining.

But they can drag (no more three hour+ events… ever, please). They can be an exercise in bewilderment (How did anyone vote for Trump after he clearly lost 10 out of 10 Republican primary debates?). Which leads me to the conclusion that, at least this year, they may be ultimately pointless.

But Tuesday night’s Vice Presidential debate between Tim Kaine and Mike Pence was one I definitely looked forward to watching. I’ve always kind of loved the VP debates. It was fascinating to watch kooky Joe Biden disrupt the usually-steady Paul Ryan in 2012, and the previous ’08 debate featuring Sarah Palin was one for the ages.

Palin brought the Canadian-adjacent accent, and as one of my college guy friends pointed out, an unusually sexy pair of calves. Biden, for all his star power (and he has loads) was actually upstaged.

Plus it gave us the gift of Tina Fey’s unparalleled impression of Palin, an SNL highlight for all time.

There’s something less pernicious about VP debates, probably because the stakes are lower. One feels that popcorn could be justified. Either candidate could fly off the rails, a bit, and it might be fun instead of scary.

VPs are freer to be fun and human.

Pence came out the winner, but narrowly, and it's important to remember: debate suavity is not the same as factual accuracy. Pity Pence's plight, but the man's tactic for "defending" Trump was to simply claim he'd never said or done all kinds of things Trump has definitely said and done.

This matchup was predicted a snoozefest. That’s due to the personalities of both Clinton running mate, Tim Kaine, and Trump secondhand, Mike Pence. They're calm, measured, older white guys, regularly described as "nice." In case you’re like most Americans and had never heard of these guys until right now, here’s a fun into:

Tim Kaine: He’s a senator from Virginia. Before that, he was also a one-term governor (also of VA), and later served as DNC chair (the same position recently resigned by Debbie Wasserman-Schulz).

The man’s got resume skills.

Other notable fact: He’s not a typical Democrat, in that Kaine is pro-life. That’s his personal view, as he argued at last night’s debate, and one he doesn’t believe should be forced on everyone. But it still may put him at odds with the strongly pro-choice wing of the Dem party.

Mike Pence: He’s the current governor of Indiana, and if you’ve heard of him before, it’s because Pence got national coverage during 2015 for signing a religious freedom bill that allowed businesses to opt out of servicing gay weddings. LGBTQ activists protested that the law was discrimination, and after enduring loads of political peer pressure, Pence signed an amendment disallowing discrimination against gay people.

The event blunted any chance of Pence running for the presidency himself, which had been on the table (Just what the Republican primary needed – one more candidate!).

Other notable fact: Pence was once a conservative talk radio host, but like the polar opposite of Rush Limbaugh. He was known to avoid conflict (Can you believe this?), and had a “quiet, calm” demeanor on air. This makes him, quite possible, a unicorn in human disguise.

So what happened at the debate? Alas, friends, I couldn’t watch it. Hurricane Matthew (boo) uprooted my family for the week, and thus I found myself on a plane during live debate hours.

What’s a girl stranded without Internet/TV access to do?

Pence came out the winner, but narrowly. Kaine began the debate too excited, too eager to get all his “lines” in, whereas Pence was present, go-with-the-flow guy. (Though if you see them in the split-screen, it is still SO EASY to imagine they are actually the same person.)

CNN had some facts from their group of “Undecideds” watching the debate. Kaine won it there, with 48% saying he “had a better understanding of the issues.” Maybe less helpful, Kaine also won (bigly) the question of “Who spent more time attacking their opponent?” A whopping 76% said the Democratic senator. Maybe not so good…

Blah-de-blah. Amirite? Here’s the most interesting thing I heard all night. CNN, in the aforementioned focus group of “Undecideds,” asked how many of them thought the Vice Presidential candidates were superior to the top of the ticket, in both parties.

And guess what? Every. Single. Person. All hands went up. That is great news for Tim Kaine and Mike Pence.

But. What does that say about our picks for POTUS? Er…

If you like this article, please share it! Your clicks keep us alive!
Tags
#VPDebate
mike pence
Tim Kaine
Politics
election 2016