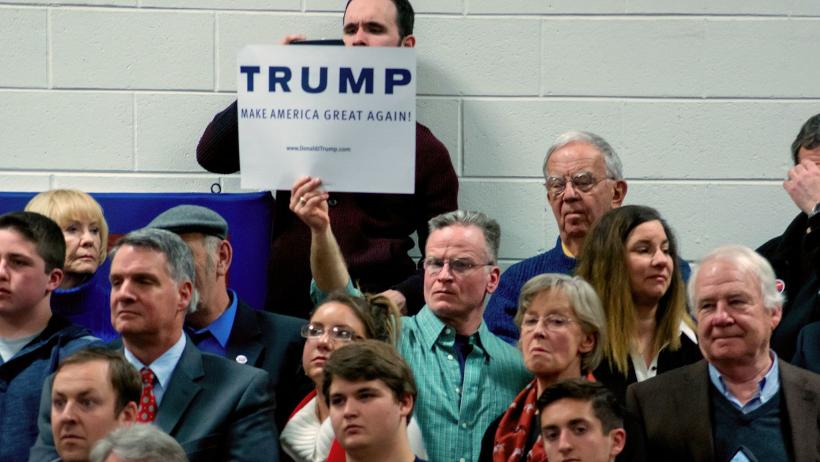 I found myself wondering just this, many times, throughout the past 596 days. Like most pundits, pollsters, political hands, and many regular ‘ol Americans, I thought of Donald Trump’s campaign as a joke. When he announced his candidacy, it was a spectacle befitting a reality star.

Here’s his bright red ball cap, his pre-fabricated “home made” signs, his scandalous smear that sparked the start of a million headlines. The avalanche of articles, news segments, tweets, posts, late night sketches revolving around “Trump.”

What do you say? I didn’t know. I wrote about it in ways that were humorous, quirky. I figured these were just bizarre states, and the vote was being split between the mind-boggling panoply of 17 candidate possibilities. Once it narrowed, I assumed.

Once it was just Trump v. ____. Rubio, or Kasich, or Cruz. They would beat him. People would see.

But then, they didn’t. Trump won Indiana, and that was the end of the Republican primary.

When I reflected on what Trump’s candidacy meant, I considered its impact on the GOP. That his willingness to allow racism and anti-Semitism, his meanness towards fellow candidates, his proud ignorance, his misogynistic past… that these were overlooked told me something dark and dangerous about where the Republican base had come.

Every person who voted for Trump decided to overlook much. They decided not to disqualify him for brags of sexual assault. They chose to ignore his allowances for racists and anti-Semites. They decided his admiration for the "toughness" of murderous dictators was not reason to turn away...

Let us stipulate that Hillary Clinton was not a perfect candidate.

Let us recognize that an FBI investigation is a reasonable reason to question someone.

Let us allow that many Americans have been struggling in the economy, which is to say, they have been hurt by rising bills, wondering about how they will be taking care of their families.

Every person who voted for Trump decided to overlook his meanness. They decided not to disqualify him for brags of sexual assault. They chose to ignore his allowances for racists and anti-Semites. They decided his admiration for the “toughness” of murderous dictators was not enough to turn away. They held his ignorance of policy as something to either brush aside or celebrate.

What do you say?

If you like this article, please share it! Your clicks keep us alive!
Tags
Election
coping with election
donald trump
Hillary Clinton