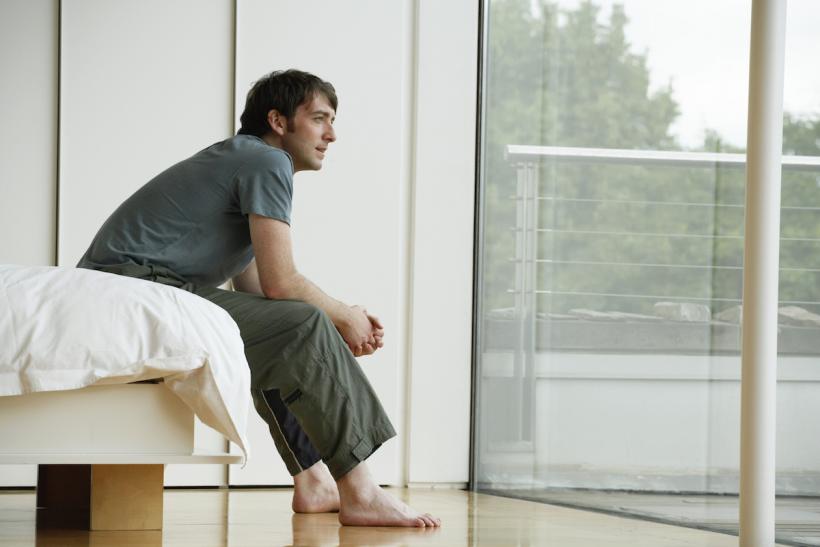 If something seems “off” about your breast, talk to your doctor. Don’t let fear keep you from treatment.

It is pretty rare. In my 18 years as a nuclear medicine technologist, I’ve only seen two cases, and I know technologists that have never seen any cases.

Even though men don’t develop breasts as secondary sex characteristics, the male breast structure is identical to the female’s, and that makes men susceptible to breast cancer. Risk factors for men are similar to those for women: age, estrogen exposure, and family history factor heavily into the equation. Additionally, radiation exposure, liver disease, testicle disease or surgery, obesity, and Klinefelter syndrome — a chromosomal disorder, which results in reduced testosterone production — also contribute to risk.

The good news is medicine has come a long way with respect to treatment strategies for breast cancer. Breast cancer is no longer the death sentence it once was; now there are a myriad of treatment options including surgery, chemotherapy, and radiation therapy or some or all of these in combination. Therapy can now be customized to the specific cancer by means of genomic testing to determine the type of cellular receptors on the cancer cells, which in turn determines which chemotherapies will, and will not, likely be effective. Genomic testing can also help determine if radiation therapy will be effective and your risk of recurrence.

Early diagnosis is key for successful treatment. It’s important to know this signs and symptoms of breast cancer:

Changes in the skin, such as scaling, puckering, redness, and dimpling
Changes to the nipple, such as inversion (turning inward), redness, or scaling
Discharge from the nipple
A painless lump, usually around the nipple area

If you have any of these symptoms, talk to your doctor. It can be difficult and embarrassing. You might feel foolish talking about your chest as breasts. I get that. But, believe me, your family and friends would prefer you feel silly to the possible alternative. One of the reasons men die at a disproportionate rate is that they don’t discuss it with their doctors until the cancer is advanced. Treatment is more complicated after it has metastasized (spread to other areas, which may include the lymph nodes or the bones).

To make a diagnosis, a complete physical exam and a thorough medical and family history is the first order of business. If breast cancer is suspected, your doctor will move on to some testing. You might have a mammogram, an ultrasound, a MRI, a biopsy, or even a PET scan. A mammogram is a type of x-ray that looks specifically at the breast tissue. To do this, the tissue has to be isolated from other parts of the chest, so it is pressed between two plates for imaging. It might be uncomfortable for a few seconds but is generally tolerable.

An ultrasound (or sonography) uses sound waves to create an image and works in much the same way as sonar location on submarines. Sound waves are transmitted and returned, and structures are determined by converting this data into a digital image. It is painless and there is no radiation exposure involved.

An MRI (or magnetic resonance imaging) uses a strong magnetic field and radio wave to create a map of the body. It is a long examination and some people are ineligible to have one due to metallic implants like aneurysm clips and some pacemakers which are responsive to magnetic fields.

There are several types of biopsies, but in general, a tissue sample is taken and sent to a pathology laboratory where a specialist examines in under a microscope. This test can not only determine the presence of breast cancer, but frequently the type as well. Depending on the type of biopsy, it may be done under general or local anesthesia.

A PET (positron emission tomography) scan is a nuclear medicine scan not common for diagnosis of breast cancer, though it can be used if other tests are inconclusive or contraindicated. It is commonly used to monitor response to treatment, however. A radioactive form of sugar is injected into a vein and images are taken of your body about an hour later. As the radiation exits the body it is detected by a ring of specially designed scintillation (light emitting) crystals. These flashes of light are collected and converted into a digital image by a computer program. Areas of increased metabolic activity, like cancer, will appear more intense on the images as more of the sugar is trapped there.

Great. Something else to worry about.

Again, breast cancer is not common in men. Still, you don’t want to miss it or ignore it. If something seems “off” about your breast, talk to your doctor. Don’t let fear keep you from treatment.

If you like this article, please share it! Your clicks keep us alive!
Tags
male breast cancer
health
Cancer
men's health