Take The Cake: What If Fat Women Stopped Settling? 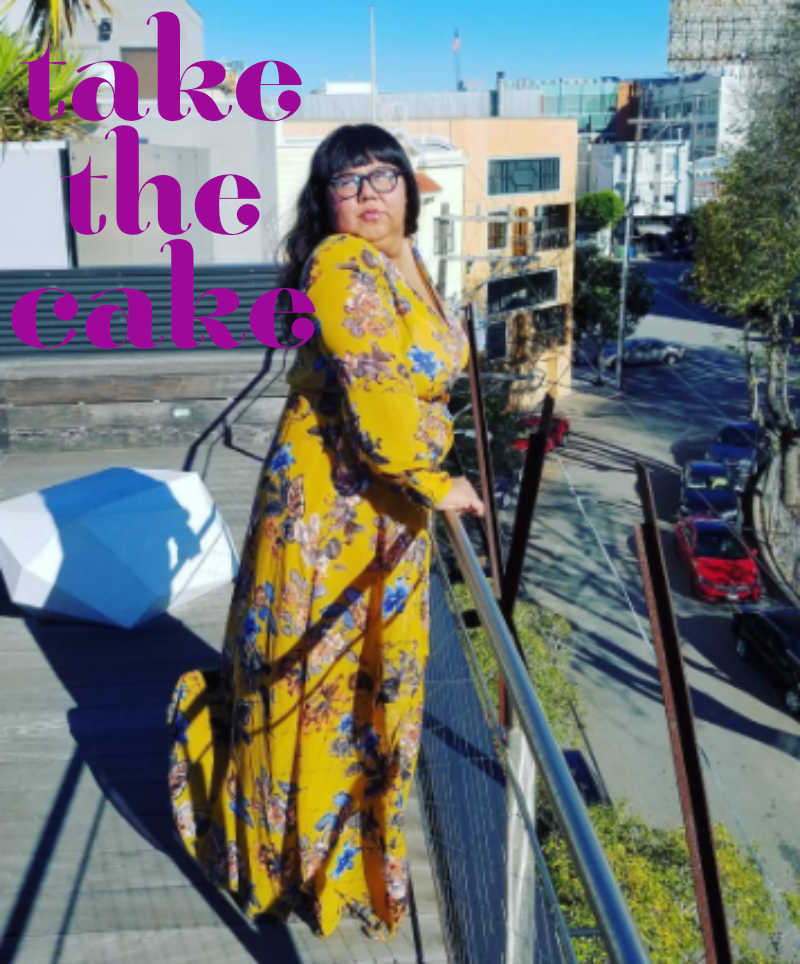 Settling: not the answer. (Image Credit: Virgie Tovar via Instagram)

My friends and I have been talking a lot about settling lately:

Settling for a cataclysmically draining and emotionally fraught Christmas with biological family, when all you want to do is watch a Bob’s Burgers and Texas Chainsaw Massacre marathon while sipping pinot from a box and eating enormous bowls of popcorn mixed with peanut butter M&Ms with your best friends.

Settling for romantic partnerships that don’t really amplify or excite us.

Settling for friendships that kinda suck.

Settling for a job we’re not really into.

I grew up being told (primarily by boys I went to school with) that I was undesirable and completely unlovable. The idea was that these boys, who were emotionally battering me every single day, could (with hard work and determination on my part in the form of extreme caloric restriction) someday love me and want to marry me. I was legit taught that the best I could do in life was to lose enough weight to give one of these mini-bigots a boner so he’d want to be with me. Um. Gross.

What about my love of spelling bees? What about my incredible ability to curate the most wonderfully distasteful outfit? What about all the funny, funny jokes I tell occasionally? I learned that none of that mattered. What mattered was that I follow the rules, accept that life wasn’t fair, and suck it up.

In my opinion, being a woman in this culture means being taught to get ready for a lifetime of unfairness, earning less, being considered the more expendable romantic partner, and dealing with a whole lot of uncompensated labor. Being a fat lady in a fatphobic culture means I have received a thorough education in the notion that I ought to be grateful for what I can get.

I learned settling from many women in my life, but the person who stands out most is my grandmother — the woman who raised me. Every day I watched her cry and threaten to run away from home. She was so phenomenally unhappy, and even though I know she loved me, I also got the distinct sense that this wasn’t the life she wanted.

Like me, she’d been taught that her happiness was not a priority, that emotional fulfillment doesn’t put food on the table, and that the best thing one can expect from love when you’re a fat girl is a man who is willing to be seen with you.

Watching her live life this way had a profound effect on me, and honestly the lessons she inadvertently taught me resonated once I began my life outside her home. I, too, was expected to live a life not particularly dissimilar from the one my grandmother lived. Yes, I absolutely had more access to things like education, professional ascension (in certain areas), and legal recourse should explicit gender discrimination take place. But when it came to the expectations we were allowed to have for our lives, I found that she and I weren’t so different. Our 40-year age gap wasn’t so big after all.

Living in San Francisco, paradoxically, leads to a lot of settling. As I’ve mentioned before, I love living in such a beautiful place, but I feel really disconnected from most of the people I meet here. The coffee is amazing, but the dating is terrible. You can get a gourmet grilled cheese sandwich (with gruyere and carmelized onions and some finely chopped endives!), but good luck getting an interview in the Financial District if you’re over a size eight.

It’s one of the most cutthroat places on the planet, and it’s easy to get caught up in creating a “narrative” of well-rounded success at the expense of pursuing actual honest-to-goodness joy. I hate watching the people I love (myself included) choose that narrative over themselves. Stories are fun, but I think a lot of fat women surrender the stuff that really matters, because we’ve been taught that we don’t have anything of value that needs nurturing or that deserves our utmost attention.

In short, I am no stranger to settling. In my opinion, being a woman in this culture means being taught to get ready for a lifetime of unfairness, earning less, being considered the more expendable romantic partner, and dealing with a whole lot of uncompensated labor. Being a fat lady in a fatphobic culture means I have received a thorough education in the notion that I ought to be grateful for what I can get.

Hey, fat babes, guess what? You’re fucken amazing. You don’t have to settle. Not now. Not ever. You are valuable. Your happiness matters. You matter. Fatphobia is some bigotry bullshit that ruins people’s lives. We need to work our asses off as a culture to get rid of it, not maintain it.

In the meantime, I think it’s important to make room for us to talk about the realities of our collective dissatisfaction. And I think it’s about damn time that we spent less time eating humble pie, and more time eating actual pie.

If you like this article, please share it! Your clicks keep us alive!
Tags
take the cake
Virgie Tovar
bob's burgers
Christmas
holidays
settling
dating
family