An Apology To Myself At 500 Pounds 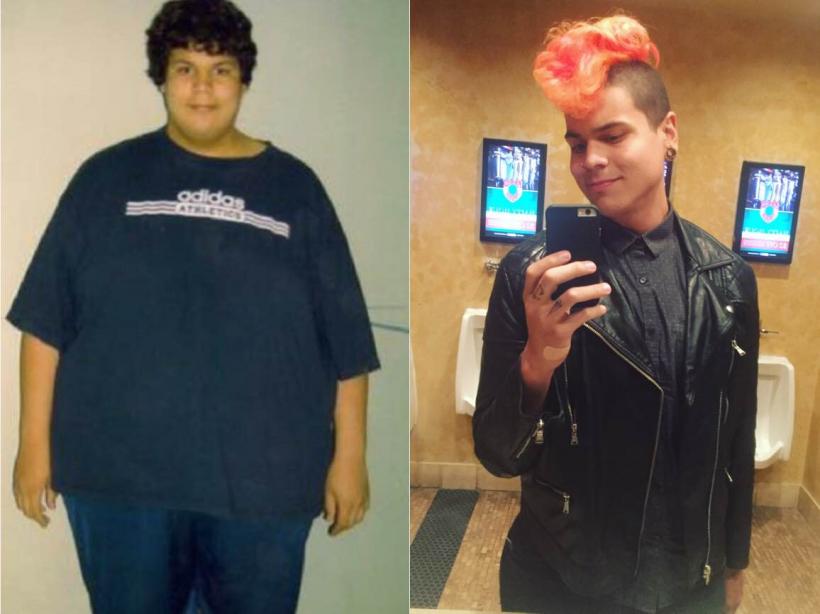 I'm sorry that I've allowed you to become an example.

I’m writing to you today because I feel it's overdue. For years now, I've talked about you to others as though I needed to vent my feelings about an old friend I'd recently had an argument with. I've written speeches and articles about you, like they were passive-aggressive Facebook statuses, and I was just too afraid to reach out.

I'm writing to you today because I owe you an apology.

In a sentiment I'm sure will surprise no one, I've learned that this life is a journey. However, over the course of that journey, we may find ourselves so far from where we started that we forget what home looked like. I worry my journey has taken me too far, and it's time I see my home again.

I'm sorry that I've allowed you to become an example.

I think a lot about a photo we took just before we started our weight loss journey back in June of 2009. This photo quickly became the “go-to” of any news outlet or website that wanted to show the 270 pound difference. When that picture was taken, I remember the anticipation that flooded our face. This was the first day of the rest of our life, and the last picture before we turned everything around.

That photo has since become an excuse to shock people. What was once the first day of the rest of our life has been relegated to a before picture, meant to elicit gasps and feelings of disbelief among those who see it.

I'm guilty of this, myself. Too often, I've used a before and after as a cheap opportunity to impress the cute girl at the bar so she'll make a comment about “how great you look now.” I hate that I've allowed you to become the unit of measurement through which people define my progress.

You are so much more than the “before” photo.

I'm sorry that I've allowed you to be spoken of so unkindly. Society really thinks it's fine to be cruel to fat people, doesn't it? Though I don't look like we used to, I promise it hasn't been lost on me. In fact, it's only gotten more clear over time. The tones of their voices have grown so much softer over the years. Their smiles are less forced, and when they look at me, it no longer feels like they're trying too hard to avoid looking at my body.

This is one of those situations where the absence of sound feels louder than the noise ever did.  No matter how much time passes, it never completely stops feeling like their kindness is a band-aid they've managed to stick over a wound they spent years opening.

In spite of all that, in knowing their love of us comes only because we've been cut down to a form that can fit through their cookie-cutter standards of beauty, it's still intoxicating. It's still so easy to let myself buy into it, because we're being given what we yearned for when we stuck out so much: acceptance.

I wanted there to be a clearly drawn line between us, because you embodied the list of problems I was still failing to outrun.

In doing so, I've allowed you to be spoken of so coldly. I've let people who never knew us define how I felt about you. I've let strangers talk about you as though you were a problem I overcame through hard work and perseverance, and not a human being going through a tough time, doing his best to get by in a world he didn't understand. I let doctors discuss you as though you were a disease I managed to find a treatment for, instead of a teenager struggling to figure out if he even wanted to be here anymore, let alone concern himself with what form he should be taking.

In this instance I am no more innocent than those around me, and in fact, I may be deserving of more blame.

For years I chuckled along nervously as people I didn't care enough to try and impress joked and hurled insults about how large I once was, instead of telling them to fuck themselves for trying to make a monster of a lost child. For too long I responded to the question of “how did you get so big” with some platitude about lack of motivation, instead of opening a discussion about the cycle of bullying, self hatred, and binge eating; nor did I ever once point out the irony that no one ever seemed to ask questions about how it happened, until after the weight loss, as though the origins of a difficult situation were not worth their time until they felt I was out of that situation.

I'm sorry that I've let them separate me from you.

I've never stopped noticing the specific choices of language others have used to define our change. I've been called a “completely different person.” I've watched as dozens, if not hundreds, have thrown around words like “transformation” and “metamorphosis,” as though the body I inhabit is completely foreign to the one you once lived in. They talk about us like there was a moment when I stopped being you and started becoming me, and for a long time I reveled in this.

I wanted there to be a clearly drawn line between us, because you embodied the list of problems I was still failing to outrun. We talk about you in the past tense like you're a troubled family friend we lost too soon: we miss you, but we know you're better as a memory than you were in the moment.

I'm ashamed that I let you be referred to as though my life didn't begin until you were already gone.

There are so many things I'm sorry for, but we've always felt the best apology is changed behavior, so I'm going to promise you this.

When someone talks about you as though you were a problem I managed to fix, I will remind them that we were never broken in the first place.

When someone makes a joke insulting our 500 pound, 16-year-old body, I will remind them that the troubled aspect of our life back then was our spirit and not our body, and during that time a kind word and a gentle smile would've done more than losing 270 pounds ever did.

When someone asks how we were so large, I'll tell them about our lonely heart and bruised skin, instead of what we ate for breakfast.

I promise you, 16-Year-Old, 500 Pound Matt, that when someone talks about our transformation, I will correct them. It was never a transformation, it was an evolution. I am not one being becoming another, I have always been one being, growing and changing as the world does.

I am a journey.

If you like this article, please share it! Your clicks keep us alive!
Tags
matt joseph diaz
weight loss
Before and After
body acceptance
body positivity