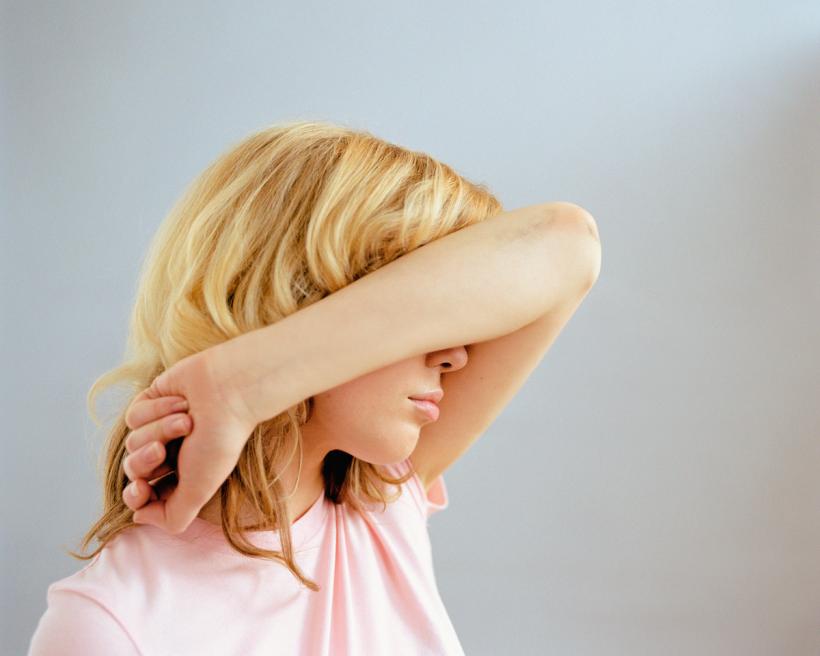 Slut-shaming is how we explain the gendered double standard of sexual respectability: It’s women taking flak for the sex we have, while men are applauded for simply “doing what men do.” Image: Thinkstock.

Anti-STI pushback is rarely about STIs at all.

Four years ago, I could be found most mornings at the same café with the same blue notebook and a mug of hot coffee.

I was trying to write the story of how I got herpes.

I tried for months. I’d start at the beginning and move through a sequence of events meant to lead to the here and now.

The details I included — sometimes more, sometimes less — changed by the day. Each version inevitably got scrapped and I’d rewind,  as if backtracking in a choose-your-own-adventure book. Not because I regretted the outcome, but because the story of the route I took to get there left me unsatisfied.

In composing a linear narrative ending with “...and then I got herpes,” I had essentially tasked myself with mapping out a formula for who gets a sexually transmitted infection and why.

I sought to identify culpability, consequence. If I could pinpoint when my “body count” went from reasonable to too large, where I had crossed the line between sexually liberated and reckless, then it would make sense.

Stigmas and taboos operate on the premises of an us-versus-them opposition, relying on the marginalization of the infected. It’s a defense mechanism that works particularly well with STDs.

In other words, I’d been duped into reiterating a socially-constructed script about herpes, filling it with personal specifics like a mad-lib.

The reason I couldn’t finish was that I fundamentally disagreed with its premise.

In the epilogue to the story of your dirty little secret, you cry. You think your life is over. But eventually, when you whisper that secret into someone’s ear, maybe, just maybe, they stick around. Fade to black.

Because maybe only some of those things are true — but also because it doesn’t really matter.

It doesn’t matter when: Irrespective of circumstances, I’m expected to be ashamed.

Think about it: STIs are associated with sex — I mean, it’s in the name — and sex in our culture comes with a whole lot of baggage.

Right, wrong. Should, should not. Good, bad… mostly bad.

I read a blog post once in which Margaret Polaneczky, OB-GYN, traces herpes stigma back to the pudendal nerve, a motor and sensory nerve responsible for sexual arousal and ejaculation. Its name, like the centuries-old term for external genitalia pudenda, derives from Latin, meaning “that of which one ought to be ashamed.”

This legacy of shame is charted on the body, is written into its vocabulary. And tellingly, pudenda is usually used in reference to the genitals of (cis) women.

The first time I was harassed because of herpes (a couple years ago), I was called a “cunt” and was accused of bragging about my STI. I didn’t know it was possible to brag about that, because boasting about something implies it is enviable. And if the world had taught me one thing about herpes, it was that nobody wants it.

Unaffected, I replied to the anonymous message and declared the defensiveness I had stirred up in this stranger to be a sign of success.

I was subsequently sent a death threat.

The last time I was harassed because of herpes (yesterday), a man told me I should be locked up and my clit scraped.

Such a violent act would do nothing to clear me of a virus that lives in the nervous system, but that’s beside the point.

I have been framed as so undesirable that I must be using my STI status to prove I’ve at least had sex — an “achievement.”

My ideas, like my body, are “dangerous,” and I am shamed in order to be silenced.

If herpes renders me tainted, and therefore unfuckable, and therefore stripped of my worth, then my confidence — misinterpreted as “flaunting” — is seen as an attempt to regain access to my worth through sexuality. Which is futile anyway, because, as Lindy West writes at Jezebel:

The sexualization of women is only appealing if it’s nonconsensual. Otherwise it’s “sluttiness,’” and sluttiness is agency and agency is threatening and so, therefore, sluttiness must equal disposability.

There is something uncomfortable about a woman who sets the terms of her own value. When I assert mine — regardless of STI status, regardless of others’ appraisal of my desirability — people who feel they have something to lose by my having power in this world will attack it from any angle possible.

While I have cited some of the most extreme opposition I face for being openly herpes-positive (it’s usually not so bad, I promise!) I’ve done so to illustrate that anti-STI pushback is rarely about STIs at all.

My ideas, like my body, are “dangerous,” and I am shamed in order to be silenced. Submissive.

Slut-shaming is how we explain the gendered double standard of sexual respectability: It’s women taking flak for the sex we have, while men are applauded for simply “doing what men do.”

It’s women being held responsible for the way men look at us, talk to us, and take from us. It’s women shouldering the blame for the shared consequences of sex.

The more “legitimate” one’s sexuality is considered, the more acceptable it is to get sick from it.

As a white cis woman with other intersecting but less visible identities, my womanhood is the channel through which my STI status is most commonly demonized.

Other people have written on the implications of infection for folks of different identities and experiences than mine, such as Mickey Valentine's deconstruction of STIs and cleanliness at Harlot Magazine: “​Acts and groups are regularly deemed unclean for the purposes of heteropatriarchy and white supremacy. As a Black person assigned female at birth and [...] perceived as a ‘woman,’ my body is deemed less ‘clean’ because of the hypersexualization put upon me by others.”​

And an article at HIV Plus Magazine notes how biphobia and lingering conceptions of HIV as the “gay man’s disease” also merge with the myth that bi men are the cause of infection in women. “Bisexuals are seen […] as unable to keep it zipped up,” Paul Nocera says. “Our supposed constant desire was what was getting us into trouble, and as proof, there was the imagined pathway, with the imagined spike in sex diseases.”

Gender, race, class, ability, size, sexual orientation — all of these (and more) ways in which we conform to or diverge from the default narratives of our society determine how transgressive our sexualities are. And the more “legitimate” one’s sexuality is considered, the more acceptable it is to get sick from it.

When we know the pain of boundaries violated, our space claimed as another’s, it’s painful to remember just how soft-bordered, how permeable we are.

So if STI stigma is a marginalizing force and targets most fiercely those in already-marginalized positions, why don’t we see more resistance to it?

Where are my feminist friends, my body-positive babes, and my sex-positive allies? Why are they silent when the stigma appears blatantly and aggressively, and why do some of these very people participate in its subtle perpetuation?

I think the answer begins with the simple truth that these movements are in progress — that we are all in progress.

The answer is also that conversations about STIs are typically relegated to the domain of health, not politics (as if one can be easily unsnarled from the other).

Slut-shaming seems irrational when it’s exposed as fearfully trying to control women’s bodies. But it seems rational, thus justifiable, when it’s believed to curb disease. (It doesn’t. If you need proof, check out this and this.)

Our bodies are inherently vulnerable. That’s a hard pill to swallow. And when we know the pain of boundaries violated, our space claimed as another’s, it’s painful to remember just how soft-bordered, how permeable we are.

So, “in the face of a virus that appears to infect at random… we fall back on moral sanctions in an attempt to recalibrate and restore order to our chaotic world,” Discover Magazine blogger Rebecca Kreston wrote in response to the World Health Organization’s latest report that at least two-thirds of the global population carries HSV-1 (which causes oral and genital herpes). “Stigmas and taboos operate on the premises of an us-versus-them opposition, relying on the marginalization of the infected. It’s a defense mechanism that works particularly well with STDs.”

I never really felt like herpes was something I deserved, but I did feel like saying so out loud was incriminating. Like that opinion in itself made me the type to get it.

I realize now that’s just a convenient way to make sense of an inconvenient reality, articulated in the opening lines of Susan Sontag’s treatise Illness as Metaphor:

Four years after I first sat down with that blue notebook, I’m still not finished.

In the stories I tell now, I have herpes because I am human. And very much alive.