It's Only Cute When Skinny Girls Eat Pizza 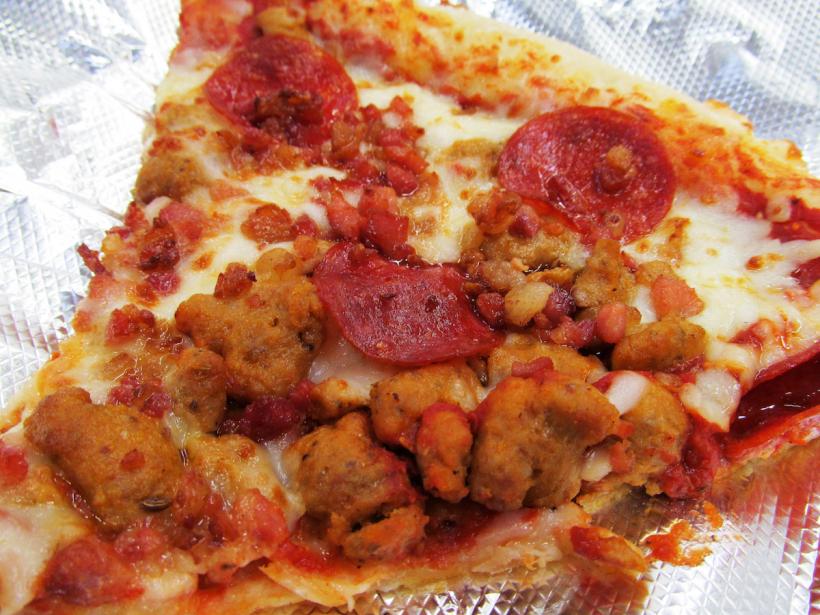 Nowadays, if I eat more than two slices of pizza in front of anyone other than my wife, things get weird.

The pizza itself is still good, but the baggage it comes with can seriously color our overall experience.

This is an article about pizza. Well, sort of. Have you had pizza? I bet you have! Pizza is great! I think we can all agree, pizza is pretty damn good and it comes in approximately one million varieties. Eating pizza is wonderful and an enjoyable and most people like to eat it for that reason. Pizza: A Positive Experience For Most People.

Except... the way our society perceives you eating pizza can seriously affect your enjoyment of said pizza. The pizza itself is still good, but the baggage it comes with can seriously color our overall experience.

This is actually true of pretty much all things. Whether it be food, sex, exercise, TV, meditation, or any other activity that we might enjoy all on its own, how our culture reacts to us engaging in said activity is a real thing, and it’s a thing that can get inside our heads.

When skinny girls eat pizza, it can be seen as cute. But if a fat girl eats pizza? Nope.

Today, I want to talk about food specifically.

I love Gilmore Girls. I once had a friend plan to make a Luke Danes fan zine and I was totally on board to contribute to that. (If you are that friend and you are reading, I am calling upon you: Now is the time! It is probably inappropriate for me to single you out right now, but I don’t care — Luke Danes is important to me!)

But my favorite thing about Gilmore Girls is actually pizza.

But in Gilmore Girls, Rory and Lorelai eat pizza. And Chinese food. And ice cream. And multiple Thanksgiving dinners in one day. They eat when they’re sad and they eat when they’re happy. And it is not portrayed as a moral failing! It doesn’t make them bad people — it’s just a fun, cute, quirky thing about them.

When I first watched the show, I loved that. It felt like a step in the right direction. It felt like shouting, “See? Girls can eat, too!”

But there’s a problem, and it’s a problem I didn’t see until recently.

When skinny girls eat pizza, it can be seen as cute. But if a fat girl eats pizza? Nope.

I know this, in part, because I’ve lived it. I was skinny as a teenager; these days I am, according to those fun BMI charts, obese.

Now, mind you, I’m healthier in literally every way than I was as a teenager. I get sick less. I’m more physically active. I eat more vegetables. I drink more water and less Mountain Dew.

But there’s one thing that hasn’t changed! If the mood strikes me, I have pretty much no problem putting away an entire large pizza by myself, and then lying on the floor, reflecting on how delicious it was.

When I was skinny, people thought that was funny and impressive — and yes, sort of cute.

They were vocal about it. They had no problem telling me exactly how they felt about my pizza consuming abilities. “Wow, Katherine!” people would say. “I can’t believe you ate all of that! Can you even move?” And then they’d laugh softly, and/or congratulate me on not having an eating disorder (which is also messed up, but that’s another topic for another day).

Nowadays, if I eat more than two slices of pizza in front of anyone other than my wife, things get weird. People raise their eyebrows, look away, and become visibly uncomfortable. They look worried. They do not say anything, and if I mention how much I am eating or how much I am enjoying my meal, they pointedly change the subject. This has been true for people who are fairly body positive as well as people who hold more hegemonic views of weight and size.

Thin women can overeat, and it is seen as a quirk, or a one time indulgence they deserve, or even proof that they aren’t anorexic.

Fat women, though? We are expected to constantly prove that we’re doing our best to not be fat. By saying no to that third slice. By opting for salad instead. By never, ever eating just for the sheer enjoyment of eating, and never eating another bite after we’re full.

Apart from being unpleasant, this shame around eating reveals the larger hypocrisy with our societal obsession with size: Again and again, we hear that this is a health issue, and that it’s not that people hate fat people, it’s that they’re just concerned — because they’re obviously not healthy!

That kind of concern trolling is BS, and there has been so much good writing about why it’s BS, that I don’t want to delve too deep here. But I do want to say this: If it really were about health, we would be just as concerned about thin women eating pizza as we are about fat women eating pizza.

And we’re just not.

And that’s making it really hard for me to finish my dinner in peace.

If you like this article, please share it! Your clicks keep us alive!
Tags
pizza
skinny
fat
body acceptance
body positivity