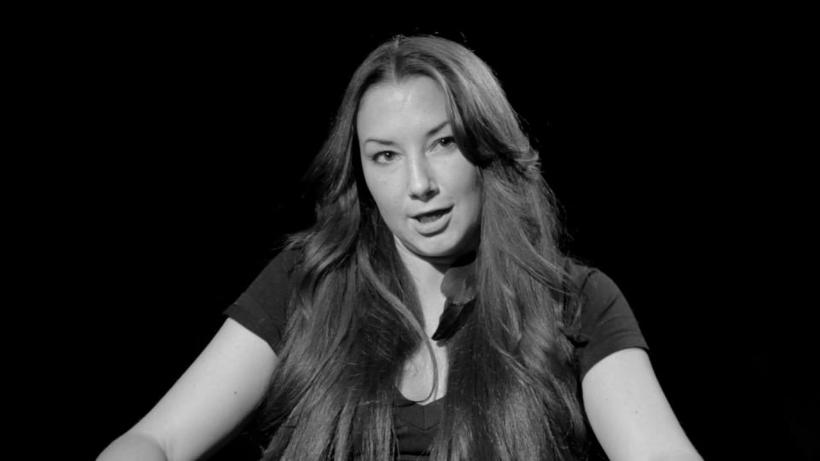 In a “whoever talks the loudest wins” style that she seems to have copied directly from famous-only-for-being-a-fatphobe MeMe Roth, Kerryn manages to commit every fallacy of fatphobia in less than three minutes.

I mean, it would be impressive if it weren’t so horrifying.

She concern-trolls, she tries to replace Whitney’s actual experiences with her stereotypes and beliefs about fat people, she compares fat people to alcoholics, she confuses the idea of someone else’s “best self” with her idea of what that person’s “best self” is — and then she tries to fashion herself into the victim.

Let’s take a look, shall we?

Kerryn starts off on the attack:

“Where does [sic] your sense of personal accountability?”

This idea — that “personal accountability” means that Whitney is somehow personally accountable for looking the way that Kerryn thinks she should look — is our first hint of her grossly over-exaggerated sense of self-importance.

But don’t worry — if you missed it, you’ll have lots more chances to see it in action.

“You know that your struggle is more difficult — shouldn’t that make you work that much harder?”

She is referring to the fact that Whitney has PCOS, which makes short-term weight loss difficult and long-term weight loss even closer to impossible than it is for those without PCOS. By Kerryn’s “logic,” I should be inspired to work harder to wear a size 4 shoe because, with size 6 feet, the odds are stacked against me.

And even if weight loss was likely, nobody has any obligation to work hard, or at all, to be thin.

“Isn’t it more inspirational to watch somebody be up against the odds and the odds are stacked against them?”

Kerryn seems to have deluded herself into believing that she is the arbiter of what is inspirational.

I personally find it much more inspirational to see fat people who live in a society rife with weight-based oppression and fatphobia rise above that.

Sorry, Kerryn, the whole world does not revolve around what you think. I guess you’ll have to find some reruns of How To Emotionally and Physically Abuse Fat People for Profit The Biggest Loser.

“Yeah. The odds are stacked against you, I’m sorry, but that’s life; put your head down and work.”

Oops, Karen has misplaced her beeswax and incorrectly assessed that it is on Whitney Way Thore’s body.

I’m going to go out on a limb and guess that the idea that Kerryn should be in charge of how Whitney directs her energy is more laughable than any of Kerryn’s stand-up.

This is absolutely not her place to say, and the fact that she thinks it is should be proof enough that she isn’t credible in this discussion. Whether or not the odds are stacked against them, nobody is obligated to try to manipulate their body size — ever.

Whitney is finally able to get a word in edgewise and explain:

Because, of course, Kerryn thinks that she knows better than Whitney about Whitney’s life. Of course she does. When a fat person does an anti-fat bigot the courtesy of sharing our experiences so that they can develop a better understanding of where we are coming from, it is incredibly common for the bigot to essentially stick their fingers in their ears and scream, “LALALALA I CAN’T HEAR YOU!”

You’ve gotta ask yourself — why does Kerryn think that her assessment of Whitney’s honesty is important to anyone but herself?

“Like, are you surrounded with people who are like-minded and agree with you and support you? I mean, my thing is, if I were to surround myself with people who are like, ‘Oh well, Kerryn has a problem, but let’s just let her do what she wants to do and we’ll all get on-board and watch her drink and fall on her face and I’ll just...’ — Why wouldn’t I continue on that path? You know, what would ever make me want to change? Isn’t it important to like maybe surround yourself with people who don’t always agree with you all the time.”

Alcoholism is a complicated and devastating disease. People dealing with alcoholism should be treated with compassion and have full access to treatment options of their choosing.

And people who try to compare being an alcoholic to being fat should be told clearly that they have no place in this discussion, because they are talking nonsense.

Let’s examine the situation: Alcoholism is an illness centered around the behavior of drinking. Body size is a state of being affected by many factors from genetics to environment and more. Fat people are as diverse in our behaviors as any group of people who share a single physical characteristic.

Being fat is no more comparable to being an alcoholic than being short is.

I must have missed my invite — when they held the ceremony to declare Kerryn Feehan the boss of what everyone’s “best self” looks like, was it nice? Did they have good appetizers, or just celery boats filled with bitterness?

And while interventions to help people confront alcoholism are controversial, there is not a shred of evidence that suggests that fat people surrounding ourselves with fatphobes improves our health or changes our body size.

Whitney takes this opportunity to ask a very pertinent question:

“I just don't take very kindly to assumptions being made about my weight and health, and also, why do you care?”

If you’ve been waiting for the “I have fat friends” moment, you’re not going to be disappointed:

“I have a friend and I have a few family members that have struggled with their weight their whole lives.”

So here Kerryn attempts to use her one fat friend and few family members to try to justify her choice to grossly overstep the bounds of what might even possibly be any of her damn business. Also, note that it sounds like none of her fat friends and relatives got thin either.

It must be magic to be around Kerryn at the family reunion.

Now the show host breaks in to ask what I think is a thoroughly asinine question (because who cares what Kerryn thinks about fat people?):

Kerryn leaps at this opportunity to try to make herself into the victim:

Let me be the first to suggest that a great solution to this would be for Kerryn to stay as far away from fat people as possible — and please, start with me.

Whitney, as astounded as anyone else who understands basic logic would be, asks, incredulously:

Raise your hand if you can think of a reason why fat people who have to deal with Kerryn might be in a bad mood? 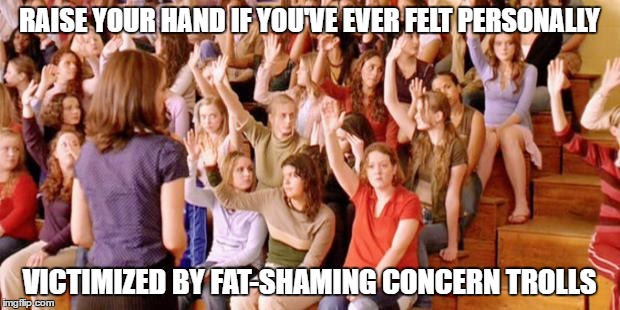 “You don’t think that maybe if you had tackled it head-on and like done the best you could be and presented your best self you would feel more confident?”

When they held the ceremony to declare Kerryn Feehan the boss of what everyone’s “best self” looks like, was it nice? I must have missed my invite. Did they have good appetizers, or just celery boats filled with bitterness?

Whitney then points out that she, in fact, did lose 100 pounds and that things were not as Kerryn said they would be. So Kerryn decided to go on the attack again.

“You’re not there now. You’re not that. Maybe that’s why you’re yelling at me: because you’re cranky and hungry.”

Poor Kerryn isn’t able to grasp the difference between alcoholism and body size, the fact that there are people who are inspired by different things than she is, or even basic shit like what is and is not her business, so I don’t think we can be surprised that she doesn’t understand the research around weight cycling/yo-yo dieting.

What I do find mystifying is that she is freaking out about Whitney Way Thore not dieting, but then assumes that she’s yelling at her because she’s hungry.

Methinks the dieter doth protest too much.

At some point, Kerryn realized that it would be easier for her to substitute her own stereotypes, preconceived notions, and bigotry for Whitney’s actual experience if Whitney weren’t there, so she took to her blog to claim that her appalling behavior is all under the guise of “not being an enabler.” (She’s a hero, y’all, for refusing to enable people to live a life without bullying, shaming, or concern trolling!)

She made up a story about Whitney having a food addiction, made unsubstantiated claims about PCOS, and declared that “we should also work to be the healthiest version of ourselves.” (In addition to other people’s bodies really, really not being Kerryn’s business, I’ve talked about the serious issues with this idea on my own blog.)

At this point it should be clear that Kerryn is simply not capable of entering discussions about fat people without coming from a place of stereotyping and bigotry, and so (with a nod to Henry Rollins) the captain has turned on the “sit the fuck down and shut the fuck up” light.

Of course, this entire thing is based on the completely flawed premise that living in a fat body means that you are public property to be shamed, stigmatized, bullied, harassed, and have war waged against you in ways that are astoundingly sizeist, healthist, and often ableist.

When it comes to the question of whether fat people should get to live without shame, stigma, bullying, harassment, and oppression — no matter why we’re fat, what the consequences of being fat might be, or if we could (or want to) become thin — the answer is HELL. YES WE SHOULD.

This is not an opinion; this is not up for debate. There are no other valid points of view.

Anyone who agrees is right, anyone who disagrees is wrong, and that’s all there is to that.