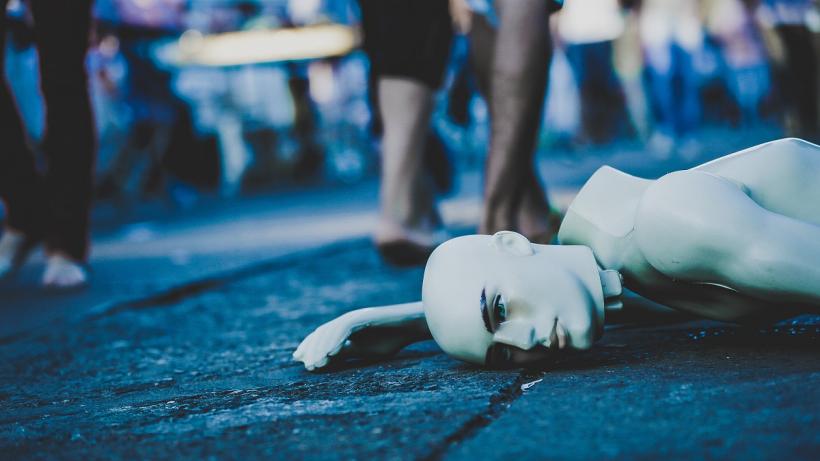 “You will only be happy if you ‘get rid of’ your illness.”

For a long time, I believed that my mental illness was my own doing.

Back when I was dealing with a depressive episode, one of my partners told me, “Sam, you have to remember that not everything you think is true.”

Simple, but it was a real revelation for me. Sometimes with bipolar disorder, it’s incredibly hard to distinguish between your own voice and the fears, trauma, and outright lies that run on a loop in the back of your head.

I liken my experiences with mental illness to being in line at a grocery store: I’ve placed everything on the belt and, while the cashier is ringing everything up, some snot-nosed jerk is placing random items on the belt when I'm not looking.

Suddenly, I’ve got bullshit I didn’t even want and I’m the one paying for it.

Mental illness has a sneaky way of selling us lies. Before we know it, we’re leaving the metaphorical grocery store with 10 pounds of dog food for a dog we don’t even have. We’ve got heaps of cashews and a nut allergy.

In other words, someone pulled one over on us.

Not to be outdone, I’ve compiled this list of some of the worst lies mental illness has ever told me. Because while it might be in my cart, I’m sure as hell not buying it.

1. You just aren’t an ambitious person.

For the longest time, as I struggled under the weight of my depression, I watched my friends and peers excel in their passions and/or careers. I was amazed with how driven they were, and wondered how they seemed to have it all.

Then I looked at myself, floundering. And I thought, “I’m just not driven like they are. I’m not ambitious. It’s not who I am.”

What I wish had occurred to me then was that when you’re struggling with mental illness, every bit of your resources goes towards your own survival.

Not getting a byline in The New York Times, not mastering a second language, not getting a graduate degree or whatever impressive thing I thought I “should” be doing. Because staying alive? That was my priority. My only priority.

As I began to get the help I needed, I was able to start setting goals for myself and enjoying the pursuit of those goals. As it turns out, my “ambition” or work ethic wasn’t the problem — it was a psychiatric disability.

(That, and, you know, how capitalism tells us what is and isn’t “success” and how it’s often super ableist in the first place...)

2. This is the way things will always be.

I can only speak for myself in this instance — I won’t assume to know anyone else’s situation. But when mental illness tells me that I somehow have the ability to know the future and that the future is entirely dismal, I’ve learned to be a little more skeptical.

The reality is that I know nothing about the future with any certainty. That is not a psychic ability I possess, no matter how my depression might make me feel.

I remember where I was just a few years ago, desperately suicidal and lost, feeling that there was nothing ahead of me that was worth holding on for.

And then I look at where I am now, doing meaningful work and surrounded by a beautiful community that cares for me, and I can’t believe how wrong I was about my future.

I said that my future was empty. I believed that with everything in my being. But it couldn’t be more full, more vibrant, more fulfilling.

I have stayed in relationships that hurt me on every conceivable level because I honestly believed that I was unlovable. I thought that any person who loved me in spite of my illness was some kind of heroic savior to whom I owed my life.

I couldn’t have been more wrong.

The truth is that we all have endured some kind of trauma. We all bring “baggage” to a relationship — some more than others — because we have all lived, we’ve all been hurt, we’ve all been broken.

Those experiences are not flaws that make us unworthy of love — they are experiences that have shaped who we are. And the people who truly love us for us will know that mental illness is not a character flaw, but a struggle that makes us so very human.

The folks who can’t understand that aren’t proof that we’re unworthy. It simply means that they aren’t ready to be a part of our journey.

4. You will only be happy if you “get rid of” your illness.

I used to think that I would only be happy if I came as close to being “neurotypical” as possible. I thought that I needed to be cured to live a whole, fulfilling life (which is one of the downsides of the medicalization of our struggles, but that’s a story for another day).

What I’ve learned is that recovery is not about eliminating my mental illness.

For me, it’s been coexisting with it, adapting in the face of its challenges, and understanding how to ride the waves as they come.

My recovery has been about turning down the volume so that it’s no longer ear-shatteringly loud and senseless. Recovery is taking the unbearable sounds and quieting them into music.

5. Your struggles are all your fault.

For a long time, I believed that my mental illness was my own doing.

I believed that if I had chosen differently, the outcome would have somehow been better — maybe I wouldn’t be bipolar, anxious, agoraphobic, messy, broken.

It’s harder to be honest and say, “It’s a complex combination of biological, sociological, and psychological factors that I will probably never understand in my lifetime.”

It’s harder to accept that some trauma may be inevitable or out of our control.

It’s harder to accept that society conditions us to feel like we are at fault for our own illness.

And I’ve found that, in the end, choosing compassion has done more for me in my recovery than self-blame and self-deprecation ever have.

And yet, my birthday rolls around every year, and I spend a good portion of my day in tears because I can’t believe that I’m still here.

Not only am I grateful that I’m here, but I’m grateful for the person I’ve become — someone who wouldn’t be who he is without the struggle it took to get here.

By no means has this been an easy road. And some days — when my anxiety is so raw that I can’t leave my apartment, or when I’m wide awake at three in the morning, convinced that I’m total human garbage — I really wish that the journey had been easier rather than longer.

But I can honestly say that of any lie mental illness has ever whispered into my ear, this is the one that I’m most grateful to be wrong about.

If you like this article, please share it! Your clicks keep us alive!
Tags
mental illness
mental health
anxiety
bipolar