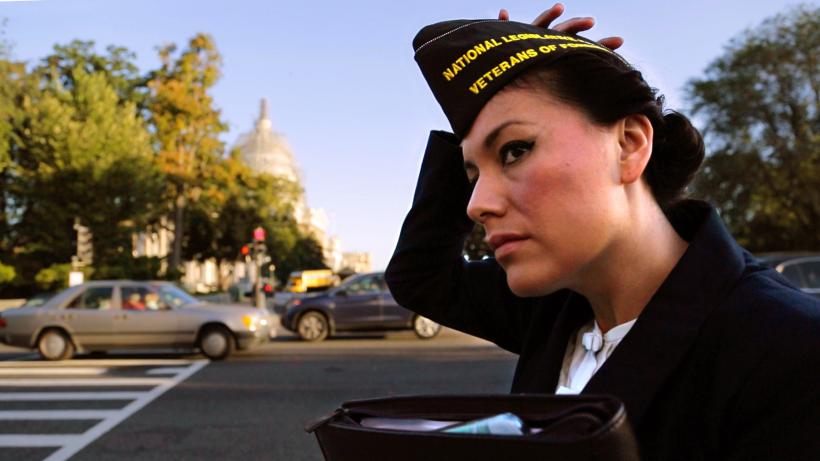 “Every day is Veteran’s Day,” says a member of the Veterans of Foreign Wars (VFW) team in After Fire, a documentary by Brittany Huckabee. They are canvassing Capitol Hill on behalf of top issues impacting those who have served.

Unfortunately, this is not the case.

After Fire takes an on-the-ground look at how three female veterans are struggling to cope and move forward in the aftermath of their service.

Huckabee places her account in San Antonio, Texas, where one of the biggest populations of female veterans in the nation resides.

Before unrolling the narratives of her main characters, Huckabee presents stats on women in the military:

Projections show that by 2025 more than one-quarter of the military will be women. It’s time to pay more than lip service to this underserved and under-recognized demographic of the armed services. As one woman states, “It’s a life altering event to go to war. You don’t come back the same.”

In a male-driven military culture, a specific mindset is promoted: “It’s all about the mission.” The mantra is, “Another day, another death. Do your job.”

Coming back to civilian life from a “surreal situation” is a major shock. It demands a transition from a form of coping where hiding the truth about negative encounters is key. Speaking about them makes what happened too real. Women vets are encouraged to suppress their feelings and not appear “weak.” This leads to isolation and an absence of support.

“I wanted to give women veterans a starting point to owning what happened to them,” she emphasized. Huckabee hopes that the documentary will be a tool for military women and their families to open conversations.

The women profiled – Valerie Sullivan, Laly Cholak, and Roberta Castaneda – share their individual experiences. The common thread is the struggle to come to terms with the challenges they have faced and the road back to healing, self-understanding, and self-acceptance.

At the start of the film, each woman appears best at offering assistance to their peers at weekly support groups. They admit, “Dealing with others’ stuff is easier than dealing with your own.”

Valerie served as a Security Policeman in the Air Force from 1986 to 2007, joining out of high school. “I did SWAT stuff,” she relates. She holds a dual Master’s Degree, a Black Belt, and is a body builder. The camera follows her through her role as a social worker.

Entering the Army at 17, Laly served from 1999-2013, in locations including Kuwait and Iraq. She works with veteran treatment courts, as well as promoting the needs of vets with elected Texas officials.

Roberta served in the Army for ten years, joining in 2000. She was motivated to provide a better life for her children and to be a role model. She is a facilitator with Grace After Fire, and has a Master of Arts in Counseling.

In the course of following the women’s daily activities, the audience is exposed to numerous topics. There is a hearing on Texas House Bill 867, tasked to establish a Texas Women Veterans Program. Only a few state veterans commissions have official programs for women. Additionally, 30 percent of VA hospitals have no gynecologists on staff.

A key problem is the handling of rape and MST in the forces. Vets claiming MST must meet a “separate standard of proof than all other PTSD claims.” Those who file claims with the VA for MST have a one-in-three chance of getting it approved.

When women apply to the VA for benefits related to MST and don’t receive them, they feel invalidated and that “nobody cares.” The Ruth Moore Act is seeking to remove obstacles facing women submitting claims to be compensated for benefits as a result of MST.

I spoke to director Huckabee about her goals for the movie. “I wanted to give women veterans a starting point to owning what happened to them,” she emphasized. Huckabee hopes that the doc will be a tool for military women and their families to open conversations. “It’s about what happens next,” Huckabee underscored.

At an event where Roberta addresses a gathering, she captures the essence of the ongoing endeavor:

“We all have our stories. We’re all on our own journey. Embracing our truth is the only way we’re going to be able to progress. There are so many resources out there. You are not alone.”

If you like this article, please share it! Your clicks keep us alive!
Tags
Veteran's Day
After Fire
Women Veterans
Veterans' Rights