Ask Erin!: Burned In The Bay And The Boa Constrictor 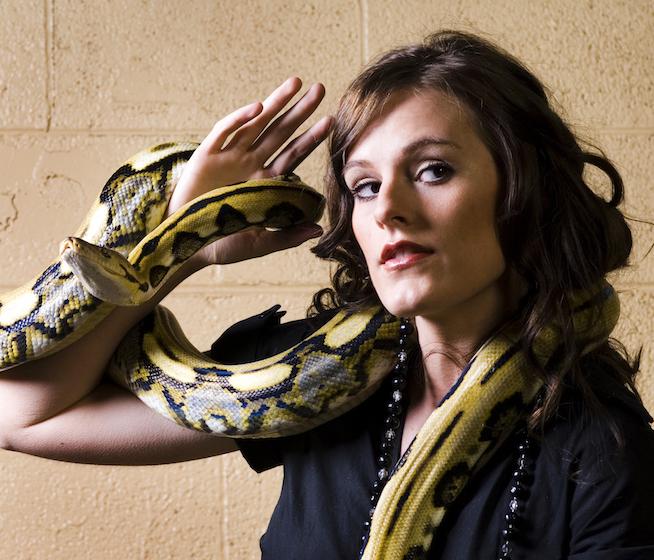 Beware of the boa constrictor...

She’s made all the mistakes, so you don’t have to…Ask Erin! is a weekly advice column, in which Erin answers your burning questions about anything at all.

You’ve got questions. I’ve got answers. A brand new installment of Ask Erin!, where you’re sure to get good advice, given poorly…

I moved to NY at 23, with a naive determination that if I could make it there, I could make it anywhere. But, I moved in the dead of winter, with few job leads, and a new boyfriend. Said boyfriend and I started dating a few months after he broke off his engagement (he cheated) and a few weeks after I had set this whole NY plan in motion. About 6 months in, I landed a great job that enabled me to move to Oakland with my boyfriend. At that point, our relationship seemed more important than any life I had imagined for myself in NY. Fast forward a few months into so-called domestic bliss, and shit hit the fan.

He confessed to me (after a hamburger and during a Michael Fassbender film) that he had slept with his ex-fiance while I was in NY. I was devastated, and not because of the sex, but because in my gut I knew it all along and he totally made me feel crazy! So many of our arguments came down to trust and my insecurity that I was living in the shadow of their relationship. A month later, I ended things and moved back to LA—with my parents. My life fell apart and his went on interrupted. He started seriously dating someone less than 2 months after I moved out. He told me over email, and Instagram confirmed my worst fears. They were revisiting all of our old spots. She was sleeping on my side of the bed, they visited his parents. They had pet names. She even had a photo in my old apron cooking with my pots.

In the six months (!!) since our breakup, I turned 25 and started a new life in LA. I've also called him and sent more emails and texts than I can I even recall. Some of them have been sweet (read desperate and sappy), but most of them have been hate-filled and bitter. And while he has clearly moved on, I am still stuck in this loop of longing and of grief. I feel like I never got closure, and I can't help but feel like I was a placeholder until he found someone else. I want to start dating again, and to stop feeling like such a victim, but it hasn't happened yet. I've tried therapy, Tinder, yoga, meds, drinking, not drinking, even an "energy healer." I'm just heartbroken. I miss someone that clearly wasn't right for me, and that obviously was more than ready to move on. So, how do you "get whole" again after being someone else's other half? How do I escape the feeling of being "replaced" and move on to something more mature and healthy? I don't want to always be thinking about the coulda-woulda-shouldas and what "might have been" or "what was", especially with someone who doesn't even think of me...Is this normal? Am I a total mess? And yeah, I know lurking is so creepy/unhealthy/stalkerish.

Burned in the Bay

My first question is, which Michael Fassbender film? Are we talking Inglourious Basterds, 12 Years a Slave, that one where he plays a sex addict (Shame)?

Honey, this guy was totally gaslighting you — by denying the truths you sensed. UGH.

Oh, Burned in the Bay, yeah you might be a bit of a mess, but that’s OK. You are so young and, as you pointed out, this was your first big love. The hard truth? It is mostly time that’s going to get you where you want to be, un-heartbroken. Block him on social media. Remove yourself from social media, if necessary.

The thing about therapy, yoga, meds, energy healing, and even Tinder — these things still take time to work, more time than 6 months, especially if you want them to fundamentally change patterns so that you don’t date the same guy over and over again.

Yeah, it sucks, you were replaced. And his ex before you was replaced by you. He sounds like a guy who doesn’t know how to be alone, which is troubling. Your coulda-woulda-shouldas probably would have led you to the same place — the end of the relationship, because he doesn’t sound so healthy himself. I PROMISE that you will look back on this and be grateful that he cheated on you, because it allowed you to exit this mess before you got even more locked down.

First off a little background: I am 31 and my girlfriend is 29. We have been dating for about a year now and everything has been awesome with our relationship until recently. I feel like I'm being smothered. She says I'm allowed to hang out with my friends but I can tell she doesn't want me to. She is constantly putting my friends down and tells me how stupid they are. When I make plans without her she ends up making me feel so bad about it that I end up not doing it.  The control thing didn’t bother me at first, but now it’s a real problem.

I know if i try to talk to her about giving me a little space she will take it completely the wrong way. I don’t know if i have a communication problem or if it’s her totally smashing any conversation that’s headed that way.

What’s the best way to communicate with her and let her know how she’s making me feel?  I still want to be with her, but I also know that this relationship will continue to go downhill if we do not fix this problem because I’m resenting her more and more every day.

Dude, I hate to be the one to tell you this, but get out of this relationship. Sure, first, tell her what you need — a relationship where your girlfriend/mommy doesn’t need to give you permission to see your friends. But, I am doubtful that she will hear this.

She sounds like someone who could use some talk therapy. I know I say this a lot when people ask about all these relationship problems, but her boa constrictor grip is a HUGE RED FLAG. Maybe she’s doing that awful trick — making you pay for whatever the guy before you did. It doesn’t even matter why. She’s old enough to know better. And, you are, too.

One thing you may need to change is the way in which you communicate. You’re a grown ass man. You should be able to clearly state what you feel and what you need. Maybe you don’t do that. Maybe you acquiesce because you’re afraid of being the bad guy or afraid of her reaction, and are then stumped by why you didn’t get what you want. Tell her, “I love you, but I need time with my friends, too.” It is 100% acceptable to want your own life, outside of your relationship. And, in a healthy relationship where trust is present, this should be a no-brainer.

If you like this article, please share it! Your clicks keep us alive!
Tags
Ask Erin
relationship advice
advice
advice on love
rarelywrongerin