Body Positivity And The Ebb And Flow Of Self-Worth 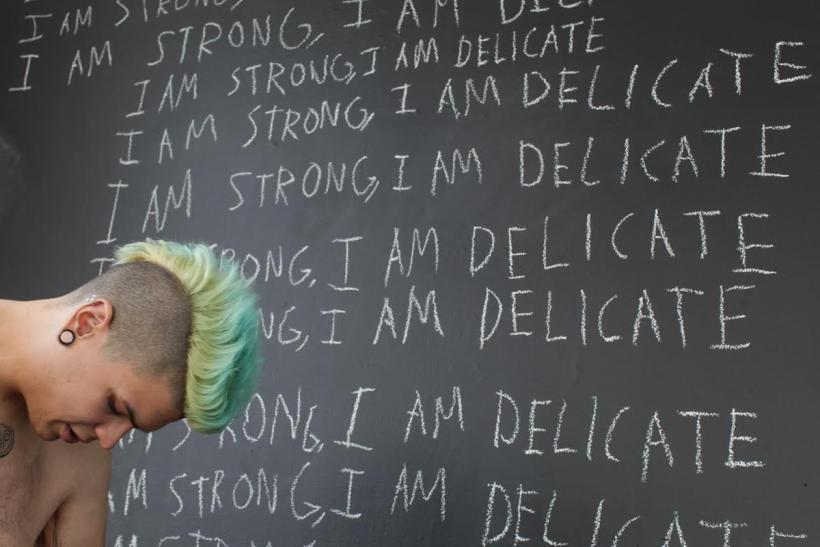 Each of us is on a journey, and the detours can teach us just as much as the set path.

To say that in the past I’ve had a tenuous relationship with my body would be an understatement. People have tenuous relationships with mostly-absent parents. I’ve treated my body like the arch nemesis in some YA film (luckily, though, it's the kind of movie where the hero and the nemesis have to work together during the climax, and end up becoming friends).

By age 16, I weighed nearly 500 pounds. After losing 270 of those pounds over four years, I began to hide my excess skin from the people in my life. I was ashamed that I had worked so hard to lose weight, but my body didn’t look the way I wanted it to. At my heaviest, I was convinced that something was wrong with how I looked — but now, the excess skin only made me feel like my body was “wrong” in a different way.

For two years after my weight loss, I treated my body like a closely-guarded secret. I never took my shirt off in public or even talked about the excess skin online. Only my parents and best friend had seen what I looked like without clothes.

The first woman I’d ever opened up to about my body kicked me out of her home. It was difficult to see my body as anything but a problem that needed fixing.

In March 2015, I received an anonymous question on Tumblr from someone who wanted to know if I had any excess skin from the weight loss — they did, and felt self-conscious about it. Someone was reaching out to me, trying to find a friend in a struggle that I knew was scary and isolating. After a lot of thinking (and some panicking) I decided the right thing to do was to open up, to share my excess skin with those who followed me.

I posted a video on Tumblr that day, revealing the body I’d been hiding from those in my life, as well as online. In days, the video went viral, totaling over 100 million views on dozens of websites along with hundreds of articles and interviews. I was exposed, cast into the limelight, and millions of people had seen and shared my message.

More important than my own vulnerability was the realization that every person, regardless of size, has been made to feel like something is wrong with their body at one point or another. I was flooded with thousands of messages from people of all ages, genders, and body types who said they didn’t feel alone anymore.

Neither did I. I finally began to truly and completely love myself.

But what happens when that self changes radically, within the span of a day?

In a painful haze, I begged the nurse and doctor to “loosen my belt” — when in actuality my skin was too tight for me to comfortably breathe in deeply. There was a surreal and dissonant feeling that washed over me the moment I was aware of what had happened. I laid alone, in a daze, feeling like Frankenstein’s monster, as I began to really understand how I’d been cut open and sewn back together. My body didn’t feel like mine in those moments, it felt like a marionette I controlled as I watched through a screen.

The month that followed was one of the most difficult of my life. Pain and exhaustion can be managed, but the fallout of waking up in a body that was radically different had left my self-esteem in a vulnerable place. I spent three weeks locked away in my room — like Quasimodo, but with Netflix and potato chips. The exhaustion of healing, and the inability to groom, bathe, and dress myself in the way I’d become accustomed to, left me looking haggard, feeling far from the person I’d grown to be.

Despite all I’d learned to love about myself, there were moments when I began to doubt whether or not I was truly body positive. I thought I’d gotten there, but this shakeup was enough to make me see myself in a negative light again.

I spent so many years wearing whatever 6XL clothing I could find; once I had options, I fell in love with crafting my look. For ages my body felt like a hotel room, a place I stayed with the facade of a home, but foreign and sterile.

Taking the time to find clothes that I liked, to dye my hair, and get tattooed —  for the first time I was building a place of my own.

When I lost that ability for a while, being too weak and swollen to really put the effort in, it felt like I’d lost a part of myself. It felt like I’d regressed, like I’d gotten to the finish line and was forced back into the race.

This is the trap we fall into when we discuss recovery, emotional development, mental health, or body image: believing there’s a destination.

It can be difficult to realize, especially during times of rapid growth, that there is no finish line. There will never be a singular moment when you catch yourself in a mirror and say, “Oh yeah, I’m recovered now!” The unfortunate truth is, we aren’t capable of unlearning certain ideas; instead, we must address, confront, and continue to move past them. We never hit that finish line — it’s a race we have to continue running every day.

The times when we feel most vulnerable don’t undo or impede our progress. There are bumps and detours on every journey; moments when our resolve is shaken and our strength is tested are capable of teaching us great things. No core beliefs come without doubts. Transcending those doubts gives us a more balanced view of those beliefs as well as ourselves.

Body positivity is a mindset, not a goal. Each of us has bad days, even bad weeks, but waking up to find you can't look at yourself in the mirror doesn’t mean your hard work has been in vain. Body positivity means that even when those days rear their ugly heads, you don’t let it detract from your sense of self-worth.

In those moments, we need to treat ourselves with more care and kindness than ever. When the voices in your head, cacophonous and overwhelming, scream that you have no value, body positivity is the booming voice in your heart that says, “Yes, I do.”

We never truly stop growing. Human beings are a living series of fluctuating thoughts, feelings, and experiences that change as often and drastically as we affect the world around us. There is an ebb and flow in the way that we see ourselves. It isn’t inherently good or bad — it just is. There are positive and negative qualities in each of us, and the balance of those different parts are what add up to the wonderful human beings we are.

Coming from someone who acted as though their body was an enemy for years, trust me when I say this: Be kind to yourself in all respects, especially when you’re feeling most vulnerable. You’re deserving of love, even if you don’t like everything about yourself right now.

You are a journey, and no matter where you end up, it can be beautiful.

If you like this article, please share it! Your clicks keep us alive!
Tags
body positivity
body image
Matthew Diaz
surgery
weight loss