Can I Be Bipolar And A Good Parent? 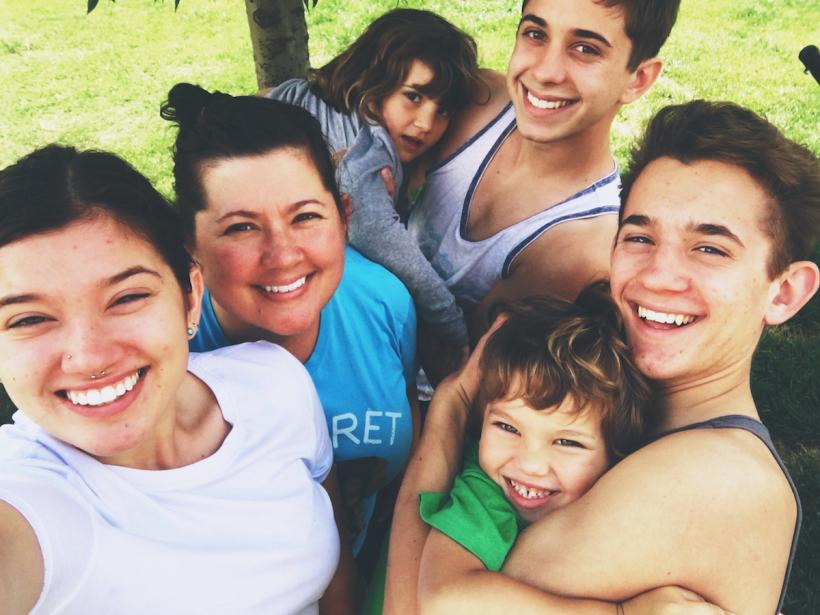 I was always scared, as much as I didn’t want to be my mother, I was.

On an August afternoon, I found the boys in a hurricane of kicks and slaps, a violent disagreement over something simple, Legos or Hot Wheels. I can’t remember which; it doesn’t matter. I raised my voice, yelling, STOP.

Despite my clenched fists, my volume, the anger in my eyes and in my scowl, their fighting continued.

My rage reached boiling. I don’t know why, of any fight, this fight was the fight that broke me, but it did. I picked up a wooden chair near the door and brought it down on the hardwood floor in a crash, splinters flying, the wooden-plank flooring scratched, marred from the leg of the chair and my rage.

The boys’ expressions were frozen in terror, their bodies frozen in fear. The fighting stopped.

In the summer of 1983, my best friend ever in the entire universe came to my house for a sleepover. My house was the best house for sleepovers. I had Twinkies and microwave popcorn, Fruit Roll-Ups and A&W Root Beer — all the things nine-year-old dreams are made of.

The cabinets were organized alphabetically; Twinkies by the Triscuits, popcorn by the Pasta-Roni. The punishment for disrupting my mother’s organizational schematic was severe. I didn’t dare disturb the rows.

I had a daisy comforter and three decorative pillows that matched my lime green headboard. I had my own black and white TV and eight Cabbage Patch dolls. My mom would sometimes be gone all night — my friends knew this, their parents did not. This only made my house better.

Me and my best friend forever ate the popcorn, and everything else, and watched whatever was on TV (which wasn’t much in 1983). And went to sleep.

When we woke up Saturday morning, the house was quiet, but for the sound of the cat, and I had a new stepfather.

Steve worked construction and smelled like stale cigarettes, tequila, and freshly milled 2X4s. He yelled a lot. I didn’t like him. He had three poorly behaved, filthy children; I didn’t like them either.

Friday night, while I ate an entire package of strawberry Fruit Roll-Ups and drank my weight in sugary soda, my mom and Steve went to Vegas. And Saturday morning I had a new family.

The next week, in the middle of a school day, my mom pulled me out of class.

I was always scared, as much as I didn’t want to be my mother, I was. I ignored it, medicating the long troughs of depression, celebrating the months of boundless energy, denying the dysfunctional behavior:  the out of control spending, the risk taking, the defiance, the promiscuity, the rage.

There were a lot of schools.

From school we went to Steve’s house, which was small and dirty, remotely located, surrounded by flooded groves of walnut trees and fields of blooming cotton. There was one bathroom and two bedrooms, a one-legged dog and some chickens. There were six people. I didn’t like tequila, Steve, or his three kids, or his dirty country house. I didn’t have a choice.

I was at the next school, my fourth one, for a year. At the end of that year, my mom left Steve, we left the walnut groves and the dirty house and moved back into town, and I went to school number five, which was actually school number two.

At least I’d been there before.

Ten years later, in 1993, I was living on my own, helping my mother’s sixth husband raise my four-year-old sister.

My mom was living in a remote city in Northern California, with a meth addict who would become her seventh husband. She lived in a run-down shack of a house on a raised foundation. Fleas jumped through the floorboards. Frogs jumped into the bathtub. I don’t know if she was happy there. I only saw it once. Once was enough.

I was living two and a half hours away from her, in college, married, pregnant, terrified.

In early adulthood, the bipolar disorder that was my genetic destiny was pushed around — shuffled from doctor to doctor, city to city, misdiagnosis to misdiagnosis. Deeply distressed, consumed by sadness after the birth of my first child, they called it “postpartum depression.” If I had manic energy, they called it “drive” or “passion” or “dedication.” Snap decisions, irresponsible, risky, promiscuous behavior — it was just “life learning.” I never finished anything I started, something always got in the way.

It was never Bipolar Disorder.

My magical thinking, my invincibility.

The waves of crippling depression.

The mania that created its own vortex.

It was always Bipolar Disorder.

I wanted desperately to be anyone but my mother, but, always suppressed, always explained away, I was often exactly like my mother. All night sewing marathons, consuming obsession with fitness, organization, church, gardening, decor, 17 kinds of crafts, Triscuits next to Twinkies. Pasta Roni next to popcorn.

I had three children who were pushed aside whenever I was sad or busy, which was a lot of the time. I yelled. I cried. I retreated. I apologized.

I did it all again — an infinite loop of dysfunction.

I was so sick.

I wanted to be the best mother. The opposite of my mother. I wanted to do it all, and well. But a lot of the time I wasn’t doing it well.

I was doing what I could. But sometimes what you can do isn't enough.

I was always scared, as much as I didn’t want to be my mother, I was. I ignored it, medicating the long troughs of depression, celebrating the months of boundless energy, denying the dysfunctional behavior:  the out of control spending, the risk taking, the defiance, the promiscuity, the rage.

For 20 years. I was scared. Scared to be her. Scared to do anything to not be her.

When I was 40, and a mother of five, and ready to admit I was like her, I met my first real psychiatrist, a father of three, a quiet, diminutive man, who drank lattes and ate Sun Chips during my appointments. The man who mixed a complicated cocktail of psychiatric medications, and finally leveled my moods. The man that rose my depression, and stole my mania, and bridged the gap between crippling sadness and dangerous madness.

The man who changed it all. The man who helped make me less my mother.

In the 20 years I wasn’t properly medicated, I yelled and screamed and cried. I slept all the time and never slept. I made Halloween costumes. I made elaborate cakes. I made everyone around me crazy. I left my marriage. I made a new marriage. I made new babies. I made my family worry I was becoming my mother.

I made myself worry I was becoming my mother.

Now I swallow the usual pills, and the extra pills he prescribed to force the sleep I hate, to shut me down. We move my meds up and down, in spite of the sometimes crippling side effects. In the name of sanity. In the name of trying to be a safe place for the five children I made.

In the name of not being my mother.

I’m still scared. I’m scared that I may have to one day admit that I was selfish to become a mother, that I should have spared my progeny this disease. I’m scared that the 10 years I lived in denial hurt my three older children, irreparably. I’m scared that they will grow up and write something like this, recounting a childhood of fear and dysfunction. I’m scared that the cocktail that keeps me alive may stop working — that the depths of depression will take hold, and I won’t be able to shake it. And I will die. And leave them motherless.

I’m scared that they might be better off motherless.

Every night I brush my teeth and I swallow seven pills and I hope that I can be better, that I am better.

I hope that what I can do is enough.

portions of this article first appeared on The Leaky Boob.