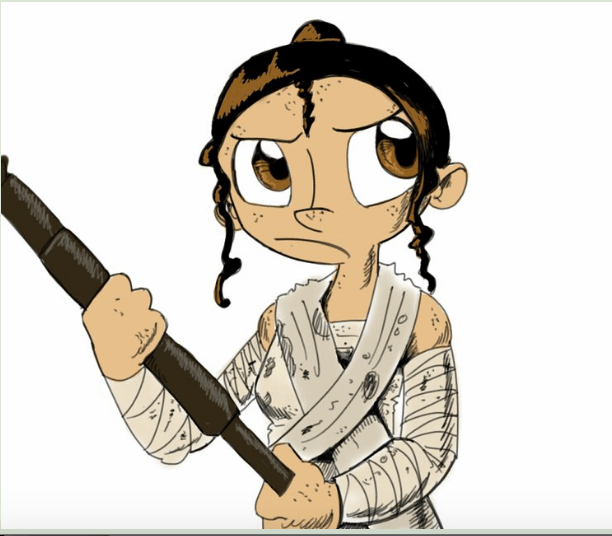 In advance of my daughter’s sixth birthday this spring, I began searching for presents. Specifically, I desperately wanted to buy her figures from the newly-released line of DC Super Hero Girls, and anything related to Rey, the exciting new female Jedi from Star Wars: The Force Awakens. I wanted to buy her these toys because the characters were exciting and strong and different from the many, many princess toys out there.

I thought finding these female toys would be no big deal. I should have known better.

Despite my familiarity with the initial absence of Rey merchandise (which led to the hashtags #WheresRey and #WeWantLeia), I had imagined that things had improved. I also imagined that the makers of Super Hero Girls would have understood the massive demand for their products. I was wrong.

I searched for these toys online at Target, ToysRUs, the Disney Store, and Amazon. The pickings were slim, and the more I searched, the more frantic I got. I was able to find bits and pieces here and there, but I was unable to find an entire set of Super Hero Girls featuring all six of the main characters. And, when I was able to find Rey merchandise or the Super Hero Girls I wanted, I noted that it was considerably marked up from the original price, due to the general scarcity of the products.

Is this yet another tax on girls?

I ended up resorting to a desperate nationwide call to fellow dad bloggers, one of whom was able to send me most of the Super Hero Girls I wanted. The rest I purchased from a combination of Target and eBay. This was a tremendous amount of effort, necessitated by the failures of the toy industry.

Back in November 2015, John Marcotte at Heroic Girls demonstrated how too many toy sets excluded female characters.  They found this problem in Star Wars sets, which, instead of including Rey, included male storm troopers. Toy sets of Marvel’s The Avengers were also guilty, including a male villain rather than the female Black Widow. A similar problem was discovered in Gamora missing from sets of Marvel’s Guardians of the Galaxy.

So what gives? An anonymous writer, and former Marvel employee, wrote for Mary Sue that Disney purchased Marvel in order to tap into the boys’ toy market, believing that it had more than enough products for girls with all its many princesses.

Recent research revealed that Disney princess culture magnifies stereotypes in girls, aids gender segregation, and limits what girls think they can do.

In other words, Disney’s strategy was one of “separate but equal” in that they would sell equal amounts of princesses to girls, and male super heroes to boys.

A more disturbing truth was revealed earlier this year following the #WheresRey controversy. An industry insider reported that Star Wars toy vendors were specifically directed to exclude Rey from Star Wars merchandise because there was a fear that boys would not want a product with a featured female character. Recently, this fear struck again when toys for the all-female Ghostbusters reboot were marketed with only boys on the packages. And, again, when Iron Man 3 had to scrap a female villain because of concerns over toy sales.

In the wonderful children’s book from 2012, Grace For President, the protagonist, upon seeing a picture chart of all the U.S. Presidents, asks in outrage, “Where are all the girls?” She then vows to run for President herself. The question of the absence of girls and women in government and on toy shelves remains just as relevant today, and will remain relevant even if we see history happen come this November.

My daughter knows we have never had a woman president, and that there was a time when women could not vote. I thought it appropriate to take her to Seneca Falls this summer, so she could stand at the site of the first Women’s Rights Convention, and learn more about women’s history and future. After our day there, my daughter told me that the “lady” (Elizabeth Cady Stanton) who declared that men and women were equal and the same was wrong, only in that men and women have different body parts. I responded that Stanton's point was that men and women should both be able to do and be what they want.

Recently while playing outside, my six-year-old took a break and sat down on a bench. She informed me she would be sitting there, “ladylike.”  I asked her what kind of lady she meant? An astronaut, a police officer, or a Senator?

And when she and her three-year-old sister performed a dance routine for me, my older daughter critiqued her sister’s controlled movements by telling her they were “boyish.”

“What’s sexist?” my daughter wanted to know. The conversation begins.

But my words carry only so much weight against the culture that surrounds us. So I pose this question to everyone: When children continue to see the disappearance of strong women, how can they truly believe Elizabeth Cady Stanton’s words about equality?

Indeed, recent research revealed that Disney princess culture magnifies stereotypes in girls, aids gender segregation, and limits what girls think they can do. And, despite my repeated lessons to my daughter in response to the sexism she learns from her peers and children’s media, I sometimes feel I am losing the war. Of course, children don’t realize how much sexism surrounds them, how it impacts their visions of themselves, or what it all means.

Which is precisely why children’s toys and media matter a great deal.