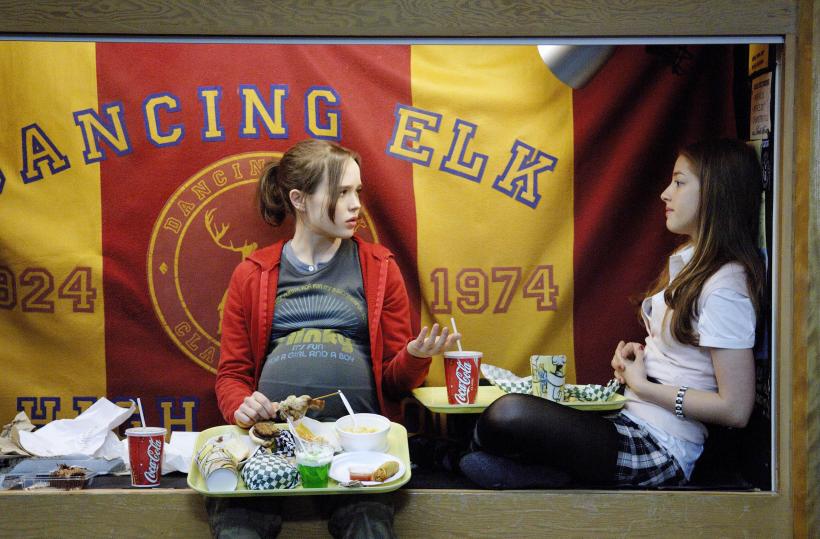 I know deep down I wouldn’t be able to do what Maddie is doing. Image: Fox Searchlight Pictures.

Why can’t I be as strong as you, Maddie?

Maddie* is pregnant. She just turned 20. But it’s me who’s stressing.

After graduating high school three years ago, some of us had plans. The rest of us were just waiting for opportunities. Now, most of us are at university. We catch up for birthdays and loose nights on the weekends clubbing. Growing up any time soon hasn’t been a major goal.

But now Maddie is having a baby.

Hey Everyone! So I have some news to tell you all, I am pregnant! Haha, it was a surprise pregnancy! And I’m about 9 weeks pregnant now, and I don’t wish this to be common knowledge right now so please respect my wishes and keep this to yourselves until I tell people under my own terms, plus I don’t want this to be displayed on my Facebook just yet as I’ve only just told my boss and not my work colleagues. Thank you! I hope you all had a Merry Christmas and A happy New Year!

In retrospect, I’m shocked by how I react.

I laugh. I shake my head with a stereotypical, dramatic NO! and search the comments made by those who have read the notification before me.

Ten comments. Not one of them validating or sharing my doubt — or my humour. For a few minutes my eyes are transfixed on the post. Is Maddie serious? Should I just ignore it?

But there is a little thing called the ‘seen by’ function on Facebook — and it means Maddie knows I’ve read her post.

I feel obliged to comment but I just can’t bring myself to do it. Chickening out, I ‘like’ the post. It’s a low move, I know, but I just can’t accept this has happened to one of my oldest friends.

It’s a short post but the message is clear. Today Maddie’s boyfriend left her. And she assures us he won’t be back. She wouldn’t get an abortion so he is no longer on the scene.

By the time I get to the notification, 22 other members of the group have already seen the post. Only 2 comments — neither of them have been answered.

Maddie has changed her profile picture, reverting back to a photograph I took of her and her twin sister Chelsea* on a European tour in year 11. The caption reads “an oldie but a goodie.”

It’s now that I understand Maddie’s pregnancy is not a practical joke. I text another friend who, Facebook notifies me, has already seen the post. She confirms it’s true. Maddie is definitely pregnant. I shouldn’t feel like this but I do: dizzy and sick. I furiously comb my hair down and think about Maddie constantly. I make up random scenarios so vivid that I can’t sleep.

By late evening I send Maddie a text message.

Thinking of you beautiful. Let me know if you need anything xx

I stare at the message. I’m completely ashamed of myself that I didn’t contact her earlier. Ten minutes later Maddie replies in a series of red heart emojis.

I hate myself. What type of friend am I?

Throughout school Maddie always said I had a way with words. Both of us liked to write and read. We would pass notes describing exotic fantasylands, longing for an escape from the tall gates of our primary school.

When we had friend troubles we stuck close by each other not caring what the rest of the kids in our year thought. We didn’t care if we sat in the playground just the two of us. We had a bond that didn’t need explaining.

I’ll never forget the week we shared at Maddie’s holiday house, the sand between our toes, the two of us speeding around on hired bikes. Nothing could shatter our bliss. We just knew that everything would be okay. Why then is it so hard to put words into meaning right now?

Not happy with my original message I reply:

If you ever need anything just let me know. You’ve been my friend since the beginning so don’t hesitate to ask. Take care ok. All those that matter will be there for you through it all. Xx

By mid-morning Facebook flashes with a notification me asking on Maddie’s behalf if anyone in our group wants to go out for dinner.

Maddie hasn’t left my thoughts and as a result, my face has erupted into a breeding ground for large red pimples. Sleep deprived and grumpy I decline Maddie’s latest dinner invite. At least I muster up the courage to try and make a date for a catch up next week.

Maddie has broken the news to the rest of Facebook accompanied by the baby’s due date in August and latest ultrasound image.

All I can think is: Why?

Why did she keep it?

Why does she want to halt her success in her newly appointed job?

Why didn’t she tell us all earlier?

And then I’m upset again. I think about single mothers and abortions. I can’t think straight.

Why can’t I be happy for Maddie?

Why can’t I accept her choice?

Why can’t I divorce my opinions from Maddie’s?

Why can’t I be as strong as you, Maddie?

I see Maddie. I can’t help but immediately look at her middle area. Nothing. And then the condescending judgemental monster I hate in me says, nothing yet.

It’s like old times. We’re at a party, grooving a little and eating food. Her pregnancy completely slips my mind after a few hours — she hasn’t once mentioned the baby. I know it’s hard for her when the rest of us pull out the alcohol and talk about travelling and seeing the world.

When I’m by myself, she takes up a chair next to me. “I know I have you. All of you.” Maddie smiles.

I’m glassy-eyed and find a warm sensation creep into my smile. I find myself interested in her choice of baby names, the size of her unborn child and her magical ideas for a baby shower. By August she will be a new person and she’ll have a new little person to match her new life too.

While she talks I realise I’ve hardly spoken at all. I’ve kept all my thoughts to myself. Maddie is just beaming.

Will she remember me when she is so tied up with this new little person?

I know deep down I wouldn’t be able to do what Maddie is doing. She’s so strong and determined to give her unborn child the best.

As I look at my other friends, I know that if any one of them was to fall into Maddie’s situation they wouldn’t be nearly as positive and able as she is.

I have to accept that Maddie’s nurturing intuition will get her through. I’ve always known she would be an awesome mother, I just didn’t think it would happen yet.

Maddie, it’s out of my control. But I promise I’ll be more accepting of your decisions because I know you’ve been there for me when life gets rough.

I love you and I’ll try my very best to love who you’ve become.

If you like this article, please share it! Your clicks keep us alive!
Tags
unplanned
pregnancy
Stigma
young parents
breakups
feminism
choice