She Is All Around Me: The Story Of My Granny, My SHEro 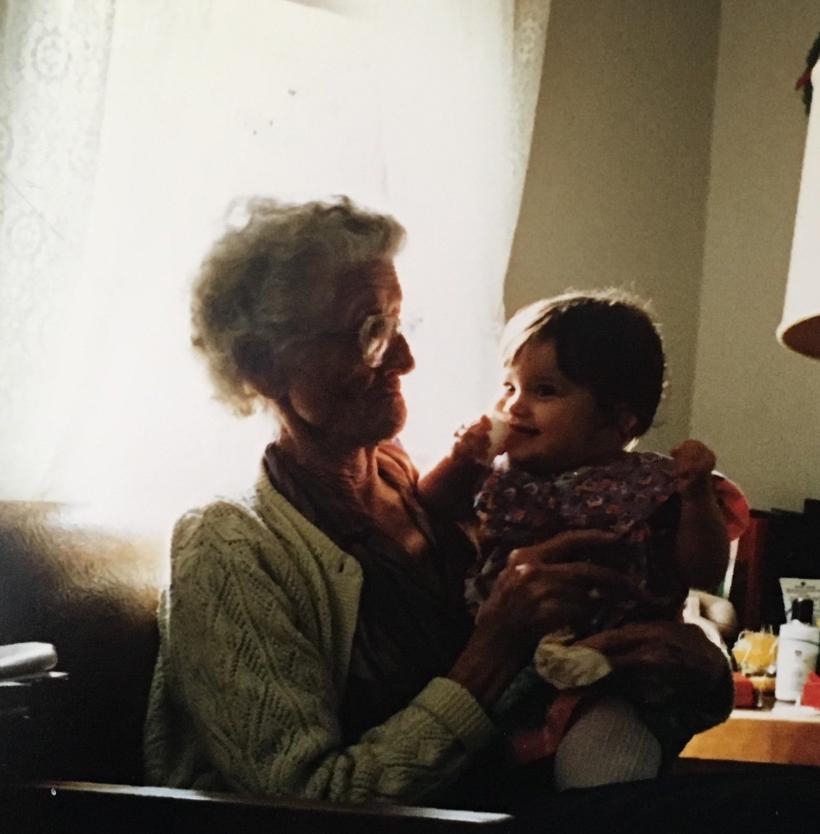 My heart was broken. I could not imagine life without her in it.

I fell and wept. I wept until I had nothing left.

The day before she died, I took her to lunch. She ate half a sandwich. I put the other half in her fridge, Styrofoam among a sea of used margarine containers filled with leftovers. The half-and-half in the back was well past expired. Half-and-half in her coffee, in her cereal, straight from the container: She only drank half-and-half.

I grabbed her a quart from the store she always walked to, run by three generations of a Japanese family who called me Snow White. I delivered the half-and-half, and she shoved a $20 in my face, yelling at me when I ran away without taking it. “You don’t even listen pretty good!”

The morning after she yelled at me because I wouldn't take the $20 for the half-and-half I bought, she was dead.

She died raking leaves, or so we presume. When her daughter, my grandmother, went to check on her that morning, she found her rake lying by the house, an incomplete pile of leaves in the grass — something Granny would never have done.

Her body was behind the front door.

She would be pissed if she heard me say the word “fucking.”

When I had chicken pox, she distributed calamine lotion liberally. When I had pneumonia, she administered the antibiotics, the chalky pink liquid, every six hours. When I fell off my bike, she bandaged my knee. When I had my first broken heart, it was her that said, “You don't need no man. Anything a man can do, you can do, and better.”

She crushed aspirin in orange juice for my fevers. She recited parts of the Bible — the Lord’s Prayer, John 3:16, Proverbs 6:6 — having me repeat each word until I knew them all.

I still know them.

She came to California from Oklahoma, Grapes of Wrath-style, picking cotton to feed her family, mending clothes. She could shell a walnut in 15 seconds and make a pot of beans last a week. Frugality was in her blood, the Great Depression all around her. She was constructed of steel.

It was from her that I learned to properly store drinking glasses. The Dust Bowl from which she ultimately fled rained so much dirt down on her kitchen that the only way to keep the dishes clean was to store them upside down.

Did you ever think about why people store drinking glasses upside down?

It was my mother who told me she had died. Ironic, because Granny helped raise my mother too.

When my mother called me, she was crying, but I did not expect the news that she delivered.

I fell and wept. I wept until I had nothing left. I felt as if her passing left me with nothing.

Her funeral was four days later. We sang “Amazing Grace” and “The Old Rugged Cross,” two songs I can still sing from memory because of her.

It was open-casket; I had never seen a dead person before. Would she look like Granny? Wrinkled hands; fingers curled by the rheumatoid arthritis that stole her dexterity; the softest face, etched deep with lines from years spent in the fields with a bonnet as her only protection from the sun.

She was dressed in her favorite blue pantsuit. I imagine she wore dresses in the fields, with babies on her back. My guess is, once she didn’t have to wear a dress, she stopped. Pants were more practical.

She was very practical.

The coffin was open, surrounded by mums (her favorite flower) that she wasn't there to see. She looked like her, only still: the same face, the one I’d kissed ten thousand times. The same hands, the ones who held me when I grieved the loss of my first daughter and when I brought my second one to meet her. The fingers that wove a million stitches.

I laid on her. Not all the way in the coffin, but on her torso, my head against her now-quiet heart. The idea that she was dead, that my affection was futile, didn’t occur to me.

My heart was broken. I could not imagine life without her in it.

The cemetery where her body rests, in between my great-grandfather and her daughter — my great-aunt — is a few miles from my house. I go to her when I need advice, even though I know what lies under the layers of Bermuda grass and soil is not her.

I cry to her, to help me, to hold me; and she is there, in the particles around, the grass, the stone, the faded silk flowers.

If you like this article, please share it! Your clicks keep us alive!
Tags
SHEro
grandmother
family
lessons