Why This Dad Has Given Up Being A Hero 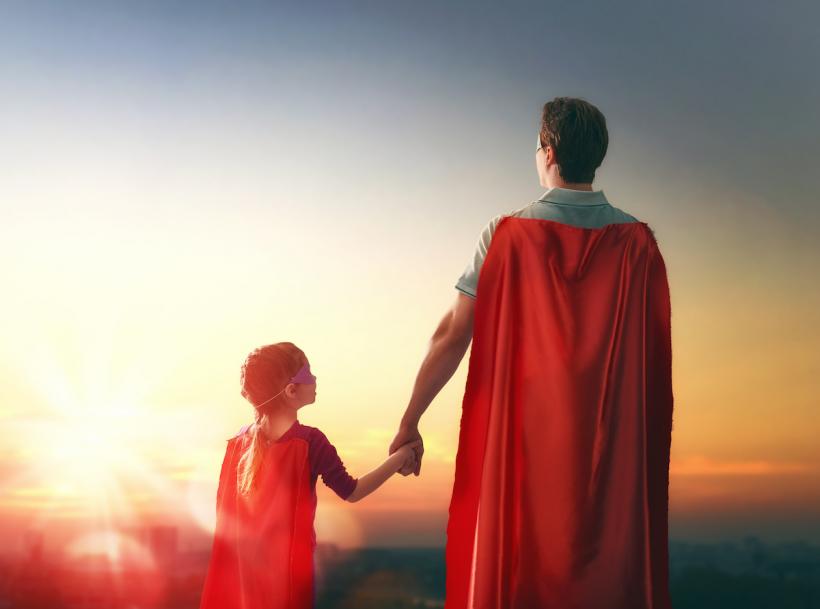 My kids didn’t need a warden. They needed a father.

When I’m passionate, I become either a perfectionist or a control freak. It depends on my stress level. That part of me can be a strength or a weakness.

It was a strength when my wife Amanda and I were dating. I wanted to dazzle her. I wanted to give her the best of everything, like when I sent her a box of her favorite things (movies, gum, jelly beans, you name it) for Valentine’s Day. I wanted to be her hero.

I maintained that mindset when we were planning our wedding. I wanted to give her the wedding of her dreams. I wouldn’t allow her to settle on any aspect of the experience, to the point I scoured the Internet for days to track down a few rolls of discontinued ribbon from a supplier states away so we could finish our handmade invitations.

My approach to fatherhood was no different. Every chance I got, I would try to attend to the children’s needs, while making things as easy on Amanda as I could. I tried to be the first one up if a child cried in the middle of the night. I washed dishes after supper. I rushed in to settle disputes with the kids. I would even cook, shop, and do laundry if I thought Amanda was struggling.

That was when my strength became a weakness and the control freak took over.

As I kept pressure on myself to be the ultimate husband and father, my definition of perfection narrowed to “my way.” Proverbs 16:25 says, “There is a way that seemeth right unto a man, but the end thereof are the ways of death.” That was me. I had created a rock so heavy I couldn’t lift it, and my family suffered.

When your kids are very young, controlling them is easy because they can’t do much on their own. When they become mobile and begin thinking for themselves, it gets much harder. As my kids grew into pre-schoolers and their personalities developed, I found myself escalating every act of disobedience into a battle of wills. Leaving their grandparents’ houses wasn’t pretty and usually involved lots of crying. I would also get frustrated with their constant needs, because it always seemed like they wanted something at the precise moment I got settled, like when I was trying to eat or talk with Amanda.

My control issues with Amanda were more subtle. Even when we were dating, I felt inferior to her. She’s insightful, perceptive, thoughtful, quick-witted, and very “together” in general. She’s everything I’m not, and I put her on a pedestal. As a result, I deferred to her for decisions and walked on eggshells to prevent displeasing her. The self-inflicted stress of being passive soon gave way to passive-aggressive behavior, and I began treating her as though she were incapable of raising our children and keeping up with housework.

I didn’t realize it, but my “perfectionism” was a mask for insecurity.

For about two years, our home life was defined by a cycle of irritability. I would get annoyed by the kids and overreact, Amanda would get upset with me for being too harsh, I would argue with her in my head because I was too afraid to say what I was thinking, and things would eventually calm down until the next episode. And then three years ago something marvelous happened: I lost my job.

I had been working on a major project, and my handling of it was a microcosm of my life. I had a specific vision for the project, and I didn’t seek any input despite being in over my head. I would micromanage details and ignore larger issues. I was disorganized and frantic. The project was a success, but I was fried. After two months of struggling to recover, I was let go. That project was the hill I chose to die on, and I’m glad I did. I needed to fail.

Now I’ve come to a place where I can let life happen. I see that my kids learn more from making mistakes than from lectures about consequences, and that every minor offense doesn’t call for swift correction.

Failing taught me two things. First, I trusted myself too much and others not enough. Second, when my fragile sense of self was threatened, I got defensive. Those two realizations were worth the price of admission because they liberated me.

Failing at work gave me a second chance to succeed at home. As I fought to retain my hard-won lessons, I became more aware of my behavior. I realized I kept making the same mistakes. Through prayer, God began showing me my faults. Among other things, I came to recognize I was callous and unwilling to communicate. As I shared this epiphany with Amanda, she began laughing and saying, “Yes! Yes!” I realized her prayers were being answered. Listening to God taught me to listen to my family.

I’ve never been a listener. For most of my life, it’s like a one-way mirror has separated me from everybody else. I knew there were people on the other side, but mainly I saw my own reflection. Figuring out how to see and hear them required too much work. Subtext was lost on me, and forget about any genuine insight. Getting through to me took the equivalent of tying a note to a brick and smashing the glass.

My family needed to know they were worth the effort to lean in, cup my hands around my eyes, pay attention, and do my best to understand them.

Once I started listening, I began to hear the cries for help I had been missing. Like when Amanda would cut the grass in the Alabama heat, as I washed dishes and watched her through the kitchen window. Or when she would tell me that it’s like I was two different people, one with her and one with the kids. Or when my oldest son Jaiden drew me a picture of a robot and wrote on it, “You’re awesome when you’re not grumpy.”

I could feel myself starting to loosen up. I was no longer afraid to share thoughts and plans with Amanda for fear of being rejected. I learned to take criticism without feeling attacked. I started making a point not to reactively tell my kids “No” on everything.

Now I’ve come to a place where I can let life happen. I see that my kids learn more from making mistakes than from lectures about consequences, and that every minor offense doesn’t call for swift correction. I’ve found that Amanda appreciates it more when I do yardwork and home maintenance than when I do dishes and laundry. Most of all, I’m figuring out how to recognize when I’m needed and when I’m not.

Every time I fail on this journey, I push myself to come back stronger. Life is so much better now as a result. I truly enjoy my children, and I love getting to know the people they are becoming. Since the environment is less combative, they are more comfortable confiding in me and asking questions without fear of instant disapproval. I’m regaining Amanda’s trust, and we’re getting stronger. She has newfound security because she doesn’t feel like she has to protect the kids against my mood swings. My family is teaching me to embrace the messiness of life as part of growth, and it’s beautiful. I get that life is a process, not a performance.

I also have a new appreciation for Amanda. I see her not as a goddess, but as a human being. I recognize that I have strengths that complement her weaknesses, like trying new things, planning, and consistency. That’s why we have each other. To paraphrase Jesus, when a man and woman get married they become one. I understand now that’s what perfection is. It’s not about being the best or being right. Perfection is completion. I have nothing to prove to the people who love me. I need them, and they need me.

If you like this article, please share it! Your clicks keep us alive!
Tags
parenting
the good men project
marriage
parenting lessons
life lessons
Perfectionism

Why This Dad Has Given Up Being A Hero
Jason Williams