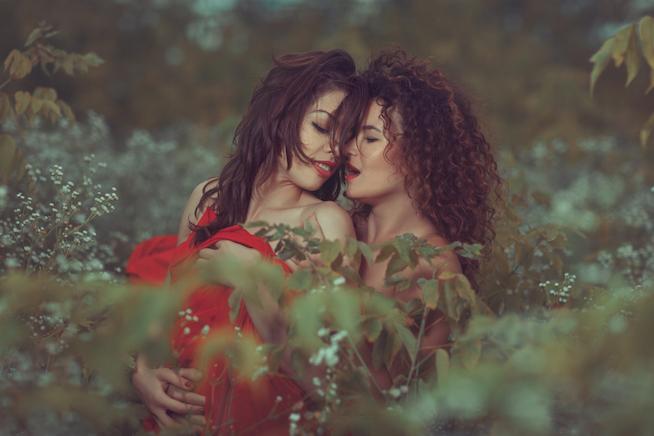 Breaking norms and trying to create something newer — and better — is going to feel strange.

At the end of the day, it’s important to remember that we do live in a culture that promotes unhealthy relationships.

In general, I don't believe in compromising for love. I'm not interested in a relationship where I become less myself to make someone else happy.

It's not that I want it all — it's that I know that both my partner and I deserve the most intense, unfaltering happiness and satisfaction we can bring each other.

That’s why I tell her exactly how I want her to kiss me.

It’s not something I do all the time. I believe in some surprise in romance (at least the good kind of surprise, anyway). But if I need something, I tell her. I don't want to leave her questioning, or to end up resenting her for giving me a deep kiss when I just want a little smooch. And, of course, I don't always tell her.

But when I need something specific, I ask. Because open communication is the key to a successful relationship — no matter how “strange” it is.

Sometimes when I talk to friends about how I handle my sex life, they’re baffled. They say it seems too blunt or straightforward. One of my friends got into her first relationship a few years ago, and she asked me how she could go about discussing sex with her boyfriend. Sometimes he seemed to expect it, not in a terribly aggressive way, but in that it’d become a habit: Every time he came over, they’d have sex.

I told her she should really just ask him point-blank if he expected them to have sex every time he went to her house.

I told her that if she wanted to challenge problematic relationship norms, it was going to be really important that she be willing to break the normative boundaries that really just exist to promote things like compulsory heterosexuality, masculine dominance, and the silencing of women. It sounds extreme, I know.

But think about it: What good comes from promoting radio silence within relationships — especially when it tends to be skewed in favor of the partner with more power?

So much of communication within relationships encourages two things: one, that you expect your partner to just somehow know what you want or need; and two, that you avoid hurting their feelings at all cost.

The first is problematic because there aren’t many mind readers out there. The second creates massive issues because rejecting your partner's sexual advances then feels like you're hurting them.

We see this over and over again, in romances in the media and in real life. I don’t even know how many times I’ve seen the scenario where one partner doesn’t want to have sex, and then, the other one begins questioning whether or not the first person is done with the relationship or cheating on them.

Of course, our society doesn't recognize that asexuality is A Thing, but we also don’t consider the really simple answer: that maybe, just maybe, that person isn’t in the mood for sex — and that they have the right not to be.

Without the room for a no, consent is a no-go. This is something I wish we talked about more.

At the end of the day, it’s important to remember that we do live in a culture that promotes unhealthy relationships. Whether from pop culture, romantic comedies, or everyday representation, these relationships — ones full of game-playing, jealousy, and lies — are the norm. Because they’re presented as the norm, we assume they’re healthy.

So, while it can seem (and sometimes is) awkward to call things as you see them and ask for what you need from your partner(s), it’s just a new normal. Breaking norms and trying to create something newer — and better — is going to feel strange. When I say, “I need a big kiss,” and then say, “Now a little one,” I know I’m doing something “weird.”

There are probably lots of people who would advise me not to go about my relationships like this. But it works for me, because I get what I need. Plus, it ensures that the trust is there so that my partner knows she can say what she needs. She can say, “No, not right now,” and I know it’s not a sign that something is horribly wrong. It’s just that she’s within her rights to reject my advances — and I, hers.

And there’s a fun and exciting flip side to this, too! If we want to try something new sexually, we’ve already created the foundation for open discussion: Do we both want to try it out? What are our boundaries for this act? Do we need to hit up the local sex shop?

While it may be punctuated by an abundance of giggles, it’s real and authentic, and it allows us room for open sexual expression that's comfortable for both of us.

So I tell my partners how I do and don’t want to be kissed, touched, and treated. And I create space for them to do the same.

There’s something about that level of openness that really just boosts the whole damn thing.

If you like this article, please share it! Your clicks keep us alive!
Tags
rape culture
Relationships
sex advice
LGBTQ
consent
norms