I'm Done Trying To Be The Perfect Fat Person 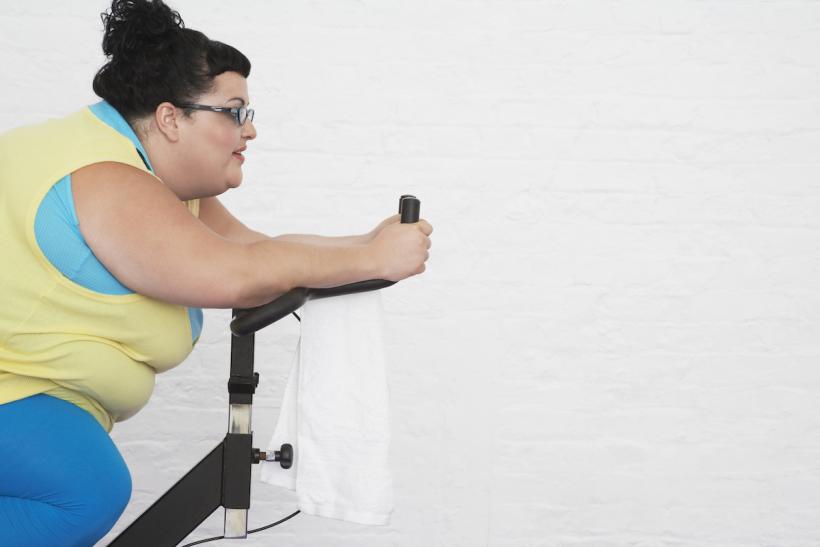 I imagine he was surprised that a woman of my size had kicked his ass in our (previously unbeknownst to me) competition.

Some of our happiest moments are those when we think that no one is watching: when we sing at the top of our lungs in our cars, or we dance down the frozen-food aisle of the supermarket allowing ourselves the freedom to let our inner child out. However, when you’re fat and the fat person’s representative, you don’t get any of those times of abandon because you’re always trying to lead by example and show that you’re the perfect fat person.

As this self-appointed rep, my goal is to show all the fatphobic folks that fat people aren’t the lazy, sloppy, gluttonous slobs you think we are.

I promise to get so consumed by what I believe society will tolerate from a fat person that I’m going to ignore what I need to do to live my best life and I’m going to put impossible restrictions on myself.

Recently, I was riding the stationary bike at the gym, when an old man I’d never seen or spoken to before started talking to me. I’m polite (well, when you’re representing people who are fat-shamed and made fun of, you have to be). I took my earphones out to hear him say, “You’ve clearly outridden me.” I didn’t know that there was a competition going on but of course there was. I imagine he was surprised that a woman of my size had kicked his ass in our (previously unbeknownst to me) competition. I smiled, laughed, and put my earphones back in, knowing that I now had evidence that people are watching me, and that in our who-can-ride-the-bike-longer competition, I won.

The downside of our imaginary Olympic event is that I now felt compelled to do even more than usual. I’m human, and by the time I’d ridden ten minutes longer than I normally would, I was exhausted and sweating profusely. Also, I injured my knee, which would prevent me from riding the bike again for two weeks. But when you’re the diplomat of Fatlandia, you’ve got to represent in every which way you can and wherever you can.

My knees were starting to buckle, my breathing was labored, and I was just plain exhausted. It no longer mattered that I was the representative of fat people, I couldn’t go on. I needed to stop, rest, and replenish. Instead of continuing to push myself, I had to quit and go home.

It’s a well-known fact that the natural habitat for overweight people is an all-you-can-eat buffet. When I used to go to big girl dances, they’d stop everything at 10:00 p.m. for a buffet dinner, which usually included a large ham. Now, I will tell everyone who’ll listen about how much I hate buffets — unless they’re fancy Las Vegas buffets. I have never been to a Home Town Buffet and, while I’m sure they’re very good, I’ve found that most of the time all-you-can-eat translates to a bunch of food you don’t want to eat.

I do, however, enjoy a good salad bar, as greens are the one thing that overweight people have been approved to eat. As the perfect fat person, I can’t allow myself to go wild at the salad bar (I’m unsure what this would look like, maybe tossing croutons into the air and catching them open-mouthed). It doesn’t matter if I’m incredibly hungry — I won’t go back for seconds on the broccoli slaw, and I really like broccoli slaw. But I don’t want to be taking more than my fair share, and I know that if the public sees me eat a ton (aka a medium sized portion) of food, it will cause them distress — and people must never be made uncomfortable by my eating habits. If I’m going to go for seconds, I’ll do it in the privacy of my home.

Some of the most challenging times to be the Ambassador of Size comes when one is traveling by plane. First off, I try to make myself as small as I possibly can get. You know those plastic vacuum bags one uses to store sweaters in? I try to concentrate my mass ratio into as tiny space as I can. Unfortunately, I can’t suck all the air out of myself the way the bags do, though I try to hold my breath at regular intervals. I want those people, who shudder when they see a fat person coming down the aisle towards them, to see that I’m a good fat person and would never take more than my allotted space.

How much is my allotted space anyway?

Then there’s an unspoken list of things I, as a woman of size shouldn’t wear — meaning anything that shows too much (read: any) skin, or anything that outlines a body part. Luckily, “To hell with sleeves,” has never been my motto and I’ve been able to obey the clothing rules — that is until leggings were deemed by middle America as okay to wear.

Sorry not sorry, but I love me some leggings. I love leggings so much that my first act of defiance came when I started to wear leggings whenever I wanted. Yep, sometimes with a tasteful tunic over them, but other times with a more fitted shirt.

The rebellion had started, I just didn’t know it.

I take five one-hour water exercise classes (including a water Zumba class) a week and, some days I do two in a row. And I’m still overweight. Throughout these classes, the teachers all say to adjust everything to your ability, which as the perfect fat representative, I interpret to mean, “Go as fast and hard as somebody who is in remarkably good shape.” Since it’s up to me to prove that fat people can do anything thin people can do, I don’t adjust it. If there’s a choice, I’m going for the most difficult version.

It was during the second of two classes in a row that I finally was forced to pay attention to my body. My knees were starting to buckle, my breathing was labored, and I was just plain exhausted. It no longer mattered that I was the representative of fat people, I couldn’t go on. I needed to stop, rest, and replenish. Instead of continuing to push myself, I had to quit and go home.

I realized that I’m tired of trying to prove to people and myself that I’m a perfect fat person. Who was I to judge what perfect and imperfect were anyway? Are disabled people or those who have health issues flawed because they can’t exercise or because they dare not to care what other people think of them? No, everybody is doing the best they can, and no one should be judged for it.

It’s not my job to convert people into accepting overweight people for who they are; my job is to take care of myself and not harm others in the process.

I hereby resign as the Fat Person’s Representative and I will no longer give a damn about what I wear, how much space I use, and if I work out as hard as I can. I accept that I’m imperfect and a mess, and that sometimes I’m going to feel compelled to wear something sleeveless when I go back to the salad bar for another serving of broccoli slaw. Sure, not everybody’s going to like me as the imperfect fat person, but I will, and that’s all that matters.