Take The Cake: Dating While Fat Shouldn’t Be This Weird 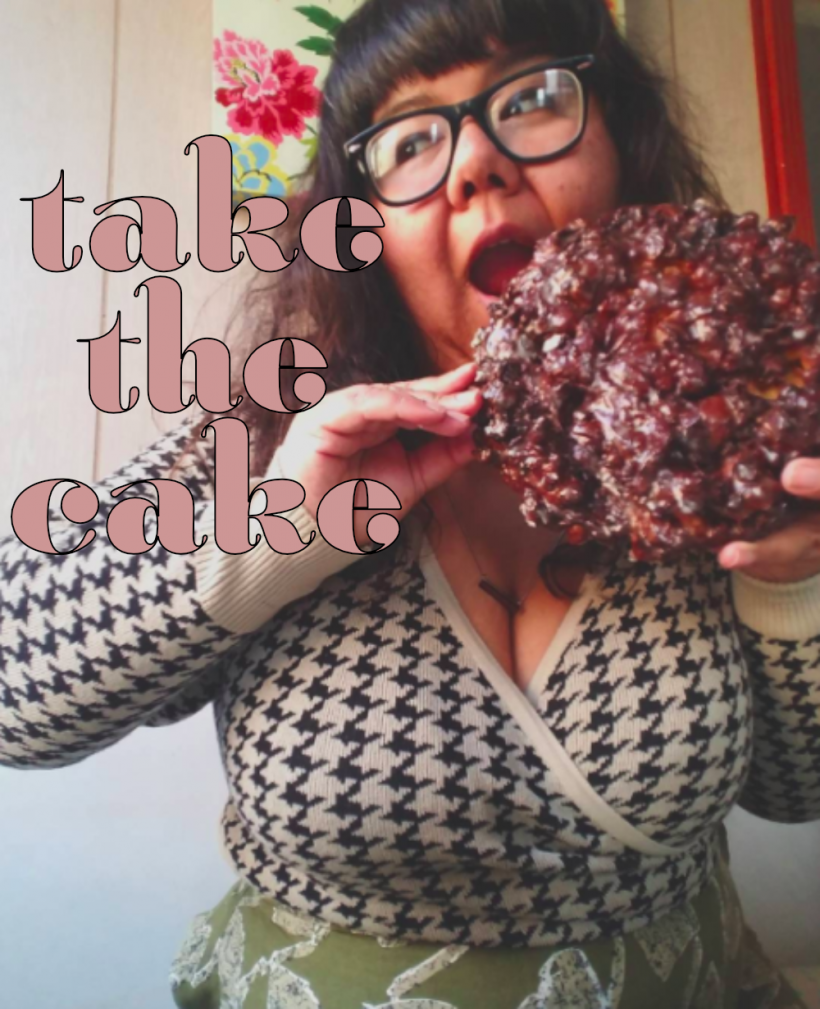 @virgietovar on IG: "Someone who was trying to woo me gave me this ginormous apple fritter today and I was like YES I HAVE FINALLY GOTTEN GOOD AT TELEPATHICALLY CONVEYING WHAT I EXPECT FROM MEN."

Earlier tonight I was perusing the racks of Goodwill while chatting with my friend Isabel over the phone. As I found a vintage inspired fit-and-flare dress covered in pink elephants, we began discussing our respective dating histories.

I was telling her about how weird it has always been when I first start dating someone. It is always hard to negotiate the public component. I already feel super visible because I’m a fat woman wearing neon most likely, which I’ll admit I’m kinda into. But add a dude to the equation and all of a sudden I feel like people’s eyeballs are a moon orbiting the planet on which our initial fumbling exchanges are taking place. High pressure.

It is so taboo for fat women to be sexually and romantically active. Period.

It feels like people are rooting against anything that even vaguely resembles thriving because, hey, fat women are supposed to be examples of what happens when you don’t follow the patriarchy rules. When we step outside our prescribed role, we threaten all the things.

I feel like the sex lives of fat ladies have been relegated to some underground sphere. Fat romance has little space in popular culture beyond the punchline. The idea of being a fat person who is happily dating in public creates really strong feelings in people.

I feel less and less shame about my body as I continue to heal from a near-lifetime of body dysmorphia, but I know that having my body in a fatphobic culture bears a steep price, and the happier I seem the more threatening I am.

I told Isabel about the time that a woman came up to me and my amazing, fat-positive then-boyfriend as we were exiting the train station in downtown San Francisco. She locked eyes with me. She was wearing a huge grin, like she was about to hand me the biggest and shiniest present I had ever seen in my life. And then she actually handed me the metaphorical equivalent of a poop sandwich: “Whatever you’re doing to keep him, you keep doing it.” Then she walked away, her head high and her chest swollen with the pride of a person who just oppressed you while thinking she was doing you a favor.

What she thought she saw was an unworthy fat lady who worked her big ass off to entrap and manage to keep a superior thin man by her side. What she didn’t know was how hard he had actually worked to become my boyfriend, even traveling about 7000 miles by plane just to be holding my hand on that very afternoon. He had wooed me from across the planet and thought I was the most beautiful girl alive. Unfortunately, interacting with him in public never stopped being an emotional challenge for me.

I thought about another time I had spent about 27 hours making sweet love to this commercial crab fisherman who was a total burly babe-man with a Prince Albert. After our night of passion, he asked if he could accompany me on my commute to work. As we sat together holding hands, a woman sitting in front of us could not stop looking back at us, checking me and him over and over, snooping for any clues that would help elucidate the details of our entanglement so she could rationalize our coupling.

I often find myself internally negotiating whether it’s even worth it to try to get to know someone by going out on dates, just knowing that I will have to navigate all the scary things that are just part of dating someone new in addition to people gawking and body checking us, tabulating my worth compared to his or vice versa, making sure we don’t threaten anybody’s worldview too much.

I have in the past opted into casual, sexual relationships because I couldn’t handle the idea of going through all that one more time. It scares me that I still have thoughts like that, but the truth is these thoughts are not my fault. These thoughts are evidence of how potent fatphobia truly is, especially in a place like San Francisco. I feel less and less shame about my body as I continue to heal from a near-lifetime of body dysmorphia, but I know that having my body in a fatphobic culture bears a steep price, and the happier I seem the more threatening I am.

Being fat, above all other things, has had the greatest impact on how, why and when I date.

I don’t know exactly how to feel about that. In many ways, I have been culturally forced to MacGyver my way into hearts and pants. I have not always loved this, but I can’t say I have always hated it either. As with most things, it’s complicated. But I do know one thing for sure: dating while fat shouldn’t be this fucken weird. Get it together, society!

If you like this article, please share it! Your clicks keep us alive!
Tags
take the cake
Virgie Tovar
fat
dating
bodies
body image