Bachelor Review: Giving Nick A Chance - Do We Even Want To? 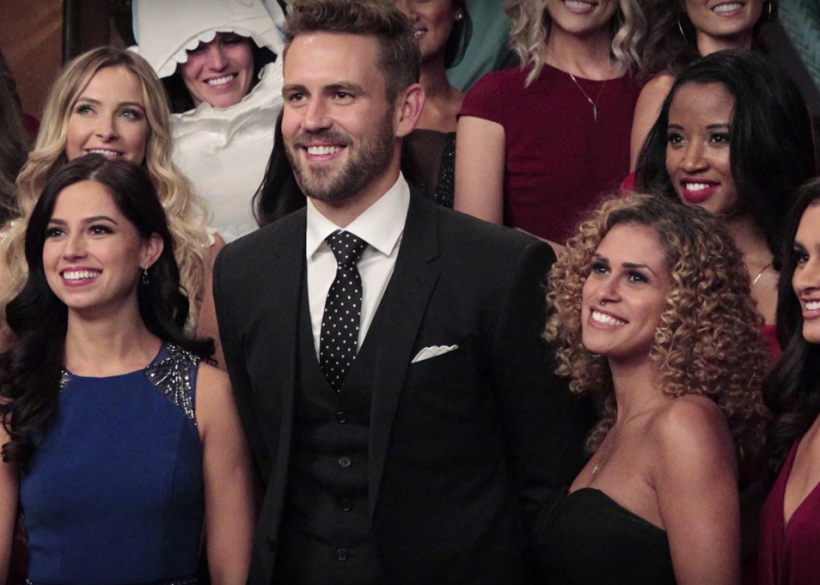 Editor's Note: Ravishly is starting a weekly series of Bachelor reviews, authored from the thoughtful, witty, feminist perspective of Dr. Molly Pennington. It's your intellectual (but still amusing) pop culture deep dive after everyone's favorite Monday night frolic in the shallow end. (Future posts will be published on Tuesdays.)

"Just give him a chance."

We've been hearing that a lot these days. It's the kind of phrase your conservative aunt tosses out about the president-elect. A man who shares Nick's penchant for awkwardacity and rule-breaking and saying things that make you cringe.

The Bachelor seduces us because of its titillating alignment with larger American culture. We wouldn't have predicted we'd find anything meaningful in reality television and yet, now that a reality star is set to helm the country, we know we must've missed some bigger connection somewhere along the way.

Conclusion: Reality TV Is Way More Influential Than You Think.

Even better, imagine a world where Chris Harrison could intervene. Pull politicians aside for a heart-to-heart in a room lit with votives.

"How are you feeling right now?" He could ask it in that deadpan way of his that barely conceals mocking. Imagine Trump, Comey and all the rest of them coming over to the "Hot Seat." Chris asks us to all "take a look" at a compilation of their bloopers.

Reality Television (a young genre in the grand scheme) seemed to gain power by flying under the radar. By convincing everyone it was total garbage. Then, come to find out, that was its very power. The way it confused all notions about what the real world actually was.

When current contestant Christen (already a fan favorite) remarked that things had dipped into "absolute reality," we knew two things for sure. First, that reality was no longer stable. And second, that marketing people should stamp that phrase onto top shelf vodka. Absolut Reality: Drink every time Nick says or has sex.

The History of Hate-Watching Nick: Background On the Current Bachelor

Nick Viall is a three-tour vet of the popular franchise, back for the 4th time, presumably for the elusive "right reasons," which purportedly relate to marriage. The "right reasons" do not include grabbing pussies — or, in Nick's case, groping "Buh-OOBs," as Corinne pronounces the term when speaking about her own. (More on Corinne later.)

The Bach Nation first turned against Nick during his fabled After the Rose with Andi.

After making it to the "final two," Nick had prepared to propose to Season 10 bachelorette, Andi Dorfman. But she didn't pick him. She chose Josh. So Nick felt he had no choice but to confront her on national television with his emotional need for closure.

Nick freaked out everybody (most dramatically Andi) when he uttered, "If you're not in love with me, I'm not sure why you MADE LOVE with me."

The audience had been happy to play along with the mystique around the goings-on in the legendary fantasy suites, the fabled overnight dates offered to the three final bachelor(ette)s. As if we were living in Victorian times or some wormhole where sex probably happened because births did, but otherwise, who knows?

Worse still was the cringe-factor in his phrasing: "made love." As if it was your parents or some lame sex scene where you couldn't see anything from the waist down.

But Nick's worst offense was putting Andi on the spot with his dumb and dangerous notion that women should save sex, if not for marriage, then at least for love.

Nick blew all the Bach Nation conceits to smithereens with one little whine.

Yet, the moment of his demise was also the moment when he sunk his hooks into us. When he proved he would say anything. He would make everything an awkwardpocolypse. Then remove his pants and sink further.

We all ignore it when Chris Harrison, satire expert, swoops in and announces, "There are no rules." That's complete nonsense.

Nick gains both favor and ire by breaking rules. Much like that other outlier, the pres-elect.

Nick continued his fall when he crashed a group date on Kaitlyn's season and convinced her to buck protocol and "cast" him on the show. Nick was through with lovemaking — soon, they were having sex.

Kaitlyn's sexual freedom, like Andi's, got caught in the crossfire of a larger matter: The man-code debate between Shawn and Nick over the concept of "Eskimo Brothers," a phrase Nick detonated between them when Shawn seemed to expect it would remain unsaid. Eskimo Brothers — the term dudes use when they sleep with the same woman — insults quite a number of people, when you think about it. (Eskimos, women, and actual brothers making up a pretty substantial portion of humans.) In this day and age, I'm betting on a huge population of these types of brothers, maybe even cousins, or uncles. Because women can hook-up or not as they wish.

Specifically, Shawn, who offered a master class in Nick hatred.

Jealousy would coat Shawn's face in red perspiration. You could see the stress in the way he clutched his drinks, taking sips with barely contained rage, or what he defined as "love." Shawn tried to rationalize his unbounded fury toward Nick. Something about arrogance and self-promotion that he couldn't quite articulate.

But the real reason was just because Kaitlyn had sex with him.

The Relative World Of Worthiness: Bachelor In Paradise

If the regular Bachelor shows are emotional kin to boxing, then Bachelor in Paradise is a psychological cage fight. The franchise spin-off is basically a cross between Thunderdome and a modern Downton Abbey. Just add bikinis, a barrel of tequila, and humiliation grenades.

It was on this island that Nick's reputation began to rise. Not so much due to his own accomplishment, but because he stood in striking contrast to the toxic man-child Chad, the nerd deluxe known as Evan, and Nick's original nemesis, Angry Josh, a blustering beach Alpha who pulled Amanda around by her ponytail (metaphorically).

So Nick secured the coveted role of Bachelor. An unlikely hero.

This Season's Women – Why Can't We Be Friends?

1. The blonde Corinne is 24, topless and tragic.

Though her antics, drunkenness, and aggression spring not from her own soul, but the societal mess we collectively hand to women, her co-contestants still hate her.

We live in a world where young girls are told to pursue physical perfection in lieu of personality. Then we act surprised and get mean when women like Corinne fulfill that obligation.

She emerges quickly as the clear villianette. She claimed she'd be "cute in a topless outfit," and then proved it. Nick was there to oblige and fondle. As was Franco Lacosta, a loudly dressed photog who wears mirrored aviators while directing a faux bridal photo shoot (Group Date #1). At one point, he murmured that "I know you from before time" should be the thought they convey in their expression. Some women were consigned to be Bridesmaids, emphasis on "maids," so the jealousy set in.

Later, Nick gave the coveted group date rose to Corinne, who got wasted and then broke woman-code when she continually interrupted the mini-dates Nick had with the others.

Instead of recognizing Corinne as insecure and emotionally reeling, the women decide to hate her. And Nick. Who seems exposed as a man looking to grope and eyeball as many boobs as possible. Sure, those aren't supposed to be the right reasons; but they might be as good as any to Nick.

Liz pulls such a Nick move by getting cast on the show. She knew him in a past life where they had what she described as awkward sex. That the deed happened at Jade and Tanner's Bachelor wedding was just a part of the larger plot.

Liz is cruelly punished, as women are, for displaying the same traits or behaviors as men. The most common accusation thrown at Nick regards his self-interest in getting on television. Then, he accuses Liz of the same impulse.

(Why shouldn't she be on TV? In fact, why didn't anyone think to mic their post-wedding party hook-up?)

Liz's presence is somehow too realistic for Nick to handle. He can't meet her eyes.

The whole thing goes down at The Museum of Broken Relationships (Group Date #2). A real place. A location for performance art and artifacts — including Kaitlyn's Neil Lane diamonds, and finally, a dried out rose.

There is an almost Shakespearean level of irony to the proceedings. Liz pulls Nick way too close to "absolute reality," which is always tinged with stuff that's fake and also awkward.

Nick sends her home with brutal clarity. The crazy part is that Christen, Liz's confidante and friend, had a hand in it.

3. Alexis: Dolphin or Shark? — Cognitive Dissonance and Other Disasters

Alexis arrived at the Bachelor mansion dressed in a shark costume that she insisted was a dolphin. This move was the perfect rendition of our upside-down, post-fact world. Alexis plainly revealed the psychological gist of that other famous reality star, and also his supporters: That reality is totally fluid. Facts are as wistful as dreams. Only belief creates reality.

You couldn't really argue that she wasn't, in some way, an actual dolphin — because what is one, anyway, if one is cavorting poolside at the Bachelor mansion? By the end of Episode 2, the dolphin girl was celebrating the first birthday of her breast implants.

The women had already figured out the key to Nick's heart. That if you want a rose, you're going to have to take your shirt off.

That rule has probably been around since Season 1, but we're just now getting the nerve to say it aloud.

Will the Women Forgive Nick?

Perhaps they could band together, start a coup. March in protest. Insist on a better bachelor. Refuse every rose.

Or will they simply suck it up, fight each other, and compete for a guy who barely seems worthy?

Either way, Bach Nation is glued to the screen.

If you like this article, please share it! Your clicks keep us alive!
Tags
The Bachelor
#BachelorNation
Nick Viall
Corinne Bailey
DolphinShark