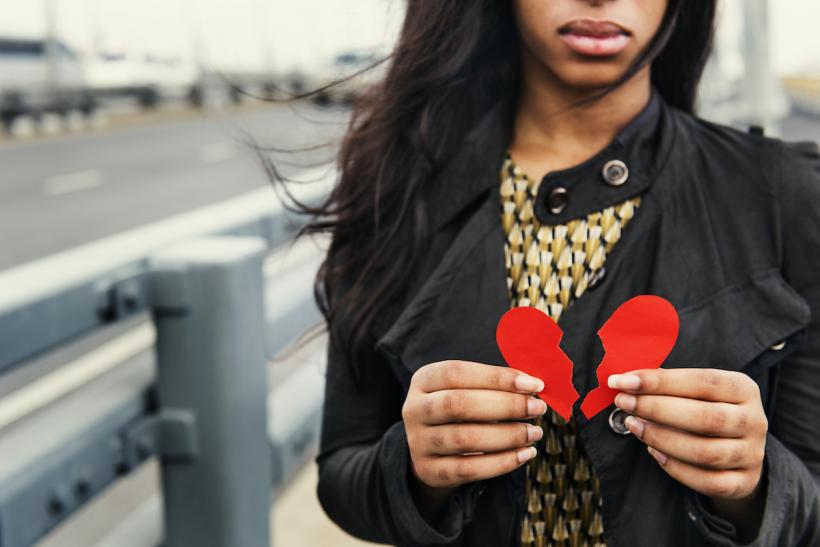 Few things in the world hurt more than losing someone that you love.

Few things in the world hurt more than losing someone that you love. Be it a breakup or something more permanent, the heart hurts similarly and often without reprieve. If you are reading this, it’s likely that you have experienced being broken up with or romantically rejected in some way and that you know the familiar, gnawing emptiness of heartbreak.

Not only have you experienced emotional pain, but there is the body’s physiological response to it, which manifests in actual physical pain.

When we experience rejection, it has been found that our heart rate drops significantly. That sinking feeling of “heartbreak” actually has a nearly universal physical process behind it — you’re not imagining things! A 2010 study published in the Journal of Neurophysiology found activity was triggered in the same part of the brain that also processes physical pain when participants were shown pictures of their exes. When you describe yourself as “hurting” emotionally, you are also hurting physically. It isn’t just your imagination, so don’t allow anyone to diminish your very real feelings.

In fact, researchers at Stony Brook University have found that the portion of the brain, which is engaged during the emotional chaos and pain of a breakup, is the same spot which is associated with motivation, reward, and addiction cravings. You know that cheesy 80’s song “Addicted To Love?” Well, he’s right— we may as well face the fact that we are, indeed, addicted to love. To clarify, brain imaging actually shows similarities between romantic rejection and craving cocaine.

“Rejection hurts so acutely because we get addicted to the relationship, only to have it taken away from us. And after, just like a drug addiction, we go through withdrawal,” says Adoree Durayappah, M.A.P.P., M.B.A.

There’s a reason for that — your hormones are all out of whack. In fact, different parts of your brain straight up deactivate. Breakups increase your likelihood of a heart attack, skin problems, and leg pain/mobility issues. You don't imagine these things; they’re actually there!

If the physiological response wasn’t weird enough for you, the sociological one might be. Breakups/divorce are socially contagious! Immediate friends and families of the couple that split are 75% more likely to break up, as well. Even the split of a friend-of-a-friend raises the likelihood of yours by a third! The findings come from a study of the town of Framingham, Massachusetts that has been on-going since 1948 which has viewed the patterns of over 12,000 people.

If you feel like you’re going through a personality crisis, it’s entirely normal. In fact, it’s likely that almost — if not all — of the things that you are experiencing are. Everyone experiences heartache and heartbreak at some point in their lives.

Here are five ways to help mend your broken heart.

1. Identify and own your feelings.

Whether it’s absolute sorrow, an intense rage, confusion, or a profound sense of betrayal, go with it — but don’t give into it. If that anger is saying “burn their house down and any bitch that’s in it” —obviously that is not something to give in to, but you could have a bonfire somewhere where you safely and soberly (or with the help of a sober bestie) get rid of all of the things that remind you of them. Better yet, you could have a fire ceremony in which you set your intentions for yourself and not worry about the path that they are taking, but we totally understand if you’re not there yet. Make time for the petty, but do not drown yourself in those emotions.

Do not contact your ex. Don’t text, don’t call, don’t write a letter, don’t show up at their door or places where you used to hang out. Do not try to hang out with their best friend to get the latest update on your ex. Do not Facebook stalk them to try to figure out if they are seeing anyone else. Cut that person out like a tumor until the hurt has subsided and you are not desperately trying to reunite. Only then can you assess whether or not there is a friendship to salvage and put an honest effort into building that portion of the relationship. It may take months or years if it is possible at all. This part takes patience and a lot of intense boundary-setting.

It doesn’t matter if you are a great writer, just write your feelings out. Whether you are “the emotive type” or not, this MF broke your heart, and you have a lot of feelings about it. Even if it is a list of the things that you are experiencing, identifying and writing those feelings out is a healthy, cathartic process that helps you progress beyond feelings of confusion and pain. Writing about your feelings helps to return the ownership of the experience to you instead of just being a victim in a sea of someone else’s making.

If you were the one to have initiated the breakup, this is an excellent time to keep moving forward with progressive decisions and identifying what you want. If you did not initiate the breakup, this is still the time to do it, but it may take a little more time to figure out what you are experiencing. It hurts to be on either side and writing about it certainly helps to find much-needed clarity.

If writing isn’t your thing, perhaps other forms of art are. Some of the greatest songs ever written are breakup songs. Surely, some of the best visual art was inspired by them, too. Try to move past odes or portraits of the person who broke your heart and focus on the emotions themselves, rather than the person linked to them. Two of the easier ways to get creative and channel these emotions are to make a mixtape for yourself (and any other friends who may be going through the same heartbreak) and collaging an emotion. It may be easier said than done, but it’s a lot easier to hang onto and be empowered by art that is reflective of you, rather than just a recollection of the other person.

My gift to your broken heart is this great little YouTube breakup playlist that I made:

Almost all therapists will tell you to remain in the present. There’s a reason for this: there’s nothing you can do to change the past, but you have every bit of control over how you respond to what is happening to you in the present and what your next course of action will be.

When you start to feel your thoughts spiralling toward your now unrequited love or any other triggering thought for that matter (I use this for panic attacks), try to use these techniques:

Take very conscious breaths, being aware of breathing in and out. Remove your shoes and dig your feet into whatever surface you are standing upon, even if it’s just rubbing your feet on the carpet or wood floor. Is it hot or cold? Smooth or rough? Take a sip of water. Feel it roll around on your tongue and down your throat, moving into your stomach. Is there a breeze? Which direction is it going? Get yourself out of your head and into the physical elements of the present (which are tangible) and what is around you right now.

If you like this article, please share it! Your clicks keep us alive!
Tags
breakups
how to survive a breakup
breakup advice
heartbroken
heartbreak
self-care