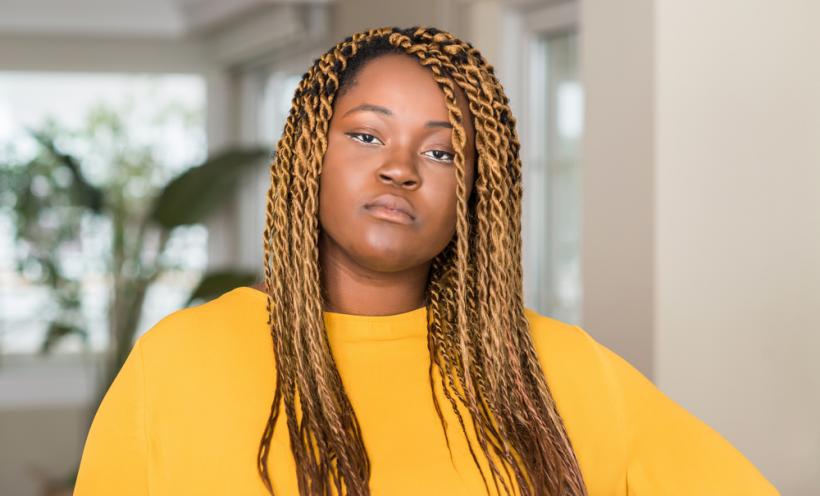 Here's how to apologize to a Black woman in ten easy steps.

Sometimes, I get angry. Sometimes, my voice gets louder as I feel the anger coursing through my veins.

As a Black woman, that anger can be viewed as threatening — even when it isn’t.

Being depicted as an Angry Black Woman is exhausting. I have seen so many depictions of what an “Angry Black Woman” looks like in the media, and I can’t take it anymore. I am not a caricature.

It is time to retire the “Angry Black Woman” trope and instead, wonder from where that trope came. Why is this woman so angry? Why is her race even mentioned? Think about that, but mostly, think about how the world treats Black women and their anger.

Maybe — just maybe — it isn’t the Black women who should issue an apology. Maybe it’s time that we apologize to them.

Don’t know how to go about it? Read on and learn how to apologize to a Black woman in ten easy steps.

Acknowledge the fact that before she even raised her voice or shook her finger in your direction, you have already perceived her as a caricature, rather than a full-fledged person. As her temper grows, your mind has wandered, and suddenly, she is the broom-welding Mammy Two-Shoes from Tom and Jerry or a character in a Tyler Perry film.

Take a moment here and think about why you see her that way. Why do you describe her as an “Angry Black Woman” rather than just an “Angry Woman"? It’s a racist line of thinking.

Note: I didn’t call you racist. Accept that those two sentences mean two different things and move on to the next step.

You may love Black women, but you may also be afraid of our strength. You may love the idea of us, but when confronted with our emotions and our passions, you may realize that you don’t know us at all. You like the spiciness of Black women, but a three-dimensional Black woman is where you draw the line. Why is that? What offends you so much about my right to be?

When you think of an “Angry Black Woman,” of whom do you think? Do you think of that scene from Waiting to Exhale in which Angela Bassett sets her cheating husband’s car and clothes on fire? Do you think of that video of Cardi B and Nicki Minaj fighting at New York Fashion Week? How about Serena Williams at the U.S. Open? That moment where she smashed her racket shocked all of us for different complexed reasons. For you, it might have been shocking because here she was, yelling and breaking things. This isn’t the Serena we are used to seeing. You thought that she was embarrassing herself, her family, her coach.

For me, it was shocking because finally, Serena was standing up for herself. After dealing with racism and sexism for her entire career, she stood up for herself. I was proud of her. You should be too. It takes a lot for a Black woman to risk everything to stand up for herself.

I need you to realize that we can’t discuss an “Angry Black Woman” without talking about a Strong Black Woman. Evette Dionne said it best. She writes, “referring to black women as 'strong' becomes a denial of our vulnerability because we’re expected to remain vigilant, unmoved and unemotional, even as the world violates us time and time again.” These two things are connected, even if you haven’t realized it.

A Strong Black Woman embodies so many roles — mother, homemaker, worker, etc., — and she must do it proudly even when she feels as though her bones are snapping from the weight of the world. When a Strong Black Woman has had enough, or when she finally snaps because she’s exhausted, she is then labeled an Angry Black Woman. She is labeled that because her anger is no longer appealing. Her anger doesn’t make you desire her anymore. Why? What is it about her anger that terrifies you?

Take a moment to breathe. You are used to being congratulated on doing the bare minimum but not today. Today, you will be silent, and you will listen.

A White man’s anger is thought of as passionate. It can also be terrifying, depending on the context, but let’s go back to that first viewpoint. I want you to sit there and wonder why, when your black female coworker raises her voice (which you have to understand is fairly rare because she knows that she can’t overstep her boundaries unless it’s truly needed), you raise your eyebrows out of shock, but when your white male coworker yells at a client over the phone or puts a fist through the wall of his condo, he gets a handshake from his boss and win Employee of the Month because he's “passionate and gets the job done.”

Are you tired of learning? Good. You must realize that until every single Black woman is cold in the ground, these lessons will continue to be passed down from generation to generation. Whether she is the most nominated woman in the history of the Grammys, or the first Black woman elected to the United States Congress, or the holder of the most Grand Slam titles in singles, doubles, and mixed doubles combined among all active players, there will always be someone trying to undermine her worth. Today, that someone is you.

Go to your local library and check out Sister Outsider by Audre Lorde, Women, Race and Class by Angela Y. Davis, and On Intersectionality: Essential Writings by Kimberlé Williams Crenshaw.

Realize that Part One of your lesson is over. This is a lesson that you’ll have to continue learning and remembering for the rest of your life. So will she. So, do me a favor, and look her straight in the eyes and begin. She has been waiting for this apology all her life.

If you like this article, please share it! Your clicks keep us alive!
Tags
black woman
black lives matter
Apologize
racism

How To Apologize To An Angry Black Woman​
Katherine D. Morgan