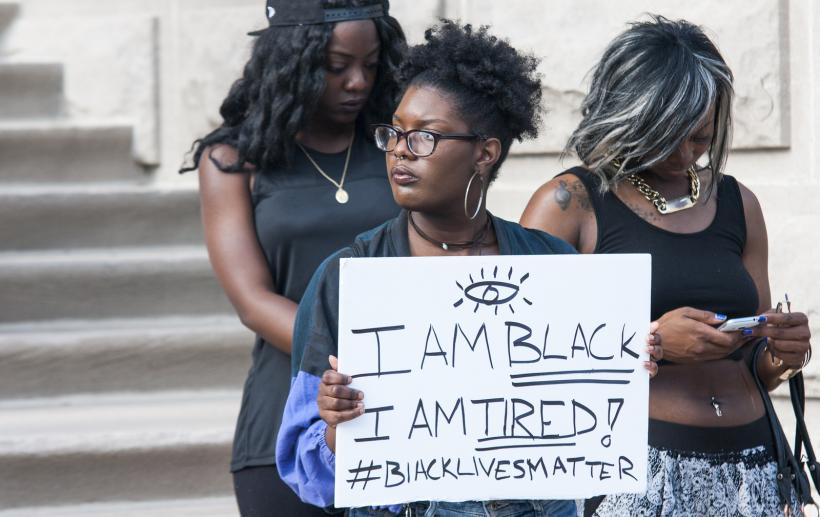 “People are still dying, still being killed, don’t tell us to sit down and not continue to go out into the streets.”

From Atlanta to Baton Rouge, protesters continue to take to the streets.

“We don’t have the same rights as our white counterparts,” 17-year-old Myra Richardson, a student at Baton Rouge Magnet High School, told AlterNet over the phone. “There are still things holding us back. How can we call America the land of the free?”

Richardson is one of countless young people who took to the streets from Miami to New York to Minneapolis over the weekend to rally under the banner of Black Lives Matter, braving heavily armed police deployments and a charged political environment in which they are being demonized for exercising their right to protest.

For Richardson the cause is personal, as Alton Sterling was a known member of the community—and the Triple S Food Mart where he was shot to death by police a popular spot.

“The youth have lived through so many atrocities, but we're still optimistic, still trying to do work,” said Richardson, who is a member of a community organization called #thewave and said that she speaks on behalf of fellow classmates: Raheejah flowers, 15 and Jeanette Jackson, 15. “There have been marches and gatherings all over Baton Rouge. We've seen groups from all over the United States come down. We have all these things stacked against us, but there are still people mobilizing and trying.”

Richardson is part of a generation of young people who have grown up seeing images of Black and Brown youth who look like them shot and killed by police. Police killings of Black people in 2015 outnumbered lynchings of African-Americans during the worst year of Jim Crow, according to Quartz reporter Annalisa Merelli. During that year, 1,146 people were killed by police, the Guardian reports, in what is likely a conservative estimate due to the underreporting of police killings.

The fact that police killings are calculated by media organizations at all is a victory of the sustained protests of the Black Lives Matter movement. Yet, despite heightened visibility, the killings continue. According to the Guardian, 571 people have been killed by police so far in 2016—3.4 per million Native American and 3.28 Black. The Washington Post put this number at 512.

These numbers were made painfully real with the back-to-back police killings of African-American men Sterling and Philando Castile.

In light of this reality, campaigners say that now is an important time to mobilize. “Guided by love, we continue to stand together for justice, human dignity and our shared goal of ending all forms of state violence against Black people,” declared the Movement for Black Lives in a widely-circulating pledge. “We organize, occupy, demonstrate, march and chant for a new future: A future we can be proud of. We stand on the shoulders of our ancestors, who fought for their freedom and ours. Like them, we want a world where our lives matter.”

“For Black folks in particular, we have a mandate: to avenge the sufferings of our ancestors, earn the respect of future generations and be transformed in the service of the work.”

Yet, in the aftermath of the Dallas shooting, protesters face an escalated crackdown, despite the fact that there are no proven ties between the gunman and the Black Lives Matter protesters. “Black activists have raised the call for an end to violence, not an escalation of it,” the Black Lives Matter network said in a statement released July 8. “To assign the actions of one person to an entire movement is dangerous and irresponsible. We continue our efforts to bring about a better world for all of us.”

Aesha Rasheed, a New Orleans resident and organizer with Southerners On New Ground, traveled to Baton Rouge over the weekend to join the protests. “In this moment, not only have we lost someone to police violence in such a wrong way, but we also are in position where they have made protesting illegal,” said Rasheed, referring to a controversial Louisiana “Blue Lives Matter” bill that will go into effect starting August first.

“I was at the protest on the capitol steps and the youth from Baton Rouge were there telling their stories, making their demands about the change they want to see,” said Rasheed. “People are still dying, still being killed, don’t tell us to sit down and not continue to go out into the streets.”

Under the guise of “public safety” police departments across the country have used the Dallas shootings to call for increased police militarization and surveillance nationwide. “This will cause complaints about violating people's constitutional rights to free assembly, but it is the only way to guarantee safety,” Thomas Manger, president of the Major Cities Chiefs Association, told Reuters.

According to Mary Hooks, co-director of Southerners on New Ground and organizer with Black Lives Matter-ATL, “This is a moment to organize and challenge the conversation about what is public safety and who is defining it. We have to redefine it because it's not the folks whose neighborhoods are being occupied having a say, instead it’s being defined by more police, more surveillance, more probation, being funneled into the municipal court system. ‘Public safety’ feels like booby traps to us as Black people. We pay a regressive tax with our time and our lives.”

“We want safety, dignity and justice,” Hooks told AlterNet. “For Black folks in particular, we have a mandate: to avenge the sufferings of our ancestors, earn the respect of future generations and be transformed in the service of the work. That is what we are in the streets for. We’re going to take as much time as we need.”

This article originally appeared at Alternet and has been republished with permission.