Can't Buy Me Love: Why I Stopped Waiting For Men To Buy Me Jewelry 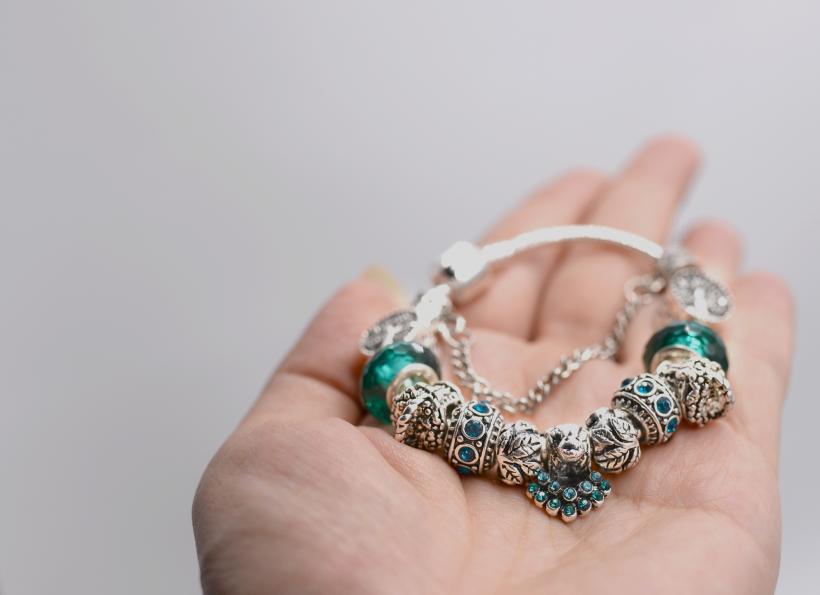 Until last year, I believed there was some unwritten rule preventing me from buying jewelry for myself.

My mom was the daughter of a neurosurgeon and a southern socialite. She always wanted the kind of life defined by propriety: the right manners, the right clothes, and the right jewelry. She married my dad when he was the manager of a photo lab, but by the time I was 14, he was selling real estate.

For a very brief moment in the early 2000s, when the economy was high on subprime loans and wishful thinking, we could afford the things my mother wanted, and so she asked for the engagement ring they never had money for before.

She dragged me to the Volusia Mall on a hot weekend in July of 2003. The mall’s jumping indoor fountains glinted with pennies and filled their atria with the astringent smell of chlorine. While we walked, I fell back from her, embarrassed to be seen with my mother, or anyone really who I felt didn’t fit this Abercrombie and Fitch persona I tried to cultivate in the 8th grade. We wandered from JCPenny’s to Dillard’s to Zales to Kay, and we leaned over glass cases of rings nestled in vanilla cream felt.

“The aquamarine,” she said, pointing.

“Would you like to try it on?” the salesman asked.

“On her,” my mom said with a nod to me. “I’m trying to lose weight. Hers should be about right.”

“Rings can be adjusted,” she said.

I rolled my eyes, pulled up my hip huggers, and offered out my hand. The salesman slid the ring on, and I spread my fingers wide, admiring the sparkle of the stone, a clear teal like Caribbean waters. A pair of diamonds bounded the aquamarine on each side, and a silver setting fastened it all to a gold band.

“What about not mixing metals?” I said.

“Hush,” my mom snapped. But her eyes were fixed on the ring, instilling in it all the longing I would realize later was missing from her marriage. “That’s the one,” she said. But we didn’t buy it.

Walking away, she gave me instructions on bringing my dad back there. She opened her checkbook and used an extra piece of paper from the back to write down the stone, cut, setting, and price, and she handed that to me.

I don’t remember the exact price, something like $900, but I do remember opening the note and feeling sick, right there in front of the MAC counter. There had been “spaghetti days” in recent memory, days when we didn’t have enough to pay for dinner, but my dad in his inherited thriftiness could pull us through on $3 of ground beef and a box of spaghetti.

I remember thinking, There are better ways we could spend this money. But I was jealous, too. No one had ever bought me anything so nice as that ring.

Before 2017, I had never bought myself a single piece of good jewelry. Sure, I splurged on eBay for some bright chandelier earrings that cost less than $5. I snagged a bracelet at a street fair in New Orleans and some obviously fake CZ’s at Target. Sometimes I even still wear my mom’s pearl earrings, though I haven’t spoken to her more than ten years.

Until last year, I believed there was some unwritten rule preventing me from buying jewelry for myself. I just have to wait till I find the right person, I thought.

I’ve had no shortage of dates, that’s for sure. I’ve just never got far enough, I thought, for them to buy me jewelry.

Then came Will. He had bright green eyes and a Viking-like appearance, complete with the beard, but he also seemed wounded. I promised to take care of him. He made promises to me, too. We envisioned a life together as professors. I asked him to move with me if I got into a PhD program, and he said yes. He even talked about taking me to New York City. I’ve never been there before, and when I said I didn’t have warm enough clothes, Will offered me part of his inheritance: his beloved grandmother’s fur coat.

When Hurricane Irma turned toward Florida, I asked Will to help me put boards on my windows, but he didn’t respond to the text until time was almost up. I stayed in my house alone, and while the wind howled and branches snapped overhead, I kept thinking about him. He wanted to come help me, I told myself. He just couldn’t. You’re finally dating someone responsible. This is what it looks like.

We dated for another month after that. During that time, I drove to Winter Park every weekend. Will and I would walk along the shop-lined streets, looking in the windows as the sun went down. There was one jewelry store we always passed. Its displays emptied for the night, vacant décolletés and fanciful hands flaunting air beyond the polished glass.

I hate that I had to rediscover my own beauty. I hate that I lived so long with such contempt and disgust for myself souring my own heart. I hate that there are other women who live like that, probably women I see every day.

Over those weeks, our silences grew longer. I tried to fill them with Grey Goose, thinking that I would drink the more expensive vodka more slowly, thinking that the problem was me. I wasn’t thin enough, pretty enough, rich enough, available enough for him — until he tried to gaslight me and coerce me into an intimacy that I wasn’t ready for.

He told me I had the wrong idea about him. He said the future he and I planned was all in my mind.

“I deserve better,” I said to my friend Casey.

Casey, who had been divorced for several years, was in the habit of buying herself shoes, necklaces, and earrings. Her favorite purchase was a Return to Tiffany necklace with one sterling charm and another blue enamel one. She bought it before she left South Korea for the last time, a job and a marriage ago.

“If you want something, buy it,” she told me once over sangria at our favorite outdoor wine bar.

“I always thought boyfriends and husbands were supposed to do that,” I said.

“Honey, my husband never bought me anything. If I really wanted something, I had to buy it for myself.”

I mulled over her wisdom for a few weeks, and I came to three conclusions:

1. I wanted some Alex and Ani bracelets.

2. Ever since I was a little kid, I viewed jewelry as a kind of currency. It was something good little daughters, girlfriends, and wives received based on how much they were loved.

3. I love myself. I deserve better — better than Will, than my job, than how I treat myself.

I started looking at myself in the mirror every morning and seeing a light in my face that wasn’t there before. Though nothing had changed on the outside, I felt more beautiful. Every time I saw my own face, I felt more shocked that I didn’t hate it.

In following my “I deserve better” mantra, I quit my job and moved two hundred miles south to Boca Raton. I started a new job writing at a magazine, but I still hadn’t sold my house in Edgewater, and I was paying both exorbitant South Florida rent and my mortgage for three months.

Instead of saving my money like I should have, I bought books, clothes, organic food. I bought three Alex and Ani bracelets. They clink and slide against the laptop as I type this. The sound of them every day as I work at my desk reminds me that I need to look on myself with love and compassion.

Three bracelets doesn’t seem like much in the grand scheme. I bought them used, because no matter how much I love myself, I am a perennial cheapskate (another thing, I guess, I need to learn to love about me). I spent about ten dollars on each, but at the time, that was money I didn’t have.

The first bracelet I bought has my monogram, an R. The second was a “Path of Life” scroll, which signifies the wearer’s power over her own destiny. The last bangle I bought has a tall ship “Steady Vessel” charm, representing life’s journey, fortune, and change.

I know it’s problematic to feel the need to be loved with possessions. I’m still playing into capitalism and the patriarchy. I’m buying things I don’t need with money I don’t have, just like my parents, like how my mother twisted my dad into buying her that ring.

She felt there was something missing in their relationship, or maybe in herself, and the ring was a kind of balm to heal her.

That’s also a lot of weight to give a gift, and a lot of pressure to put on the giver. Whoever my future lover is, I can do them this one favor, and find wholeness for myself. Until then, I think I’m going online to shop for some more bracelets.

If you like this article, please share it! Your clicks keep us alive!
Tags
Love
self-love
jewelry
Relationships

Can't Buy Me Love: Why I Stopped Waiting For Men To Buy Me Jewelry
Rebecca Renner