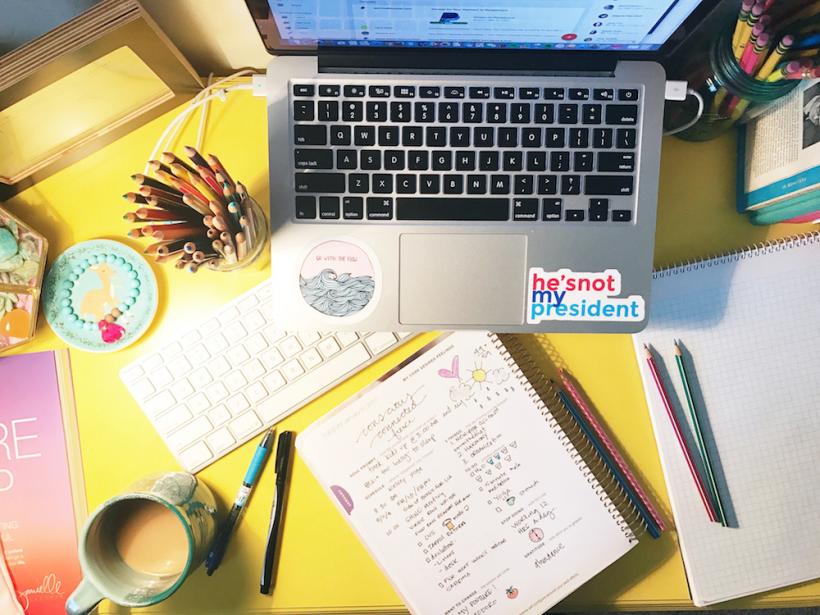 The hardest thing about taking a handful of psych meds every day isn’t the fact that it takes more than one glass of water to take them because I can only manage to choke down one or two a time. It isn’t the cash I dole out at the pharmacy once a month. It isn’t even the side effects — the weight gain, the dry mouth, the loss of sex drive, delayed (or completely blocked) orgasm, the nausea. No, the hardest thing about taking handfuls of psych meds everyday is that they work.

They work by grabbing my rollercoaster moods and taming them into more of a merry-go round. They work by preventing me from falling into the lie that depression sometimes tells you — that the world would be better off it you were not in it. They work by allowing me to sit on the sofa in the evening instead of vacuuming perfectly parallel lines into the carpet. They work by keeping me from doing things like running up all my credit cards, having sex with relative strangers, running until I break my leg (and then continuing to run), staying awake all night cleaning under the bathroom sink, or organizing my books by  color or genre or alphabetical by author, or writing. And writing. And writing.

I haven’t been up all night working in years.

This is the reason I take these meds, right? So I can live a life that seems relatively normal. Except for one thing: I don’t want to be normal.

You Might Also Like: I Take So Many Psych Meds, I Don't Even Know Who I Am Anymore

It feels great for a lot of reasons. One of them is certainly the euphoria that comes along with the high. But the thing that feels the best is the cultural feedback loop of hard work and reward. After years of living with mental illness in varying states of function and medication, I can tell you that the motivation to produce — content, art, intellect — feels intrinsic. I can also tell you that I believe it is far more extrinsic than we realize or are willing, or able, to admit.

We have a pandemic preoccupation with productivity.

We reward “hard work” with money and praise and admiration and envy. Which all seems like a perfectly reasonable and appropriate response to someone’s efforts. But what if the person who is doing the work is a person who has, by virtue of a chemical imbalance or deficiency, a mental illness that makes them believe that there is no limit to the amount of work that could or should be done?

I’ve been having a lot of difficulty writing lately. For a writer, there are few things more frustrating that staring at paper or screen for hours or days without so much as a starting line or subject matter. Every time I try to write and am unable to, I become increasingly  frantic, my frustration seems exponential. I can remember times I wrote with more ease — the middle of the night, when I was very sleep-deprived, or very sad or very happy, when I was at least a little (sometimes a lot) manic.

I told my husband yesterday that I worry that I’m only a very good (or even decent) writer when I’m at least a little manic. I worry that the words will not flow easily for me unless I am in a state of frantic sleeplessness. I worry that my meds work so well, that the wellspring of creativity has run dry right along with my mouth. My husband tells me he’d rather me be alive than a great writer.

What I do not tell my husband is the daily temptation I feel to just skip the meds, just long enough to get some work done.

What I do not tell him is that I feel worthless when I am not writing, creating, producing, doing.

Some of this is deep unresolved trauma left over from being the only child of an alcoholic. Some of this is, no doubt, the intrinsic pressure I mentioned before. But a lot of this, I would even argue most of it, is because our culture has made me feel that my worth and my productivity are directly proportional.

Because my mental health and my work and my worth are all so intertwined, it is often difficult, or even impossible, for me to unravel. Because everything I do everyday becomes part of who I am, and who I am depends largely, at least from my perspective, on what I do.

After Kate Spade’s death by suicide, I saw a letter written by her sister, Reta Saffo. Reta suggested that Kate was suffering from untreated Bipolar Disorder. While I can’t know that this is an accurate assessment of her mental health, and I can’t know what it’s like to run a multi-million dollar company, I do know this: my full-time job and life as a wife and mother takes literally every ounce of energy I have. I do know that running any company with that degree of success must take a lot of energy. I do know that the desire, the pressure to produce would for me, be enough reason to never treat the disorder than affords me that energy.

When I see seemingly successful, wealthy, and apparently stable people die from suicide, I always wonder how much of their depression or ideation was a result of their feelings of inadequacy or their need to simply do, to be, more. In a culture that is so driven to produce, how easy would it be to flush the meds that steal you energy? How easy would it be to stay up all night — writing, drawing, working, creating? How easy would it be to eventually fall into the inevitable post-high low, the consuming depression that lies to you so convincingly that you believe the world would be better off without you in it?

I do not want to live in a culture that would see me die for the sake of productivity.

I want to live in a culture that celebrates people for staying home from work when they are sick or for taking a “mental health day” when they are not at all sick but just want or need to spend time caring for themselves.

I want to be part of a world where no one ever tells anyone who is suffering to “pull themselves up by their boot straps” or where anyone says things like “push through” and “no pain no gain.”

I want to start a revolution where no one ever has to say “I’m tired” without being told to rest, where we recognize that real “productivity” is not at all objective, where no one ever feels so compelled to produce that they would die for the sake of it.

I want to take my meds and sleep at night and work during the day for a reasonable number of hours and never be a hundred thousand dollars in debt or cheating on my husband or screaming at my kids. I want my productivity to be valued but not as much as my life.

Suffering Is Not Success: What I’ve Learned In A Year Of Self-Care

The “Perfect Attendance” Award: Are We Promoting Suffer-Culture?

Why Did I Wait So Long To See A Psychiatrist? And At What Cost?