Eating Pizza Out Of The Trash Can: My Struggle With Obsessive Overeating​ 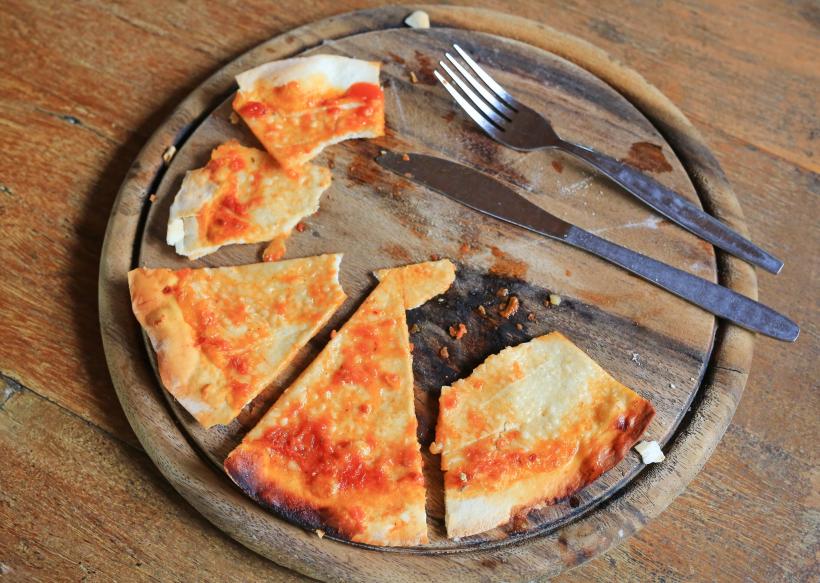 I took and ate food out of a public trashcan. This is my struggle with obsessive overeating.​

I was working the cotton candy machine at my kids' school carnival. My daughter, a second-grader, was hanging out with another mom and me. My daughter said she was hungry, so I asked the other mom if she could hold down the fort while I took my daughter to the pizza stand. I bought her one slice and a bottle of water.

As we walked back, I was already thinking about how much I wanted to eat the crust of her pizza. The melted gooey cheese, tang of tomato sauce and doughy crust is one of my faves. I asked my daughter to please save it for me. She had no idea how urgent my request was.

You see, at the time, I was about five months into recovering from compulsive overeating, an eating disorder.

"Compulsions go back to a time in our life when we feel we weren't satisfied by how our parents soothed or comforted us in times that were difficult or stressful," notes Mark Magerman, PhD, LCSW, BCD, Gestalt Psychotherapist. "Consequently, when those needs aren't met, we seek out ways of soothing ourselves, and food can be one of those things."

While I hadn't binged in awhile and considered myself "abstinent," I still had an obsession with food and compulsive tendencies I was trying to work through. That day, my daughter's slice of pizza had activated my obsessive thoughts about food.

A large slice of pizza on a flimsy paper plate can be challenging for a seven-year-old to balance on her lap, and it didn't take long for the pizza to slip off the plate down to the ground. Even though it landed crust-down, and I'm a five-second-rule mom, this pizza was trash.

I took my daughter over to get another slice and explained to her that she really needed to hold onto the plate so the pizza didn't slide off again. I was still thinking about the crust and reminded her, somewhat frantically, that Mommy wanted to have it. The next thing I knew, I saw my daughter walking about 15 steps to the large trashcan in the middle of the food area to throw out her plate. I actually scolded her for not saving the crust for me as I had asked.

Suddenly I realized with horror what I had done. In front of a bunch of parents, teachers, and children I knew, I took and ate food out of a public trashcan. Who saw me do that? How could I explain what I had done? Did my daughter see me? What was wrong with me?

Without even thinking, I went over to the trashcan. Fortunately, the trash was piled pretty high. My daughter's paper plate with her napkin placed neatly over the remaining bites of pizza and crust was sitting right there on top.

I started eating the bits as I walked back to the cotton candy station. The crust was burnt, and it didn't taste good. I like a doughier crust, but that didn't matter. My mind had been made up to eat that crust, and in my disordered brain, there was no turning back.

Suddenly I realized with horror what I had done. In front of a bunch of parents, teachers, and children I knew, I took and ate food out of a public trashcan. Who saw me do that? How could I explain what I had done? Did my daughter see me? What was wrong with me?

I immediately sought out my husband who was walking our five-year-old son around the carnival. In tears, I whispered to him what I had done. He comforted me, but I was still so ashamed. Then I sought out a friend who had a similar eating disorder. Ever the practical person, she told me that it was done. I couldn't change it; I needed to move on. I knew she was right, but it wasn't until the next day that I could truly put it behind me.

Sadly, this was not an isolated incident. It was, though, the most public. I have pulled food out of my home trashcan and off of other people's dirty dishes while taking them to the sink as trash. I have eaten foods that were frozen and foods that were undercooked — all because of some unexplainable, frenzied feeling.

From about the age of eight or nine until I was just about 40, I was a compulsive overeater/binger/food addict. During that time, I was more often than not obsessed with food. I had no idea why; it was just how I was made. I never knew that it was a sickness until I heard the words Overeaters Anonymous (OA) at a time when I was receptive.

As most who receive any diagnosis, I knew I had to fight this disease. I was all in because being obsessed with food and binging uncontrollably was something I had to struggle with every day of my life for decades. It was a secret I kept from everyone. Finding out there was a name for my feelings and actions was a relief. While I was ashamed of having an eating disorder, it was great to have a "compartment" to put this diagnosis in so that I could start to recover. It was a catalyst for finding out what made me tick.

Though I was concerned about the stigma of seeing a therapist, I went anyway. I started going to Overeaters Anonymous meetings, began blogging anonymously about recovery, and read a lot of great books. All of these things have contributed to me being just shy of ten years abstinent — or sober, a more mainstream word — as I approach my 50s.

I remember being shocked during my first few OA meetings. Yet, at the same time, I was comforted by the fact that I was not alone. It oddly felt like coming home.

It never occurred to me that there were others who had the same irrational thoughts about food.

I did a lot of crying in those first few weeks as I started on the road to recovery. I couldn't explain the emotions that were overwhelming me. I was crying out buried feelings I didn't even know were there. There were tears of relief because I now knew that I wasn't alone. There were tears of utter shame from the stigma I believed existed. But I think mostly they were tears of catharsis — a cleansing of 30 years worth of secrets that were finally starting to bubble to the surface.

Though the day I ate pizza from the trash during the carnival was a long time ago, it's still a tangible, vivid reminder of how entrenched I was in my eating disorder for more than half my life. I was letting a mere object — food — control my thoughts and my life. Therapy showed me that I chose food as a coping mechanism for the things I couldn't control in my childhood. Overeating was a defense mechanism to help me deal with what was going on around me.

As I healed, I learned that I no longer needed food to cope as an adult. I'm so grateful that, with a lot of hard work and help, I can live a more well-rounded life. I choose every day to take that power back.

If you like this article, please share it! Your clicks keep us alive!
Tags
obsessive overeating​
Food
overeating
Eating Disorders

Eating Pizza Out Of The Trash Can: My Struggle With Obsessive Overeating​
Ronni Robinson